When you were a kid, your concept of pasta was more than likely framed by heaps of noodles drowned in a goop of sauce. There may have been meat involved, either scattered about in crumbles or in balls of various oblong design. Bread hung out nearby, ready to push dinner remnants from your plate to your spoon. This brought us joy. To an extent it still does, especially since these are likely the same experiences your kids are currently having if you’re of a certain age.

Yet pasta prepared for the grown-up set can be something far more complex than this; an advanced menagerie of flavors and textures that thrills our expanded epicurean sensibilities to no end. There are plenty of ways Newport Beach restaurants showcase this fact, including a few that are elevated plays on dishes you may have enjoyed during the halcyon days of your youth. These dishes won’t replace the fond memories of days gone by at the dinner table, nor are they designed to. What they are capable of, though, is bringing all of that childhood pleasure derived from your mama’s deep pasta pot into your adult life. 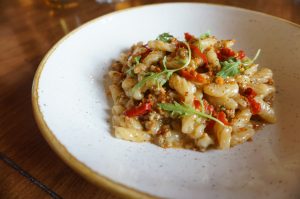 Andrea
The Resort at Pelican Hill looks as if it was plucked directly from Tuscany’s undulating hills and carefully nestled into Newport Coast. So it would make perfect sense that its flagship restaurant would produce transcendent Italian fare that connects to the Old Country, which it does with stupendous aplomb. Executive Chef Jonah Amodt artfully fortifies this special link with creations like the sublime hand-made Ricotta Cavatelli “Norcina.” Featuring nduja sausage and Umbrian summer truffle sauce, Amodt’s nimble pasta creation walks the fine line between simplicity and indulgence, much like a proper trip to Italy should. 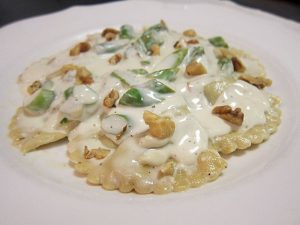 Canaletto Ristorante Veneto
It’s easy, if not expected, for a restaurant to stuff their ravioli with meat or cheese. Stuffing them with pears is a different story. Yet the Casonzei Con Stracchino e Pere served at this Fashion Island venue makes filling the pastry pillows with fruit seem perfectly natural. Roasted pear and Mozzarella are expertly enveloped by carefully crafted house-made ravioli, which are tossed in an asparagus and cheese sauce and topped with walnuts for an extra crunch. It may change your perception of ravioli forever, and that’s not necessarily a bad thing. 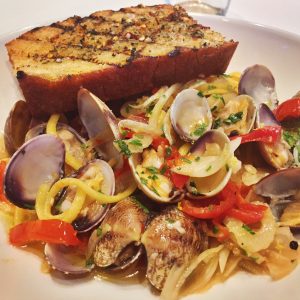 CUCINA enoteca
If pasta wasn’t an ideal conduit for creating internal energy, it’s doubtful the phrase “carbing up” would have so much impact. And as any seasoned shopping veteran will tell you, spending a day browsing and shopping requires a healthy dose of personal fuel. To that end, the Saffron Linguine served by this Fashion Island eatery can be an essential lunch dish that properly prepares you for an afternoon of retail exploration. The dish’s star pasta item is joined by clams, fennel, orange, peppadew, and fettuna (think highly evolved garlic bread), creating an immensely flavorful dish whose light touch won’t overstuff you, unlike the bags carrying the spoils of your post-spree haul.

Il Farro
This intimate Balboa Peninsula eatery shares its name with farro; a humble little grain known for being high in fiber and very low in cholesterol. The pasta made here is made exclusively from the grain, which means sumptuous dishes like the Farucci Della Casa are a touch healthier than you may expect from a pasta dish. But don’t think of it as health food; instead, think of it as a wonderfully rustic creation of tubular pasta with chicken, sun dried tomatoes, fresh tomato, extra virgin olive oil, and garlic sauce. It’s the type of simple, unfussy pasta dish you’ll crave after a slow, romantic stroll along the Balboa boardwalk. 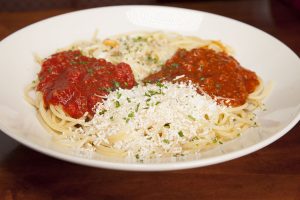 The Old Spaghetti Factory
It’s entirely possible that this locale was the first place you experienced “grown-up” pasta. After all, the family-friendly venue has been a venerable Balboa Peninsula staple since 1975. It’s still a vibrant part of Newport Beach’s culinary landscape because it doesn’t solely rest of nostalgia. Case in point: their signature Potpourri is every bit as good as you remembered it being, if not even better. Consisting of equal parts meat, clam, and marina sauces along with their signature Mizithra cheese & brown butter, it also serves as the perfect pasta plate to introduce to the burgeoning foodie in your life 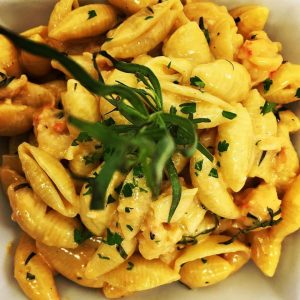 Patty Macs
Mac ‘n’ cheese’s ascent from childhood staple to gourmet pasta indulgence has not been without its pressures. For instance, if you’re going to launch a dining concept partially devoted to kicked-up versions of the kid favorite, what you’re whipping together better be excellent. This mac-n-cheese-focused eatery on the Balboa Peninsula is well-aware they are of this truism, and this knowledge is arguably best evidenced by its Lobster Mac. It’s not just the fresh chunks of lobster that makes this dish so decadent; the crustacean’s meat is joined by gruyere, fontina, mascarpone, cognac, and tarragon. Try finding that combination in a store-bought blue box. 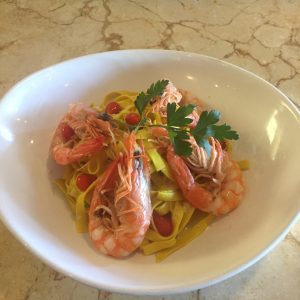 Pirozzi
Handmade pasta is an art, and restaurants that use their kitchen as a pasta-making canvas never cease to impress. Yet Alessandro Pirozzi, the acclaimed owner-chef behind this eponymous Corona del Mar eatery, found a way to make this creative work even more impressive. The house-made pasta featured in his Taglierini Ugo dish is infused with homemade limoncello, a pasta process Pirozzi co-created with the dish’s namesake, Ugo D’ Orso. The results of such epicurean sorcery is pure magic – particularly when enjoyed with the giant prawns, shallots, and the fresh local lemon and pinot grigio sauce that composes the rest of the dish.

Pizzeria Mozza
A weekend pasta meal shared with friends and family will typically involve lot of happiness, a little chaos, and a touch of sorrow when you realize all the pasta’s been devoured. The popular joint does an excellent job of synthesizing this vibe in its Mariner’s Mile location each weekend, albeit in a much more civilized manner than what may materialize in your abode. They’re able to do so by whipping together their layered, luscious, and limited Lasagna al Forno every Friday night. “Limited” is the key word here; once the last square of lasagna is gone, it’s gone; retired off the menu until next Friday rolls around. If you miss out, sorrow may ensue.

Sapori Ristorante
Seafood-centric pasta dishes are terrific, especially in a coastal community like Newport Beach. Yet it could inadvertently lead you into a selfsame rut lined with shrimp, clams, and scallops. If you’re stuck amongst the shellfish, the Farfalle al Salmone created by this romantic Italian venue just north of Balboa Island is ready to pull you out. Fresh salmon is the seafood star of this dish, accompanied by bow-tie pasta and doused in a rich tomato cream sauce. It’s a decadent treat that showcases salmon’s oft-underrated versatility as it provides a delicious respite from the same-old, same-old. 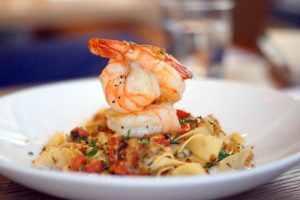 Tommy Bahama Island Grille
Proper pasta dishes aren’t solely the domain of Italian restaurants. If you’re skeptical of this, the Roasted Shrimp Pappardelle Pasta served at this Fashion Island-adjacent venue gives you all the evidence needed to convince you. The dish works so well because it holds firm to a tropical influence without feeling gimmicky, as wide pasta and plump prawns are accompanied by a citrus gremolata and a lemon parmesan broth. Add a nice touch of spinach and fresh herbs to the mix, and you have a uniquely flavorful dish that connects the Pacific with the Mediterranean.