Is there anything better than a juicy burger? No need to respond, since the answer is obvious. You clearly don’t need extra incentive to enjoy a hamburger, but May is National Burger Month, and Newport Beach has some of the best burgers in Orange County.

This moody stand-alone restaurant on PCH, near the 55 freeway on-ramp has featured “gourmet dining since 1926.” A Restaurant features wood tables and walls, red leather booths and some stiff drinks at the bar. Chef Jon Blackford hails from Pittsburgh, part of the Rust Belt, and he’s clearly got a firm grasp on culinary Americana. Their A Burger ($14) lives up to the grade. A Niman beef patty comes topped with caramelized onions, blue cheese, arugula, bacon and 1000 island dressing. Expect to get your hands messy. 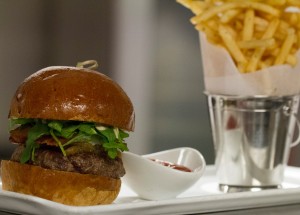 This waterfront gastropub inside the Balboa Bay Resort celebrates nearby Anchors and Oceans and features a huge menu of dishes “to share.” Still, chef Vincent Lesage recognizes that A&O’s burger is a beast, and on rare occasions, it’s best “not to share.” 8 oz. Kobe Burger ($18) is one such dish, with a premium Kobe beef blend cooked in a Garland broiler before it’s piled with baconaise, heirloom tomato, grilled romaine, and pickled onion on a cheddar bacon bun. 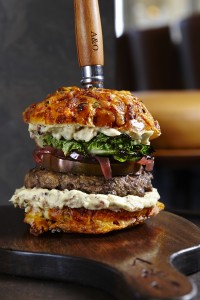 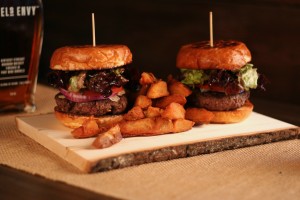 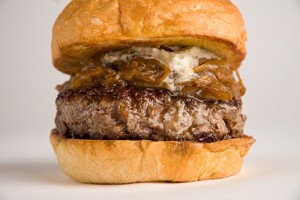 Northern Newport Beach houses the second branch of Eat Chow, which has been a comfort food hit in nearby Costa Mesa for years. Brian McReynolds, Amy Curran and Francisco Perez oversee a space set back from PCH with skylights and “EAT” in big red letters on the wall. The Chow Burger ($12) stars grass-fed chuck. From there, the chowsters pile tomato, shaved red onions, arugula, pepper Jack cheese, mustard aioli, and chipotle ketchup on a toasted brioche bun. 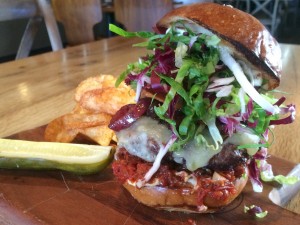 Proprietor Ron Schwartz is celebrating 40 years of Muldoon’s Irish Pub, which debuted in 1974 near a young Fashion Island. The pub is well known for Doon’s Burgers, which feature certified Angus beef, weigh 8 ounces, cook on a natural gas grill and come with either hand-cut fries (if you’re smart), chips, coleslaw, fruit or greens. Burger variations include St. Paddy’s with Dubliner cheese, bacon and avocado on a fresh-baked bun, which makes it feel like St. Patrick’s Day year-round. 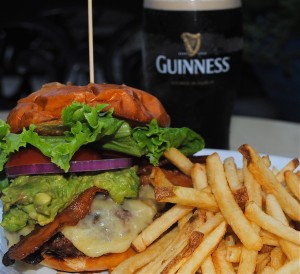 Chef Marc Johnson, a protégée of longtime Studio chef James Boyce, helms culinary operations at the Island Hotel at Fashion Island. The property’s marquee restaurant, Oak Grill, features a Butcher’s Burger ($14) with a blend of all-natural Brandt beef short rib, chuck and sirloin. The patty cooks on a gas grill that can also burn wood chips if a dish calls for smoke. Tomato bacon jam, white cheddar, and a sturdy potato bun all complement the burger. 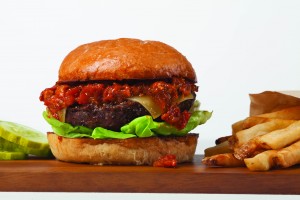 This restaurant near the Fun Zone and Balboa Pavilion on bustling Balboa Peninsula is best known for deluxe mac and cheese, but don’t sleep on their Pan Seared Cheese Burger ($12.95). This griddled delight pairs a substantial 8-ounce patty with caramelized red onions, Oregon-born Tillamook cheddar, arugula, and roasted garlic aioli on a brioche bun. 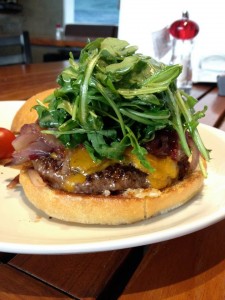 The Hillstone Restaurant Group has earned national acclaim for their burger at Houston’s, and they serve a variation at Gulfstream and the Fashion Island branch of latest restaurant concept, R&D Kitchen. This family member champions research and development, though they don’t experiment too much with their Cheeseburger ($15). A ground chuck and brisket patty cooks on a flattop and comes with lettuce, tomato, pickles, onions, cheddar, mustard, mayo and hickory sauce on a satisfying house-made bun. 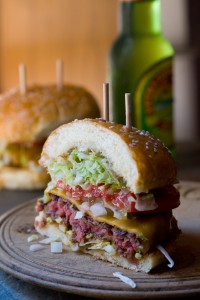