10 Must Try Lobster Dishes in NB

Newport Beach’s dining scene has a lot in common with the lobster. They are oftentimes considered synonymous with luxury. They are also often a lot more versatile than what they’re given credit. It makes perfect sense that you would be able to use lobster as a conduit for exploring the diversity of Newport Beach dining. By cozying up to the following lobster-based items, you’ll be able to treat your taste buds to elegantly composed dishes, as well as fare that could qualify as unapologetically casual.

Andrea Ristorante
Artistry is a big part of the dishes created at Pelican Hill’s flagship restaurant. Their lobster-centric pasta creation, Lobster Tortelli, is certainly no exception. Chef Marco Crisculo’s flower-like presentation of the entrée makes it appear as if it was plucked fresh from a garden. Perhaps it’s this way because part of the dish is regionally cultivated. The squash blossoms and green asparagus that festoon the dish are freshly harvested from Irvine Ranch, just like the rest of the fruits, veggies, and herbs used here. The visual aesthetic is a perfect match for its flavors, which remains balanced and nuanced through the last bite. 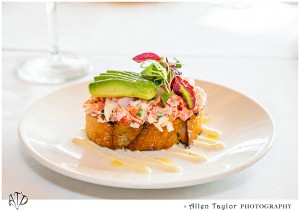 Bayside Restaurant
Lunch can be a meal that is sometimes eaten in haste due to elongated meetings and surprise deadlines. Yet even if you’re having a busy day, Executive Chef Paul Gstrein’s afternoon delight is worth taking the time to savor. His open-faced Lobster Salad Sandwich is visually captivating. Chopped lobster meshes with avocado, petit greens, and a plate-based drizzle of lemon aioli to create a color scheme evoking the brightness of a proper afternoon on the Newport Back Bay. The ingredients play off each other rather brilliantly, creating a refreshing flavor profile that liven your palate and your day, even if you have to go back to work. 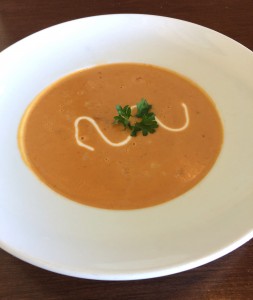 Harborside Restaurant
A memorable lobster dish will oftentimes evoke its surroundings as you eat, which ends up making your meal all the more magical. This aspect is played to the hilt at this historic waterfront property, courtesy of Lobster Bisque, a warm, rich starter. If it were served on a landlocked property, this soup of chunky Canadian lobster, tomato, and untold amounts of butter and cream would be quite tasty. Yet when you indulge in its goodness while watching yachts and Duffy boats flit about shimmering blue Newport Harbor through panoramic windows, the bisque becomes transcendent.

Newport Beach Brewing Company
It’s no secret that people pack this Balboa Peninsula joint to imbibe in the sudsy voodoo that brewmaster Derek Bougie creates. Yet the venue’s Gourmet Lobster Mac ‘n’ Cheese, a lobster-infused take on a childhood favorite, is well worth enjoying between pints. The dish works so well because it just isn’t a heap of lobster meat plopped in the middle of generic noodles and sauce. Rather, the crustacean joins a quartet of cheeses, nutmeg, cream, and breadcrumbs to produce an indulgent treat bursting with rich flavors and complex textures. Not surprisingly, you’ll also be able to find beer pairings. 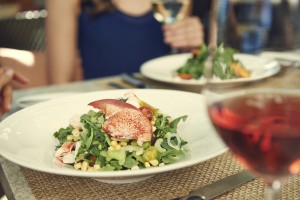 Oak Grill
Everyone knows that lobster can be indulgent. In the right context, it can also be refreshing. Case in point: this lobster-based Maine Chopped Salad served up by the Island Hotel’s flagship eatery. The colorful components of Executive Chef Marc Johnson’s dish mix bold flourishes and breeziness. The bite of red onions and the zing of the rocket arugula add plenty of complexity on the palate. Yet there is no question that the lobster and all of its sweetness stand out as the definitive star. This is the exactly the kind of salad that you’d want with a glass of rosé on a late afternoon or an early evening. 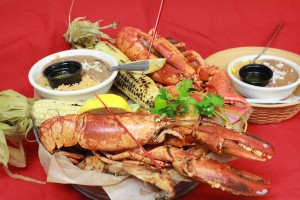 Rockin’ Baja Lobster
You might expect a beachfront place specializing in Baja California coastal cuisine would offer a take on Puerto Nuevo’s famed lobster dinner. They do, and their autentico lobster feast is pretty spectacular. You and your dinner date can fight over a half-dozen flash-fried lobster halves, seasoned with a gentle Mexican spice kick and served in the restaurant’s signature silver Baja bucket. Add the meal’s grilled corn on the cob, Mexican rice, and ranchero beans into the mix, and you have a meal that captures the true essence of the humble fishing village from south of the border. 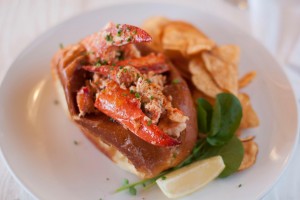 Slapfish
You won’t find white tablecloths or mood lighting at Owner/Chef Andrew Gruel’s Balboa Peninsula joint. What you will find is a simple sandwich that showcases lobster in its purest form. Their lobster roll can either come piping hot with drawn butter or chilled with lemon mayo or what is clandestinely referred to as “awesome sauce,” which is, in fact, awesome. The basic sandwich components prior to saucing are 100% lobster claw, tail, and knuckle meat stuffed in a yummy bun. It’s the perfect bite to wedge in your mouth after a day hanging out at The Wedge.

SOL Cocina
SOL Cocina’s so-close-you-are-almost-in-the-water view of Newport Harbor practically beckons you to dine on lobster. Owner/Executive Chef Deb Schneider caters to this desire by creating a lobster dish that taps into her passion for the flavors of Baja California. Lobster Tails with 3 Salsas features two Maine lobster tails that are precisely split, grilled Puerto Nuevo-style, and served up with zingy garlic butter and a trio of salsas that range from gentle to aggressive. The dish is also presented in a manner that matches the scenery that lay seemingly within a finger’s reach of the restaurant’s large windows. These lobster tails remind you that living and playing in Newport Beach does have its advantages. 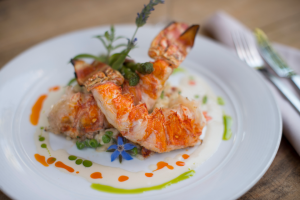 The Winery Restaurant & Wine Bar
The Winery’s Executive Chef Yvon Goetz has a knack for putting together dishes that look as pretty as the restaurant’s floor-to-ceiling view of Newport Harbor. Composition is certainly one of the reasons why his take on the classic appetizer is so appealing. The Maine Lobster Napoleon’s plump seafaring stars are carefully arranged atop a mélange of baby Dutch potatoes, Granny Smith apples, and an heirloom tomato-tarragon coulis, resulting in a brightly hued starter that’s almost too beautiful to eat – almost. Each ingredient is placed with a distinctive purpose; the inherent sweetness of the lobster meat is balanced by the potato’s earthen tones, while the apples and coulis give each bite a tangy finish. Order this, and the mood you’d want for a waterfront fine dining experience will be firmly established. 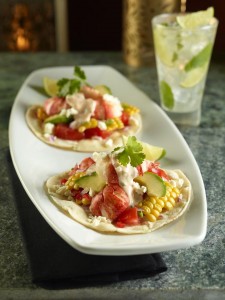 Wildfish Seafood Grille
A lobster taco that’s worth eating must have two elements; great lobster meat and a great tortilla. Wildfish delivers on both counts, which is why their Maine Lobster Tacos are some of the best around. It’s not too surprising that they’d knock it out of the park with lobster – preparing exceptional seafood is kind of their thing. But they also cradle the protein with warm tortillas that are made in-house, adding a much-appreciated layer of authenticity. Topped with a grilled sweet corn pico de gallo salsa, this appetizer is the terrific way to kick off a blissful meal.