Locals and tourists alike are drawn to Balboa Island for its charming appeal. Whether you’re browsing the shops, or just spending a leisurely day with family and friends, the delightfully picturesque setting of the island invites you to linger for a while. Whether you’re looking for something casual from a grab-and-go counter, or a fancier, sit-down meal, you’ll find many Balboa Island Restaurants that suit your taste. Here are ten suggestions for you to nosh on. 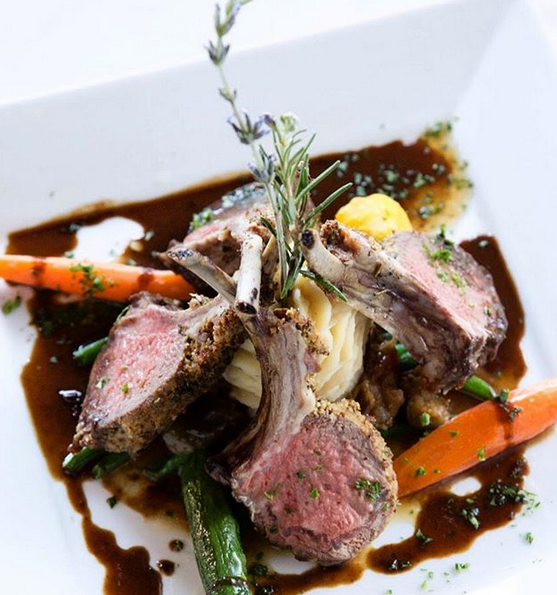 Basilic
This little French-Swiss eatery first opened its doors in 1997 and has remained a Balboa Island feature for more than 20 years. Chef/owner Bernard Althaus cooks each dish to order, paying extra attention to detail. These personal touches are passed on to every guest who walks through his doors. The intimate and romantic 24-seat Balboa Island restaurant is perfect for special occasions, or simply, treating yourself to an exquisite meal. Choose the Tasting Menu especially designed by Chef Bernard, or select from the a la carte menu with classics such as Traditional Raclette, or Onion Soup. Then, try the mouthwatering Coq au Vin, Steak au Poivre or Basilic Bouillabaisse as your main course. 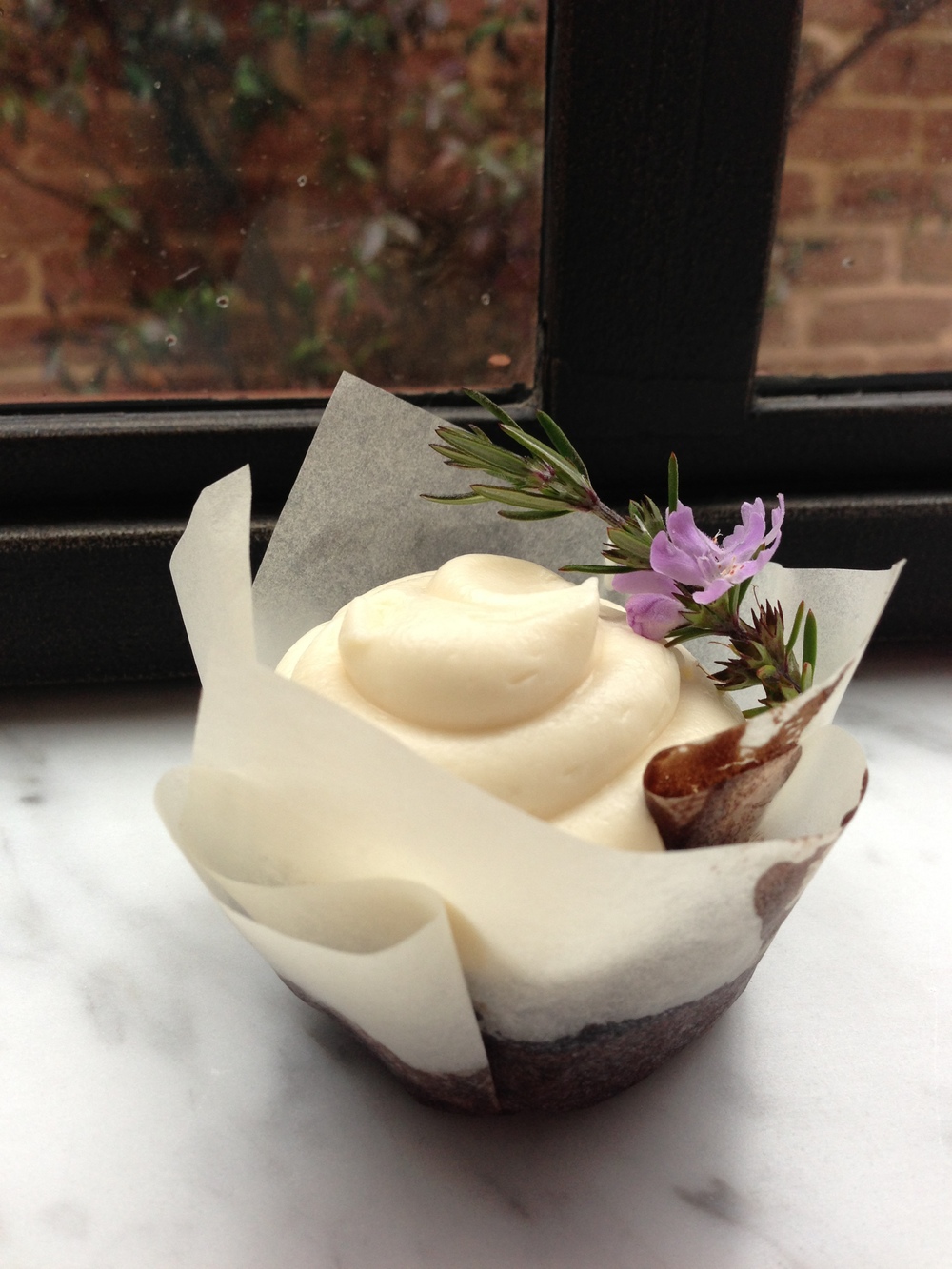 Blue Chair Bakery
You won’t miss Blue Chair Bakery while strolling down Marine Avenue. And even if you happen to walk pass the distinctive red door, the enticing aromas wafting through it will stop you in your tracks. Longing for the nostalgia of days gone by? Then look no further than Blue Chair Bakery, where everything is prepared from scratch, daily with recipes handed down the generations. The simplicity of the 1950s is right at your fingertips with an array of breakfast pastries, breads, and desserts, that’ll make your heart sing. The cinnamon rolls and sticky pecan buns are legendary, and sell out quickly, so get here early before you start browsing the island.

Free Range Cafe
An independently owned and operated neighborhood cafe, Free Range is only a block from the ferry landing with both inside and patio seating. Open seven days a week, this Balboa Island restaurant offers breakfast, lunch and dinner, and the menu is an eclectic mix of LA food truck fare, such as Chicken Sausage Biscuit, and Fried Chicken sandwiches, as well as vegetarian options like Spinach Omelet and Thai Crispy Rice Salad. A rotating menu, of weekly specials, keeps guests coming back for more. On Sundays, enjoy brunch with a myriad of selections from Biscuits n Gravy, Chicken and Waffles, to Eggs Benedict and Brioche French Toast. Satiate your sweet tooth with the selection of fresh pastries baked fresh daily. 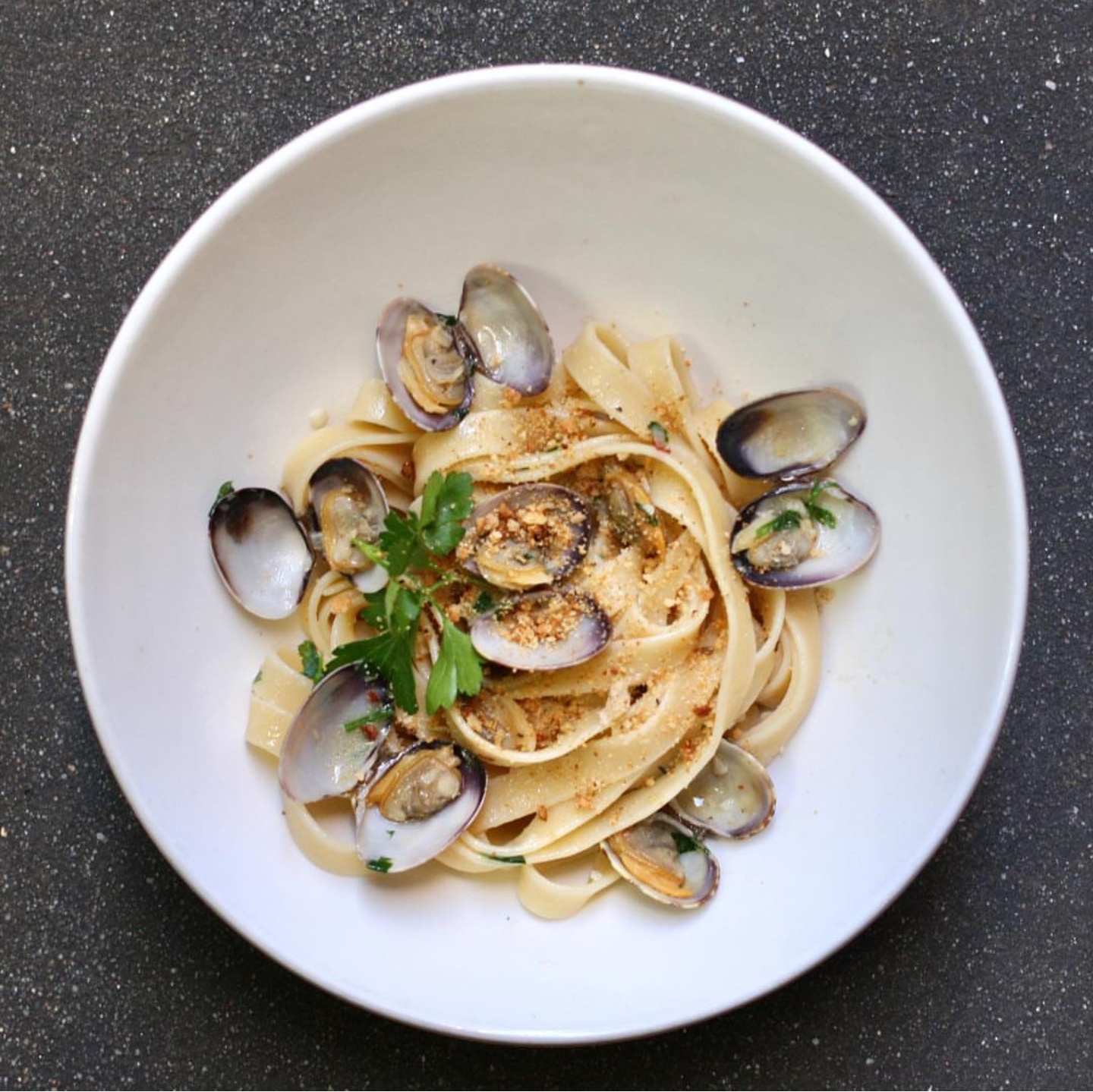 Mr G’s Bistro
Owner Giuseppe Accardi – fondly known as Mr G – has successfully blended together the splendors of Italian Sunday Suppers with friends and family, together with the casual laid-back Californian environment. With dazzling food and wine, coupled with the Italian spirit of warm hospitality, it is no surprise that Mr G’s Bistro was voted as one of OC’s Best New Restaurants in 2017 by the OC Register. Sink your teeth into the Prosciutto di Parma sandwich at lunchtime, or choose from marvelous handmade pastas such as the classic Carbonara or Cacio e Pepe. Large plates are also available featuring Branzino or the Chef’s Special of Tenderloin Filet Mignon. A stellar wine list means you’ll always find the right pairing to accompany your meal with.

Picante Martin’s
A fixture on the Orange County dining scene since 1972, Picante Martin’s serves authentic Mexican food to a wide audience, on a daily basis. This casual stop is a favorite of locals, where it is the perfect place to grab a quick bite on-the-go. The menu is predominantly Mexican, with a handful of sandwiches, burgers and salads thrown in. Alternatively, there are tortas — Mexican sandwiches – if you’re looking for something a little different. Specialties include Chicken Mole, Carnitas, and Chile Verde. Other favorites like the Chicken Tortilla Soup or Albondigas Soup, are hearty offerings to warm the soul with. 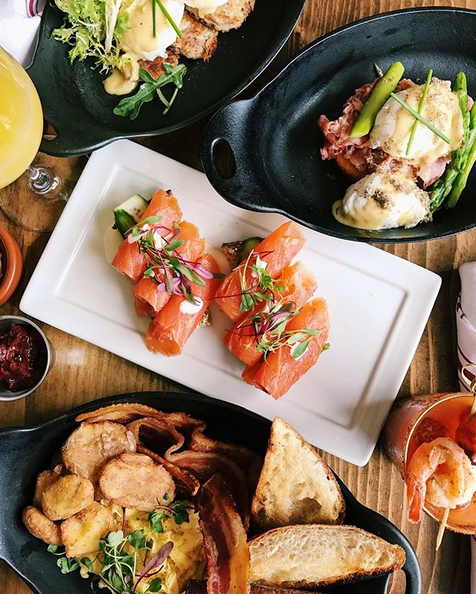 Royal Hen
Royal Hen is an upscale pub with unique and tasty fare that is both comforting and heartwarming. Pair with that an extensive selection of wines and beers and you have a winning combination. The restaurant is open six nights a week serving notable pub fare such as Craft Ale Fish & Chips and Chicken Pot Pie. Equally impressive are the Californian-inspired dishes like Roasted Chioggia Beet Salad and Achiote Hangar Steak Tacos. Don’t forget to try one of the craft cocktails on the menu specially created for the restaurant including Sour Hen, and Silk Road Sazerac. 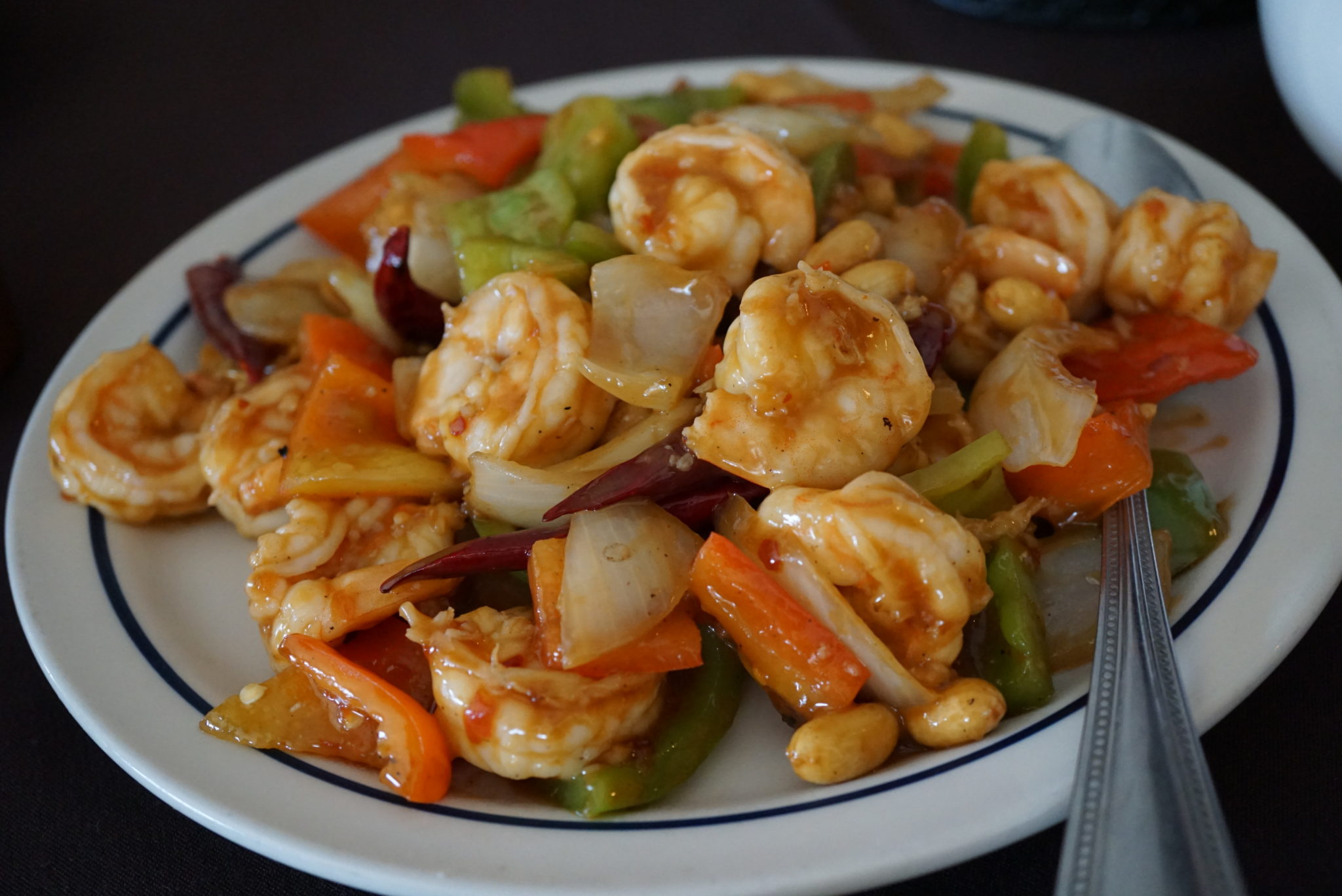 Shanghai Pine Garden
As the only Chinese restaurant on Balboa Island, Shanghai Pine Garden has been serving the Balboa Island restaurant community for decades. Affordable lunch specials are served on weekdays with an array of entrees to choose from. Timeless favorites such as Mongolian Beef, Kung Pao Chicken, Orange Beef and Honey Walnut Shrimp are always popular. What sets the restaurant apart is its desire to cater to those who have adopted a healthier lifestyle. The New Shanghai Health Platters section consists of lighter options, offering steamed vegetables in place of stir-fried. Those who have adopted a gluten-free lifestyle may ask about items that suit their diet. Whether you’re eating in, or taking out, Shanghai Pine Garden is THE spot for Chinese food while on the island.

Trattoria Mediterranean Cuisine
Sean and Elie Dadmand, proprietors of Trattoria, an informal, little Italian-style, eatery, are proud of their genuine, affordable family-style cuisine. Trattorias in Italy are usually family-owned and operated, and can be found in neighborhoods, small towns or rural areas. Here on Balboa Island, that sentiment is not lost in the Dadmands’ emphasis on serving their community surrounded by a cozy European atmosphere with heartfelt dishes from their kitchen. From intimate receptions, rehearsal dinners and family reunions, to celebrating an anniversary or birthday, Trattoria strives to make your special event a memorable occasion.

The Village Inn
Located at the heart of Balboa Island lies The Village Inn, a Balboa Island restaurant with a rich history within the Newport Beach community. Specializing in contemporary American cuisine, the Village Inn offers a range of seasonal menus during breakfast, lunch and dinner. A wide selection of craft cocktails, draft beer and a domestic wine list allows guests to enjoy a libation or two with a newly launched menu of dynamic food choices that will appeal to everyone. Choose from an array of salads, sandwiches, pizzas and tacos, as well as vegetarian options to tickle your fancy. Try the new VI Filet Burger – the Village Inn’s take on a steak sandwich – which sees grilled filet of beef topped with Cheddar and Swiss cheeses, sautéed mushrooms, crispy onions, lettuce, tomato and house-spread, all sandwiched between a telera roll. 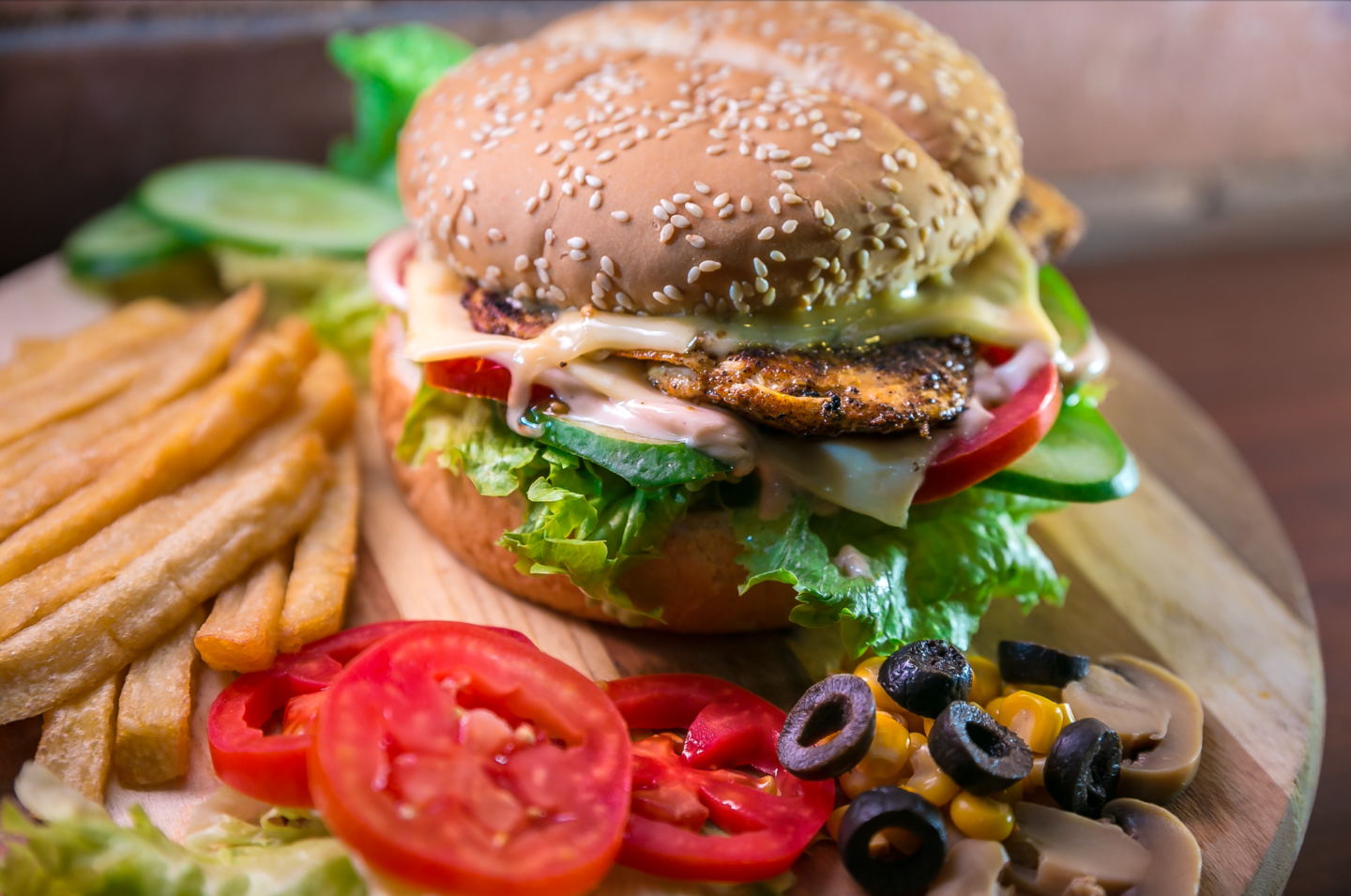 Wilma’s Patio
Wilma’s Patio has been a favorite of visitors and locals for over three decades. Offering an extensive breakfast menu, including many egg dishes, pancakes, waffles, and the famous Belly Bomber, this Balboa Island restaurant also serves a huge lunch crowd with its fresh salads, sandwiches, burgers, and authentic Mexican food. During dinner, diners may indulge in seafood, pasta, or other hearty options such as homemade meatloaf, and much more! Beer and wine list and children’s menus are also available. This family-oriented restaurant encapsulates the epitome of what Balboa Island is all about.