Welcome Back Rams – Where to Catch a Game

Its that time of year! Newport Beach residents and NFL fans have filled out their brackets and are watching closely every Sunday as various teams take on a new opponent. Cheers can be heard throughout the neighborhood after at the start of each game, after a stellar play or sometimes a devastating upset. The cheering is amplified this year as the community welcomes back a not so new NFL team – the Los Angeles Rams! Their return brings back the popular blue and gold jersey that was once the go-to fan favorite, adding an array of color to the already vast sea of jerseys that can be found in the sports bar scene here in Newport Beach. After 21 years of no NFL football team in Los Angeles, fans celebrate the opportunity to root on a team with local ties. Their return increases the already abundant group of fans visiting all of the favorite Newport Beach bars. 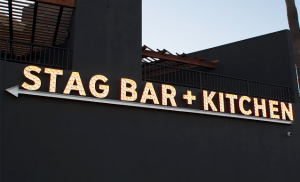 One bar in particular has really embraced the Rams comeback; Stag Bar & Kitchen welcomed them back with a “Welcome Back Rams Party and Charity Fundraiser” back in August. The event featured guest appearances by former Los Angeles Rams Players, including defensive back LeRoy Irvin and Mike Lansford. Irvin stepped in as the guest bartender for the evening serving up the “Horns Up Ram-arita” to anyone in attendance. One hundred percent of food and drinks sales were donated to the local charity, Give Cancer the Bird. Being that Stag is so dedicated to this team, one could say that Stag Bar & Kitchen is a Rams bar – a place for all of their fans to gather and cheer the team on in unison. All fans though should consider this as a Sunday football-watching destination. The pool tables, abundance of televisions amazing Saturday and Sunday brunch menu make this a great viewing choice. Their abundance of finger-food appetizers ensures all football fans get their fix of game day foods. 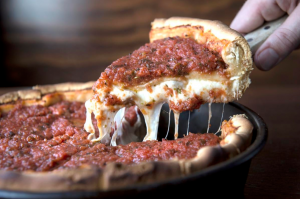 Cruisers Pizza Bar Grill is another bar with an unsaid dedication to a few teams in particular. Owners Alex Petrosian and Bud Wierenga are biased to their own favorites. Alex is a Green Bay Packers fan, while Bud is a fan of the Chicago Bears. It’s a house rivalry that has out this bar on the map as an award-winning sports bar in Newport Beach. For that reason, many fans would argue this bar to be a Green Bay Packers and Chicago Bears bar, although all sports fans are welcome. The bar is equipped with 30 big screen HDTVs and a 170” 4K projector in their man cave of a sports room. Their patio livens up half time with Ping-Pong tables, corn hole and giant Jenga. Well known for their Chicago Stuffed Pizzas, Cruisers in the perfect bar to circle up with family, friends and fellow fans to watch every big game. 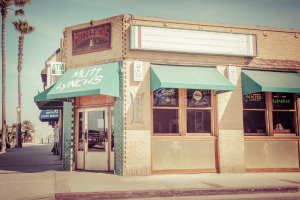 As you ride, walk or jog that boardwalk on a Sunday afternoon, you’ll find Mutt Lynch’s is packed with some of the most intense sports fans. It’s so popular and well known that there is often a line out the door. Known for their schooners of beer, Mutt Lynch’s offers that perfect atmosphere for sipping while watching the favorite NFL teams compete. Although the crowd has gradually become more diverse, the majority of fans you’ll find to be dedicated to the San Diego Chargers. After each Chargers touchdown, the San Diego Super Chargers fight song is blaring with many fans singing it proudly word for word. Their long list of options for breakfast, lunch and dinner make this bar an all day fan favorite. 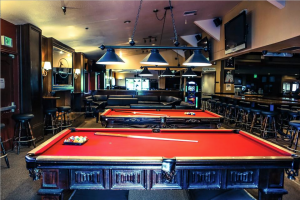 The Classic Q is a bar that is not located on the Balboa Peninsula, but should definitely not be forgotten when it comes to noteworthy sports bars. This bar is located in the Airport District and is a popular meeting spot for friends, coworkers and Green Bay Packers fans in the area. It’s known for hosting large numbers of Packer fans, but is a fantastic choice for all sports fanatic. They carry all of the major sports packages throughout the year – you’ll be impressed with this bars energy and impressive hospitality. Since 1991, The Classic Q, also known to many regulars as the ”Q”, is very well known for their real-time access to all of the most intense and entertaining NFL games. With 50 high definition flat screen TV’s, there’s not a bad seat in the house.

A few more worthy contenders for NFL viewing, open to all jerseys and without any designated team following, are American Junkie, Newport Beach Brewing Company, Rudy’s, The Alley and The Place. With views of the Harbor and fifteen big screens, and great happy hour specials, American Junkie offers the perfect scene for enjoying all of the most anticipated games. Newport Beach Brewing Company is a small local brewery that can compete with the best of them. Their patio seating not only provides a great location for viewing the game, but it also a front row seat to people watching on game days. Rudy’s has game day drink specials that are difficult to pass up. That paired with the abundance of TV’s attracts all kinds of fans to this central sports bar. On game days, Rudy’s serves up $5 Salty Dogs and $5 Screwdrivers. For Monday night football games, they offer $4 import drafts, $3 domestics, and $3 well drinks and $6 appetizers. And the ultimate – $24 Prime Top Sirloin Steak with a fully loaded baked potato, house salad, and unlimited domestic beer. The Alley Restaurant and Bar is a local favorite. The Alley is has impressive food options and great drink specials. It’s a quainter option for focused football fans. The Place is a hidden gem in Corona del Mar. It’s a very authentic sports bar with a large following. It’s a great spot for casual food, a few pitchers and an intense game.

Whether you’re a fan who’s welcoming back the Rams or just a fan of all things football, there’s a place for you here in Newport Beach. Spend your Sunday or Monday at one of the notable sports bars mentioned above or check out a full list of all restaurant options here. Best of luck with those football brackets!