Mimosas may be the libation most synonymous with Newport Beach. Made with citrus juice and either champagne or sparkling wine, the drink delivers sophistication with a relaxed edge, a taste of the good life that doesn’t require the extension of pinkies when the other fingers are wrapped around the glassware’s stem. This mirrors the Newport Beach lifestyle remarkably well. After all, the city’s residents typically prefer to celebrate manners of elegance in sun dresses and Hawaiian shirts. Not that they can be blamed – who wants to be near the Pacific Ocean in formal or business attire?

If there’s one thing better than enjoying a mimosa in Newport Beach, it’s enjoying unlimited mimosas at brunch in Newport Beach. Several of the city’s restaurants agree, as the following list demonstrates. You can revel in the delight of brunch-time bottomless mimosas at a wide range of Newport Beach venues, from sophisticated spots along Newport Back Bay to lively peninsula sports bars. You’re going to have a good time regardless of where you go, because you simply can’t be down when you have a mimosa nearby ready to lift your spirits.

The Alley
You’d hope that a place that celebrates the joys of libations would do the bottomless mimosa thing. Your hopes, in this case, aren’t empty ones. This famously fun southwestern Newport Beach neighborhood staple does indeed serve up endless mimosas during their weekend brunch sessions, along with several unfussy items like breakfast burritos and benedicts. This particular blend of approachable food and drink exudes a level of comfort befitting of a place that carries absolutely zero pretense. It practically makes it acceptable to show up in pajamas (don’t do this, however – there are socially acceptable limits to Newport Beach causal wear).

Back Bay Bistro
Newport Beach is loaded with waterfront dining, with most of these places are found along Mariner’s Mile or off the Peninsula. This venue is unique; as its name implies, it’s situated on Newport’s majestic Back Bay, and takes advantage of this position by offering a stunning view of the eco-centric waterway. This panorama provides a scintillating backdrop for a Sunday brunch experience filled with endless mimosas and several attendant stations whipping up everything from omelets to made-to-order pasta dishes. If you’re coming with kids, they’ll enjoy the restaurant’s white and milk chocolate fountains as much as you’ll like your libations. 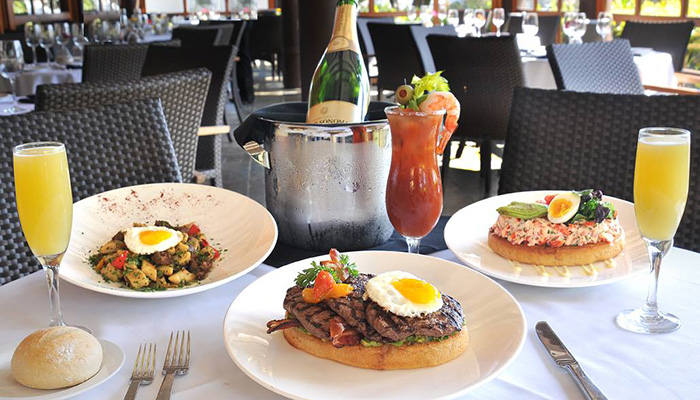 Bayside
Far too often, the “lunch” part of the word “brunch” is overshadowed by the “breakfast” part. It’s understandable – eggs benedict is not something you can readily whip up at home before you head off to work. However, there is something to be said for an experience that pairs bottomless mimosas with a killer brunch item that skews toward the afternoon portion of the affair. This spot just north of Balboa Island is an outstanding option to capture this phenomenal experience. Here, you can pair your mimosas with items like smoked prosciutto fusilli pasta, tiger prawns with green risotto, and other similarly upscale luncheon fare. It won’t change the way you view brunch, but it could very well expand your horizons. 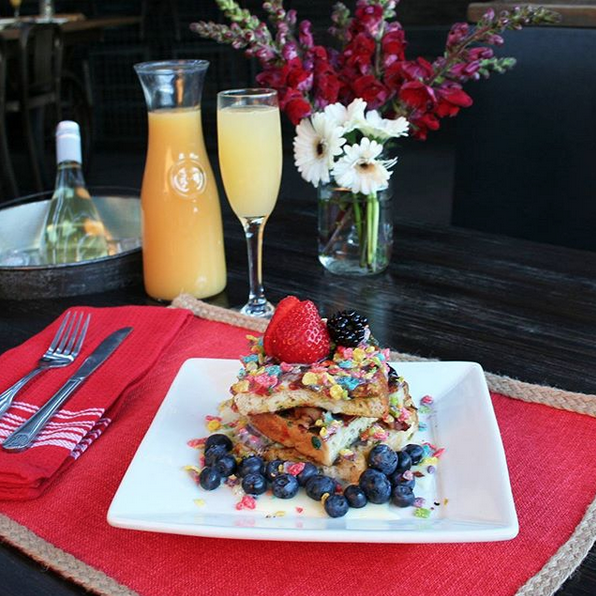 Bosscat Kitchen
When you go to enjoy bottomless mimosas, you may harbor some trepidation that the food takes a back seat to all-you-can-drink shenanigans. This is not the case at this joint, located a couple blocks south of John Wayne Airport. Executive Chef Peter Petro’s brunch menu is anything but rudimentary, unless you somehow think dishes like crawfish queso and eggs with Fritos, short rib chilaquiles, or a sticky bun breakfast burger with duck fat fried egg is somehow commonplace. It’s the bottomless mimosa stop for those that fancy themselves as serious foodies. 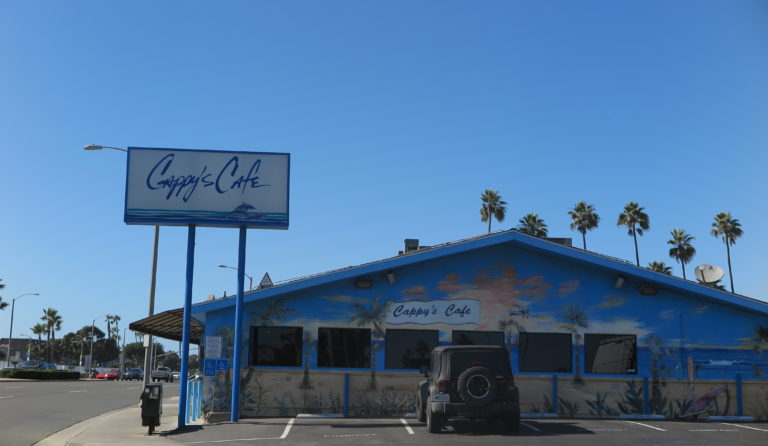 Cappy’s Café
When you’ve been around since 1957, you get to make your own rules. This PCH mainstay cuts their own route in many ways, from being open for dinner just one day a week to serving breakfast whenever they please (which is all the time they’re open, even during their lone weekly dinner). This freewheeling spirit makes enjoying bottomless mimosas as part of their Sunday breakfast even more relaxed than usual, which isn’t a bad thing by any means. You also don’t have to play by your own rules while you’re here, either – feel free to skip the diet one day and dig into something hearty, like their scratch-made corned beef hash & eggs. 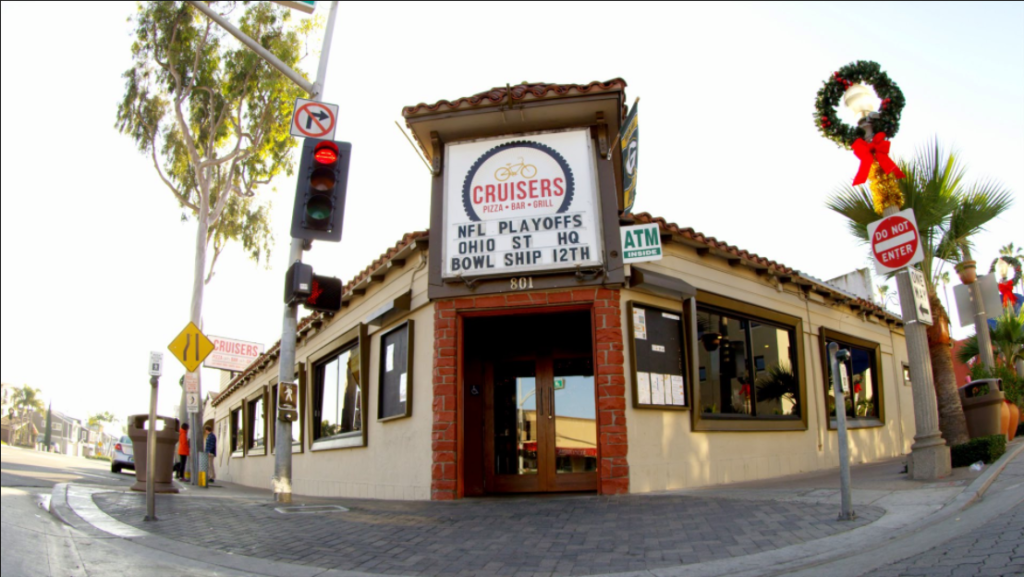 Cruisers Pizza Bar Grill
The Super Bowl has passed (sorry not sorry, Patriots fans), and football season is over. However, watching sports on the weekend is a year-round activity. This Balboa Peninsula joint is an excellent place to do just that while you work your way through endless mimosas at their weekend brunch. You won’t have to worry about finding something good to eat, as you can pair your bottomless mimosas with an approachable brunch item like a breakfast sandwich or an acai bowl. The 20 televisions they have on site means you probably won’t have to worry about finding something good to watch when you arrive. If you’re lucky, the game you end up watching will be just as satisfying as your food and perpetual drink.

Newport Landing Restaurant
There’s something magical about a proper brunch buffet. In an all-you-can-eat setting, the conceptual hybrid of breakfast and lunch explodes into a massive array of choice from both mealtimes. While bottomless mimosas anchor the brunch buffet at this longtime Balboa Peninsula favorite, the level of food choices offered is staggering. It’s possible to enjoy steamed black mussels, French toast, poke, biscuits and gravy, shrimp ceviche, an omelet, and a beef enchilada in one setting. It’s a good thing breakfast and brunch is combined here – you’ll be satisfied until dinner.

The Village Inn
The artificially constructed hunk of land known as Balboa Island is literally a custom-made slice of Newport Beach. It’s also custom-made for cherished communal times amongst its residents and frequent visitors. This venue has been welcoming the community since 1933 and is showing no signs of stopping any time soon. On weekends, locals gather here to enjoy bottomless mimosas and sumptuous brunch fare like huevos rancheros and traditional lox and bagels. Don’t worry if you’re not a local, though – the venue’s cozy dining space and welcoming vibe will make you feel like you belong. 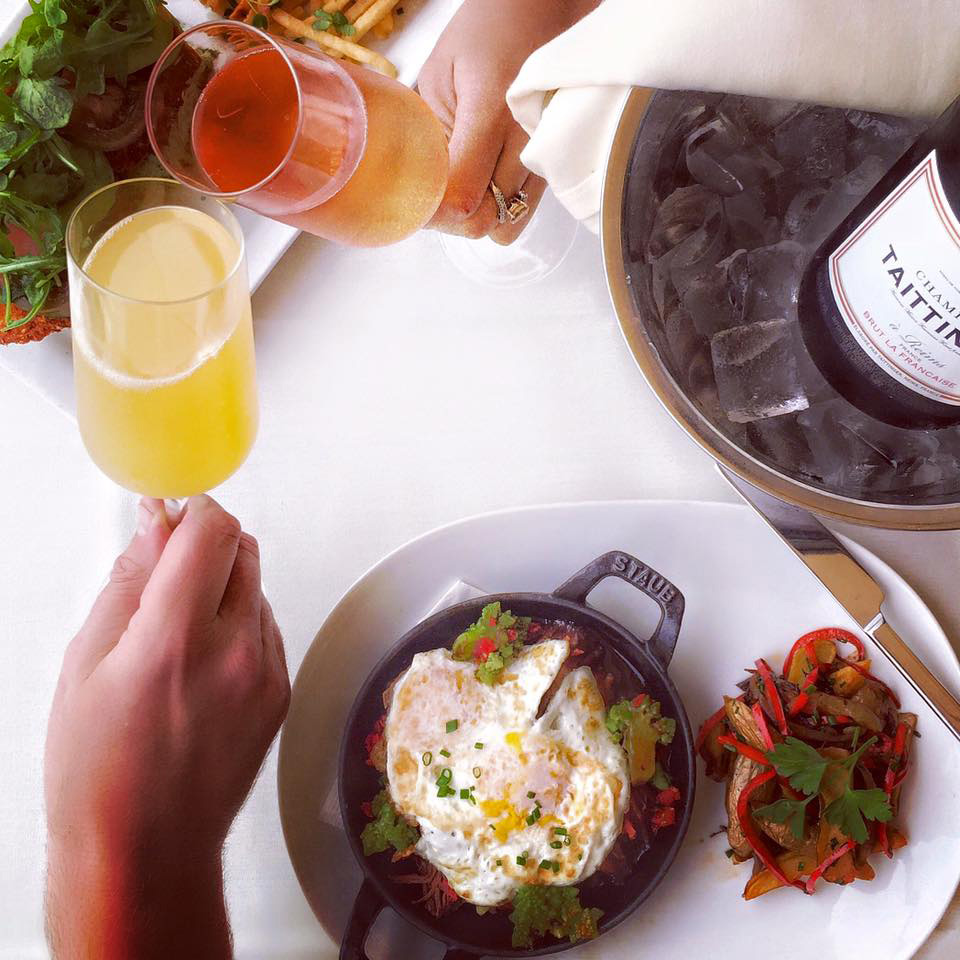 The Winery Restaurant & Bar
Adding a backdrop of boats cutting through sparkling waters is a sure-fire way to make your brunch experience elegant. This is one of the reasons that makes a Sunday soiree at this Mariner’s Mile venue so essential. Its massive floor-to-ceiling windows provides a breathtaking view of Newport’s luxury seafaring action, which hums along at full speed whenever the sun is shining. The other reason to stop here is because their unlimited mimosas pair rather well with elevated culinary delights like almond croissant crème brule French toast or Zinfandel-braised beef shortrib hash and fried eggs.