Newport Beach is sprinkled with venues that have thoroughly explored the culinary possibilities of these fried dough concoctions. While the following examples provide decidedly different takes than the ones found at the neighborhood doughnut shop, the delicious essence that makes a donut so magical remains front and center, with or without a hole. 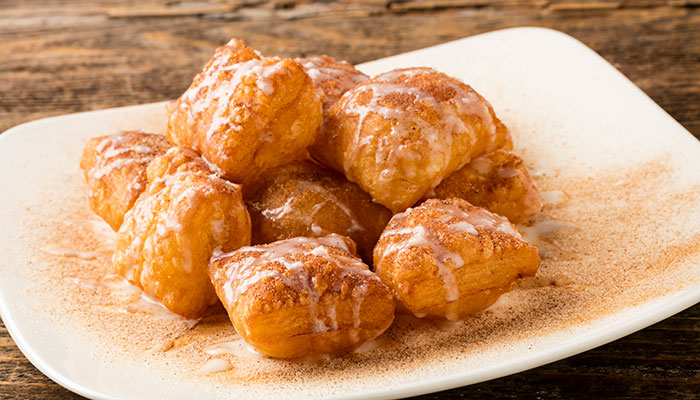 Lighthouse Bayview Cafe – Cinnamon Sugar Beignets
When is a doughnut not a doughnut? When it’s a beignet, that’s when. Sure, some purists may balk at the notion of classifying the classic French fried dough fritter as a doughnut, but they may have yet to start their day with the Cinnamon Sugar Beignets at Lighthouse Bayview Café. Served piping hot for breakfast at this waterfront Balboa Peninsula property, they are generously dusted with slightly spicy sweetness and come accompanied with cream cheese icing for extra indulgence. Deliciously addictive, the venue’s panoramic view of Newport Harbor only makes these beignets even more delightful.

Bosscat Kitchen & Libations – Donut Burger
The donut burger, a purely American marriage of beef and sugar, was first spotted in the mid-2000s and has continued to capture the imagination of chefs and fans of the elastic waistband ever since. Bosscat, the industrial chic restaurant in the Airport district that marries comfort food with contemporary flavors, has created a Donut Burger exceedingly more indulgent than the original version. How is that even possible you ask? The answer is layers, of course. A duck fat-fried egg is nestled between two beef patties along with American cheese and bacon which are then cradled betwixt the donut halves. It would probably be wise to grab some extra napkins. 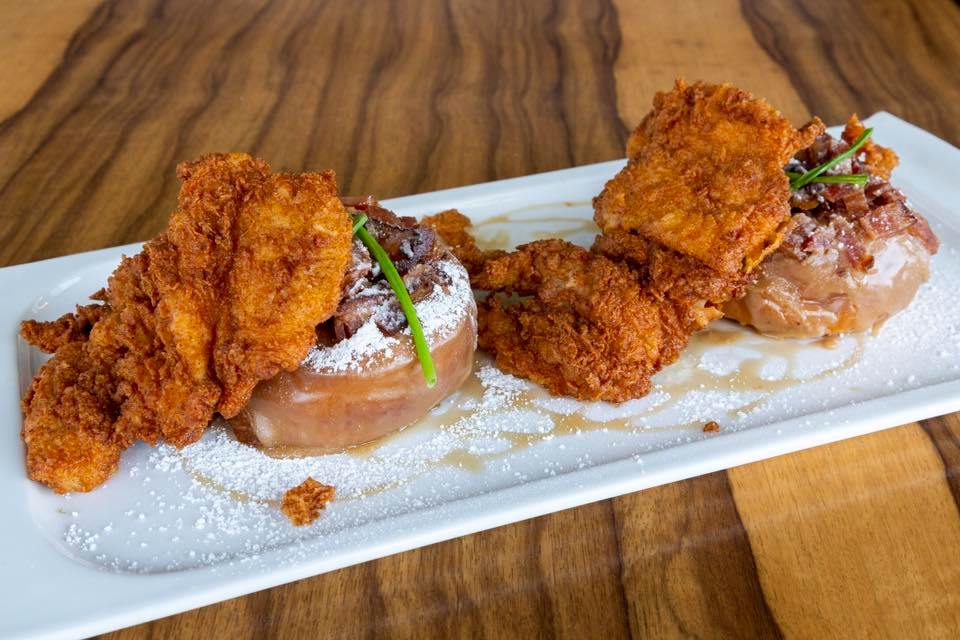 Great Maple – Fried Chicken and Doughnuts
A whole lot of places do chicken and waffles these days. Fried chicken and donuts, on the other hand, is still a rarified treat. Great Maple, the buzz-y Fashion Island restaurant with a spacious patio, serves up an inspired Fried Chicken and Doughnuts plate for breakfast every day of the week. There’s much more to this dish than its straightforward name may lead you to believe, too. The doughnuts are of the maple bacon variety, and their smoky sweetness pairs ridiculously well with its buttermilk fried chicken co-star – not to mention the accompanying maple syrup. You may walk away with a new appreciation for the “southern” in Southern California.

Provenance – Lemon Ricotta Poppy Seed Donuts
You may not think the words “artisan” and “donut” can exist in the same sentence, but you’d be wrong. In the right hands, donuts can indeed be elevated into near-works of culinary art. Case in point: The Warm Lemon Ricotta Poppy Seed Donuts whipped up during brunch at Provenance, the charming Eastbluff Village restaurant. Like the other acclaimed dishes at this produce-driven destination, fresh flavors take center stage. Liberally stuffed with lemon curd, the donuts tantalize with a complex combination of tart and sweet. A donut…evolved.