See what our Firefighters Cook up at the Station

We have all seen them, from time to time, a team of firemen parade into the supermarket to pick up groceries, and I started to wonder—who exactly does the cooking and how do they manage this between calls that can come at moment’s notice? So, I set out to uncover the inside scoop on just how all this happens, and what I found out just might surprise you! Unless you have a family member that is a fire fighter, this all may be new. Personally, I found it fascinating, and hope you will enjoy this blog as we explore just what is cooking at our Newport Beach Fire Stations.

First, I must say, a big thank you goes out to our Fire Chief, Scott Poster, Battalion Chief Ralph Restadius (who was on duty the day I was conducting interviews), and the Captains at each Fire Station for approving my visits. This includes: Captain Ron Guttierez at Fire Station No. 3, Captain Glenn White at Station No. 4, and Captain Jim Boland at Fire Station No. 5. Thank you for being so welcoming and allowing me to visit with your stellar teams (in between calls, of course). At Fire Station No. 5, for example, I had to wait outside twice, as they took calls requesting Paramedics.

So, the first question on this assignment, was “How am I going to find out who the good cooks are at the Fire Stations? I don’t know any firemen?” But as luck would have it, the very next day, I was enjoying lunch at Bluewater Grill and in walks 5 firemen from the Lido Fire Station, responding to a call (which turned out to be a false fire alarm). I figured this was my chance, and I popped outside to inquire who the best cooks were in Newport Beach? They gave me three names and I was off and running.

To better understand how the cooking is actually executed at a Fire Station, it might be helpful to know a few fun facts that I learned on my various interviews. Fun “Factoids” that you may not have otherwise known…

Meet John Testa- Engineer with Station No. 4 on Balboa Island
John is part of a three person shift. As might be expected, this is one of the smaller fire stations, but does house an antique Fire Truck from the early 1900s which is a special treat to see. John, Lloyd Ellis and Captain Glenn White were there to greet me, and helped educate me on “life at a fire station”. Hershey’s Market, just across the street, this is often their grocery store of choice.

Years ago John worked at the Chart House so he got some of his culinary legs there. Some of the favorites he enjoys making is: Huevos Rancheros for brunch (making his sauce from scratch I might add), Taco Salad for lunch, and for dinner a Pork Tenderloin with Hominy Stew. Spinach Salad is another go-to meal for John with crumbled bacon, zucchini, avocado, and grilled chicken on a bed of spinach. John enjoys grilling all kinds of meats and roasting vegetables on the BBQ. The outside second-story deck offers great views of the charming town below, and there is also a small balcony. On the island, Village Inn, Ciao for Italian, and Wilma’s offer good food quickly, and Hershey’s Market makes excellent sandwiches. The firemen’s favorite is The Captain sandwich (Boar’s Head turkey, pepper jack, bacon, lettuce, tomato, avocado & chipotle mayo on squaw bread). Lloyd is a big fan of the fairly new Sessions Sandwiches on the Peninsula. The Sloppy Barney (pulled pork) and the Private Coast (albacore tuna) are his two favorites.

When going out for a special Fire Department celebration, the firemen are all smiles for Bear Flag in Crystal Cove. Their Taco Tuesday is quite popular. When guests come in from out of town, Beachcomber Café and Javier’s are the “go to” spots, also in Crystal Cove.

John was kind enough to provide us with his recipe for Pork Tenderloin with Hominy Stew (please see this at the end of the article). In this photo below, he made Sweet and Sour Pork on Rice, and Fireman Ed Wick is certainly enjoying that. 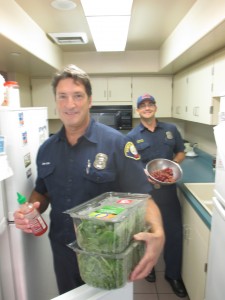 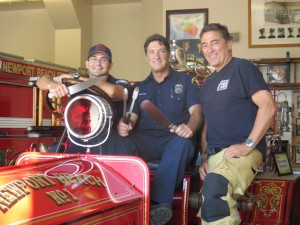 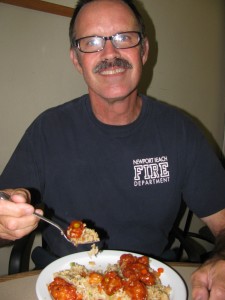 Meet Firefighter Mark Garman With Station No. 3 at Fashion Island
This is a larger fire station with 10 on duty at any given time. Mark is the “Chef In Residence” here, and creates very healthy and flavorful meals for his crew. They have a nice patio just off the kitchen for convenient barbequing which they do often. Mark can often be found out here grilling vegetables, chicken and fish. He also uses a Traeger Smoker and enhances the flavor with wooden chips. One of his favorites is to prepare shredded pulled pork in the smoker, and then add cold slaw and an optional bun or greens without a bun. When in the mood for fries they will often do a healthier version using sweet potatoes. He substitutes pasta for faro and quinoa and has created a special dressing for salads, made with mashed avocados, soy sauce, water, stevia, ginger and green onions. Some nights they will cook chicken and they call that meal “Kitty Chicken” because that is typically lower cost and they are able to save some of the funds collected for a bigger celebration during the month.

When not in the fire station, they enjoy Bear Flag on the peninsula (also in Crystal Cove), and Panini Café on PCH. They love Wild Strawberry Café (around the corner from the theatre), Eat Chow, Gary’s Deli in Corona Del Mar, Great Mex, Pirozzi’s, Jersey Mike’s, Roses Café (for breakfast burritos) and C’est Bon for bread. They tend to shop at the Ralphs Market in East Bluff, and at times the Albertson’s in Corona del Mar. The best salad bars are found at Whole Foods and Irvine Ranch Market.

Sunday brunch is a fun meal for Mark and the crew—- as he enjoys setting up a killer buffet. This includes: orange juices, Eggs Benedict, Denver omelet, Egg whites with spinach, basil and tomatoes, tater tots, sweet potatoes, and so on.

Everyone lights up when they pull out the Viking helmets (yes adorned with two huge plastic horns on both sides). The Viking Dinner is a feast in the station and is often done for a special going away party or birthday celebration. The party is much anticipated, and they go all out planning this event. There are smoked ribs, scallops, chicken, grilled vegetables, potatoes, and so forth. They cover the entire table with saran wrap— from bow to stern— and believe it or not, place all the food in the middle and they all eat with their hands. What fun. Can’t you just picture this scene? And yes they are wearing their Viking helmets! They have a great sense of comradery and this is just one example of what they do together and around food.

Mark has shared with us his Mom’s Turkey Meatloaf recipe which he uses at the station. Thank you Mark! (The recipe can be found at the end of this article.) 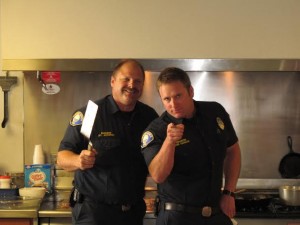 Firefighter Mark Garman “on the grill” 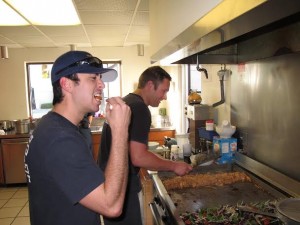 Meet Jason Leftige- Paramedic with Station No. 5 in Corona Del Mar
Jason is a true Gourmand and I expect to see his names in lights some day. Many years ago he did work as a Chef in restaurants you would all recognize, such as The Cheesecake Factory and Maggiano’s. That is where he learned his craft. His father was a fireman, so he learned early on that cooking was important and a test of rookies in the field. He passed those tests with flying colors.

Jason Leftige (or “Chefie Lefty” as they have nicknamed him), takes great pride in his cooking and likes to create dishes that his Team will really enjoy, and that are healthy as well. Fire Station No. 5 is part of a 5 person crew, so on any given day there are five to feed. Jason started ten years ago making tuna melts and pasta salads. He has progressed to full-blown elegant dinners. His plates look like something you would find at fine dining restaurant here in town. For the main course, he often cooks fish and chicken, and tried to do fish in unique ways—such as fish tacos and fish piccata. He roasts vegetables on the grill, and tried to elevate each meal with condiments such as capers and homemade dressings.

Jason has shared with us one of his own recipes, which sounds delicious. It is Italian Sausage and Gratin Butter Stuffed Portabella Mushrooms. Thank you for sharing this with all of us! 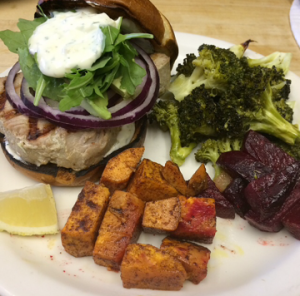 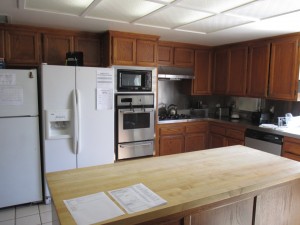 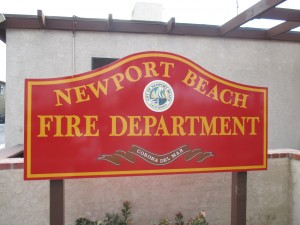 CLICK HERE for a Favorite Recipe From Each of our Featured Firefighters & Paramedics!