“That is a tasty burger!”

If you’re a fan of Quentin Tarantino’s critically acclaimed 1994 film Pulp Fiction, this line may sound familiar. If you’re the kind of film buff that memorized half of the film’s dialogue – and there’s plenty of you out there – you’ve probably said this line after sinking your teeth into a juicy patty stuffed between two buns. You may have even uttered it via a horrible Samuel L. Jackson impression, since his character Jules Winfield is the one that says the line. It’s cool if you did. A whole bunch of other people did, too.

Nearly 25 years after the line was committed to celluloid, it’s still cool to say. Why? Because there are few culinary pleasures in life better than the first bite of a burger that’s truly tasty. The blend of a charred, juicy protein and the dainty bun create a simple yet decadent dance of taste bud enthrallment on their own. Merge that duo with the gooey drip of melted cheese and other toppings and you get a supergroup of flavors worthy of thesaurus-sourced praise. Yet a properly prepared burger doesn’t need over-the top superlatives to justify its existence. Just calling it “tasty” will do just fine.

In Newport Beach, there are plenty of places to get a tasty burger. Despite a burger’s simplistic, sandwich-like design, it leaves plenty of room for variance. The following burgers demonstrate this rather well, making it very easy to justify trying them all. 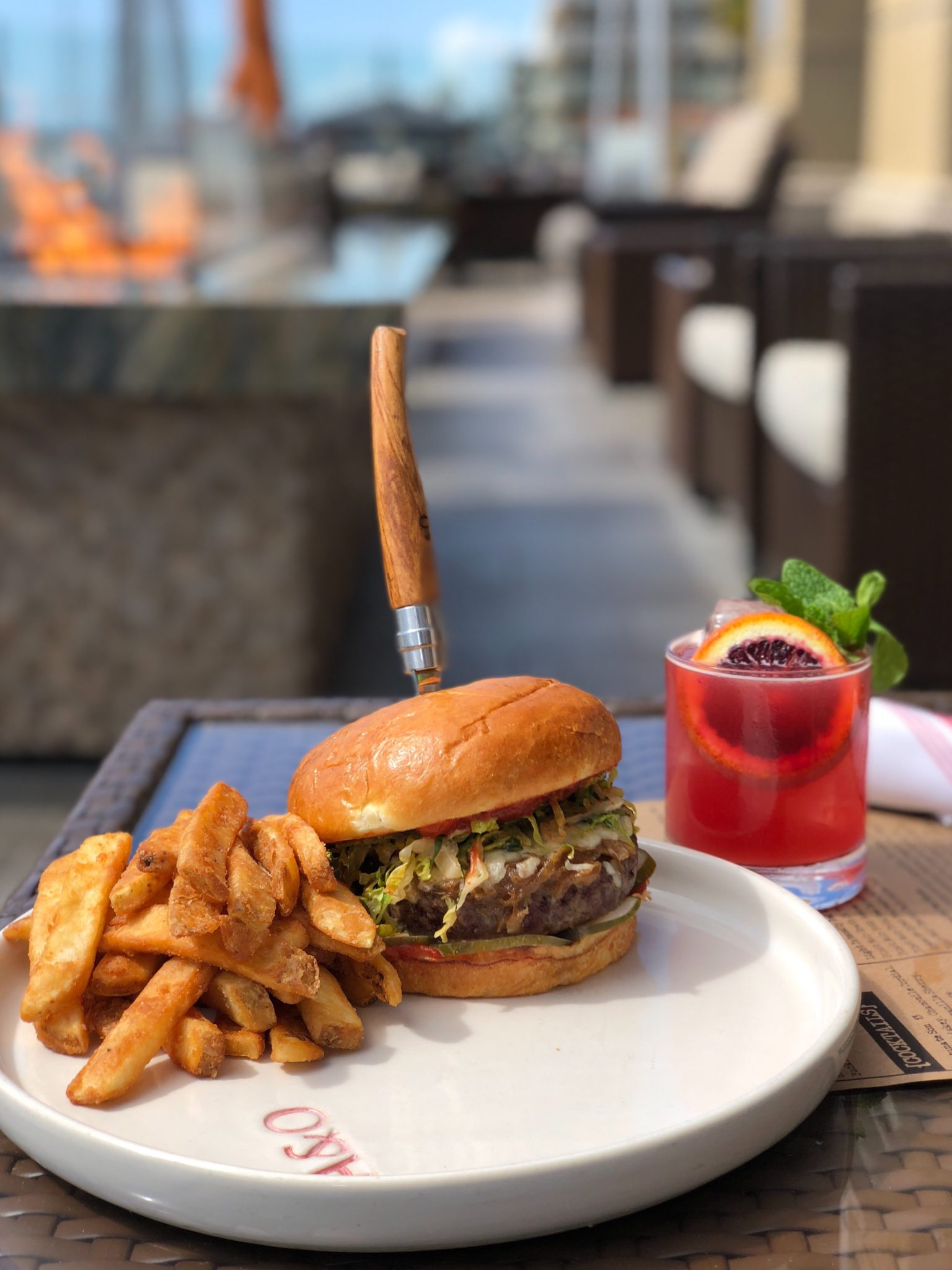 A & O Kitchen + Bar – When you think of waterfront dining, it’s only natural to think of dining on either seafood or elegant dishes. Both culinary routes complement the view; the former by environmental association, the latter by refined beauty. Yet it’s perfectly fine to allow a burger to subvert this trope. The Classic Kobe Cheeseburger created by the Balboa Bay Resort gastropub indeed upends the expected, but does so without sacrificing a smidgen of indulgence. As the name suggests, the burger’s star is a Kobe beef patty, and it’s joined between a brioche bun by caramelized onions, Vermont white cheddar cheese, and 1000 island-tossed shredded romaine lettuce. It’s a burger that would be highly enjoyable anywhere. The fact that you can, in fact, enjoy it by the water makes it extra special. 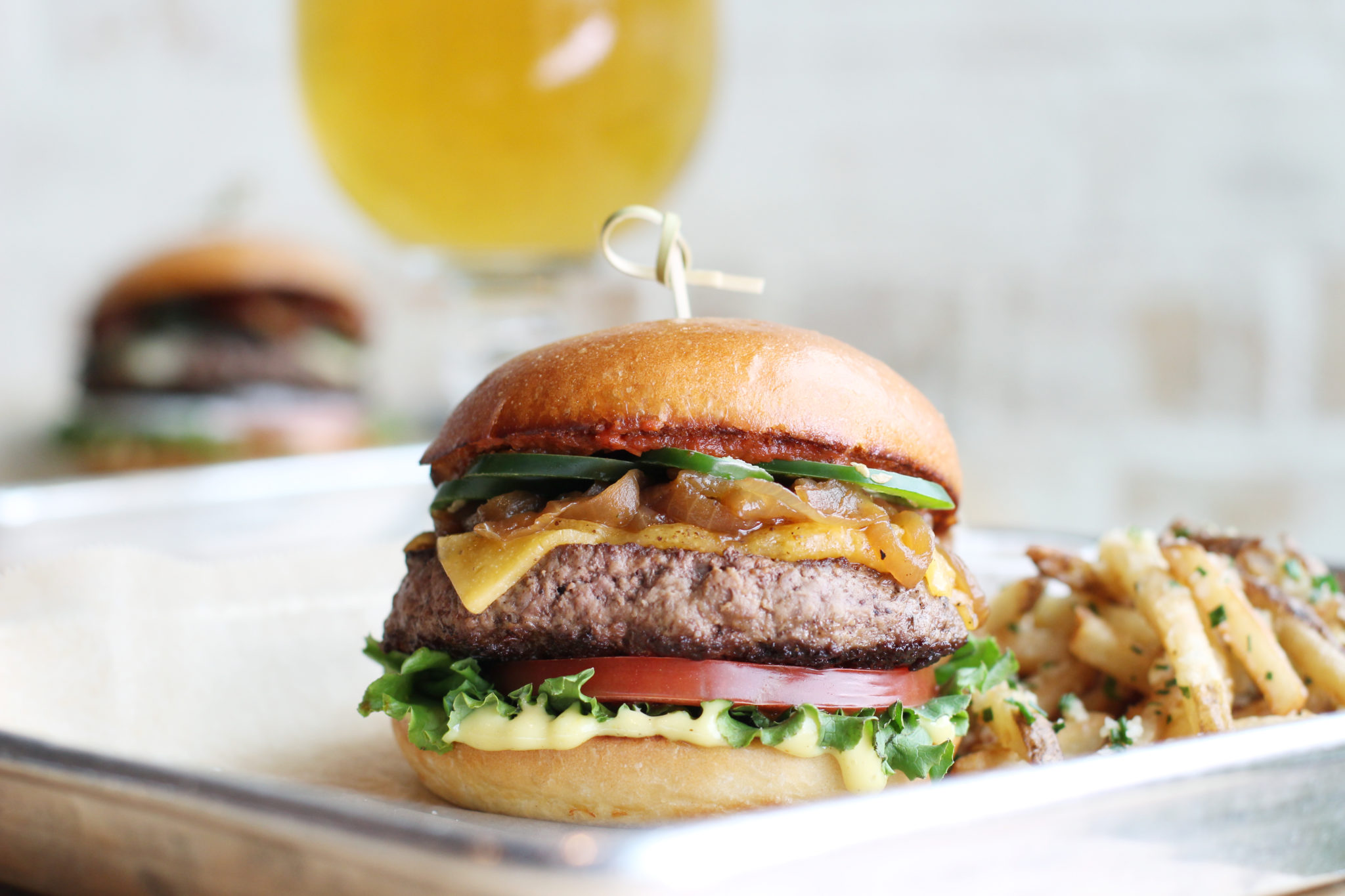 Hopdoddy Burger Bar – It’s one thing to find a good burger. It’s another thing entirely to discover a burger that does good. That’s precisely what’s going on when you order the Good Night/Good Cause burger at Fashion Island’s popular Austin-import burger joint. The burger itself is transcendent, as it features Angus beef, Tillamook cheddar, caramelized onions, jalapenos, and two delightful wild cards dubbed Caffeinated BBQ and Sassy Sauce. Yet its best feature isn’t part of the burger at all. Rather, it’s the $1 donation to a local charitable organization that occurs with every order. Even if the burger’s decadent flavors make you feel guilty, its ingenious form of generosity will absolve you of such vibes. 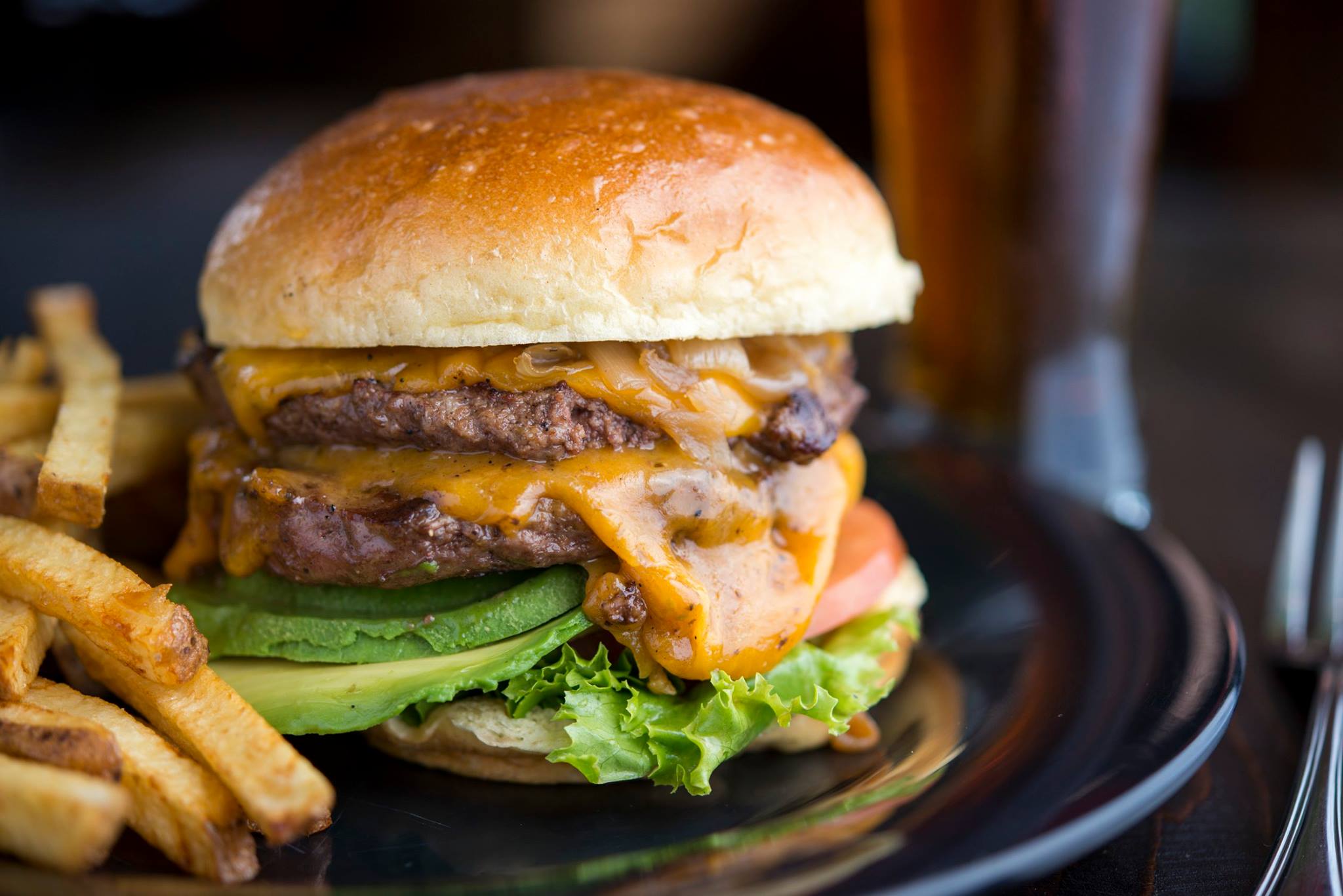 The Krave Kobe Burger – A quick lesson in beefy semantics: Kobe beef comes from the Japanese prefecture of Hyogo, where Kobe serves at its capital city. Any beef produced in the Kobe-style outside of Kobe is known as wagyu. This Newport Coast outpost clarifies things further, referring to their beef as “American Kobe Wagyu Beef.” Two patties of this specifically branded goodness anchors the eatery’s Kolossal Wagyu Burger and it’s accompanied by green leaf lettuce, caramelized onions, tomato, and garlic aioli. One bite into this massive beast and you won’t think twice about what the beef is called. You’ll just call it crave-worthy. 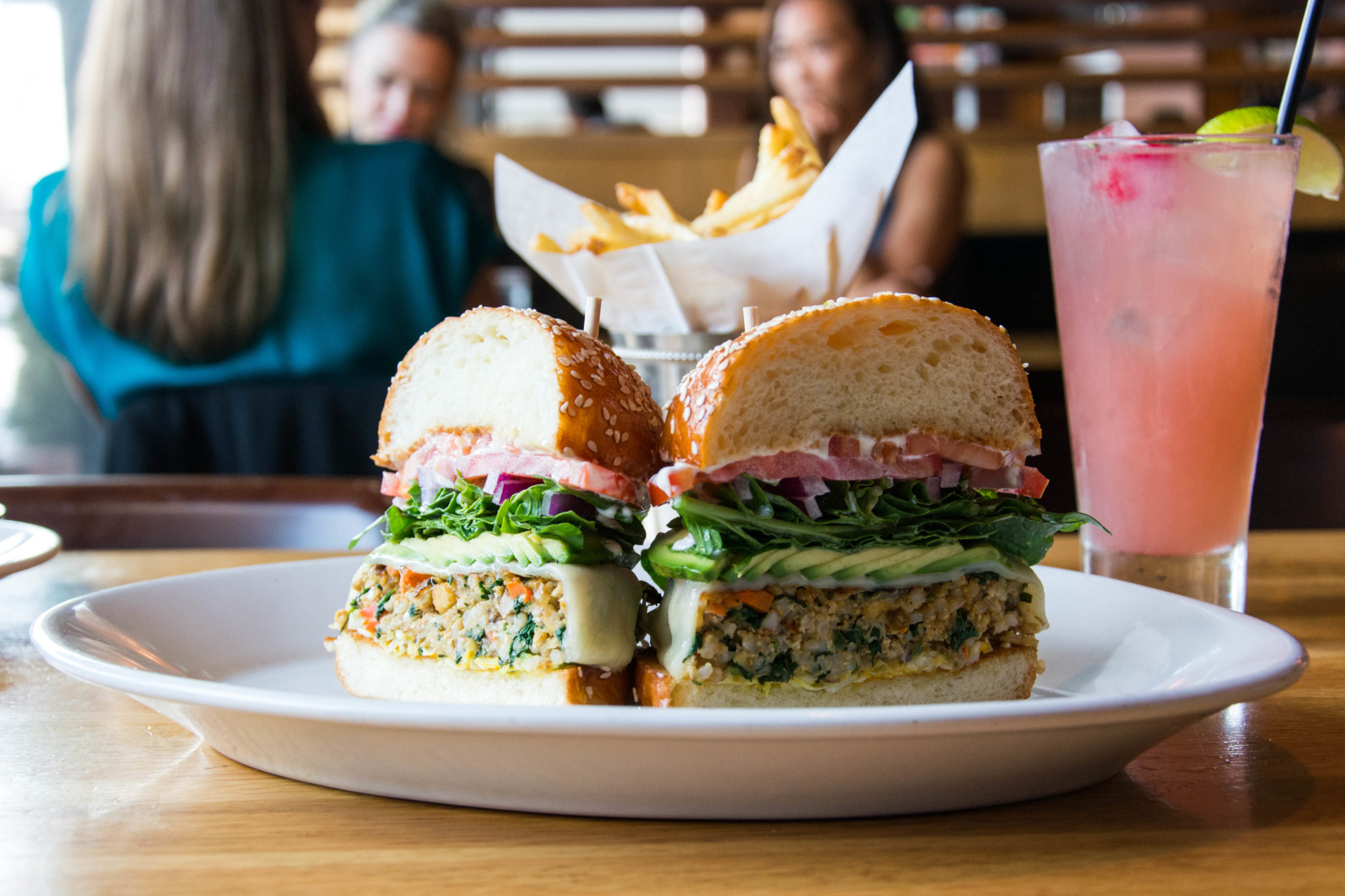 R+D Kitchen – Carnivores shouldn’t have all the fun when it comes to eating burgers. A proper veggie burger can provide more than sufficient tastiness to a person’s palate. When they’re done right, it possesses the power to make even the hardest of hardcore meat-eaters happily wolf it down without thinking twice. The Veggie Burger whipped up by this Fashion Island venue passes this particular test in rather spectacular fashion. There is no denying the burger is vegetarian-friendly – its melted jack cheese-topped patty consists of brown rice, mushrooms, and almonds. There’s also no denying it’s delicious, even if you typically prefer your patties to be in meat form. 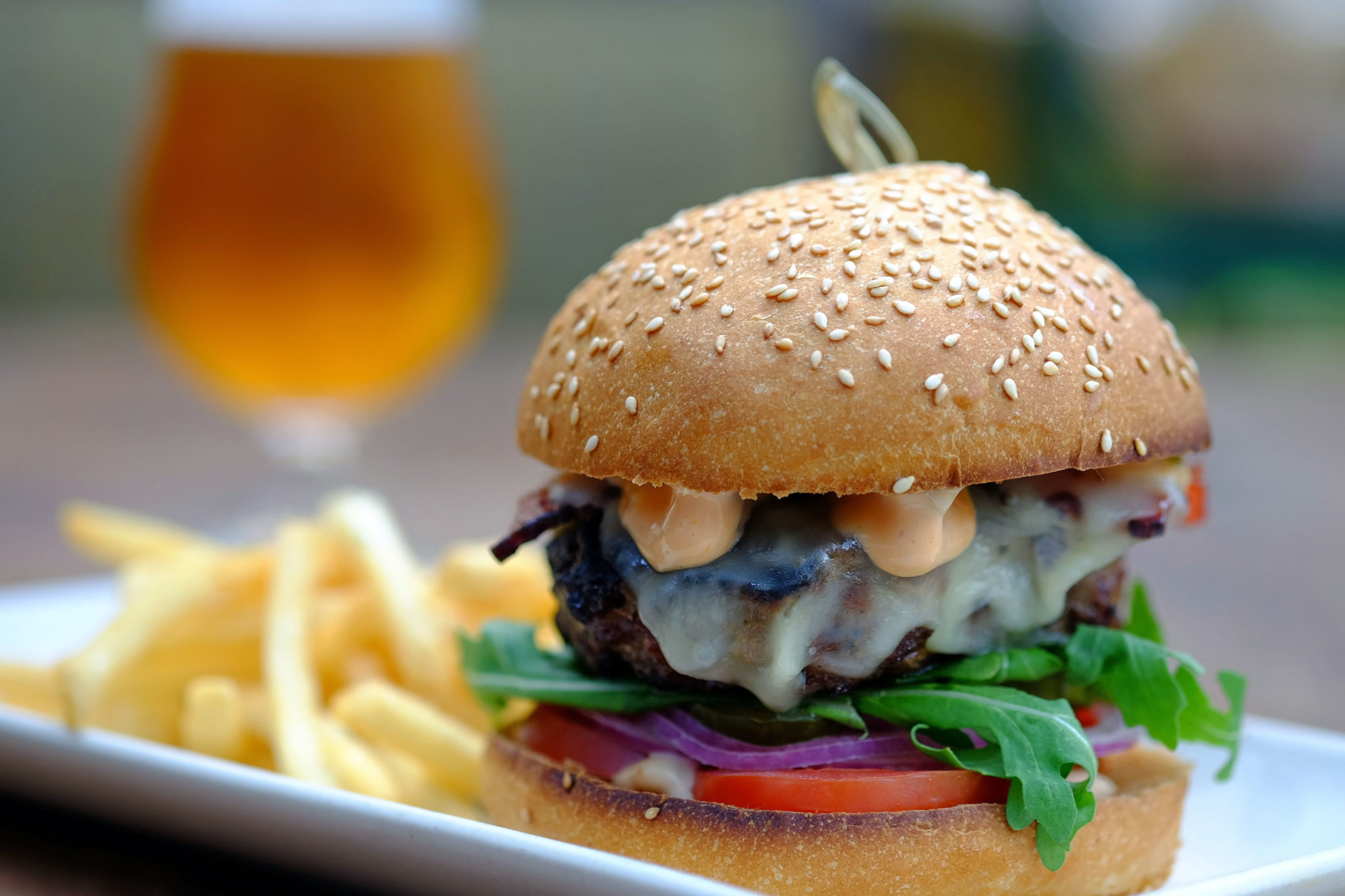 SideDoor – If there’s one thing that pairs better with a burger than French fries, it’s beer. This is especially true if the accompanying brew is something better than a basic bottle fit for the average convenience store. When you’re ready to enjoy this kind of magic in action, simply stop by this Corona Del Mar gastropub, select a pint of craft beer on draught, and order the SideDoor Burger. You’ll be rewarded with a juicy burger topped with white cheddar, red onion, bacon, and Russian dressing and stuffed between a sesame seed bun. Don’t stress too much about the perfect beer pairing. At the end of the day, you’re having a beer and a burger. You win. 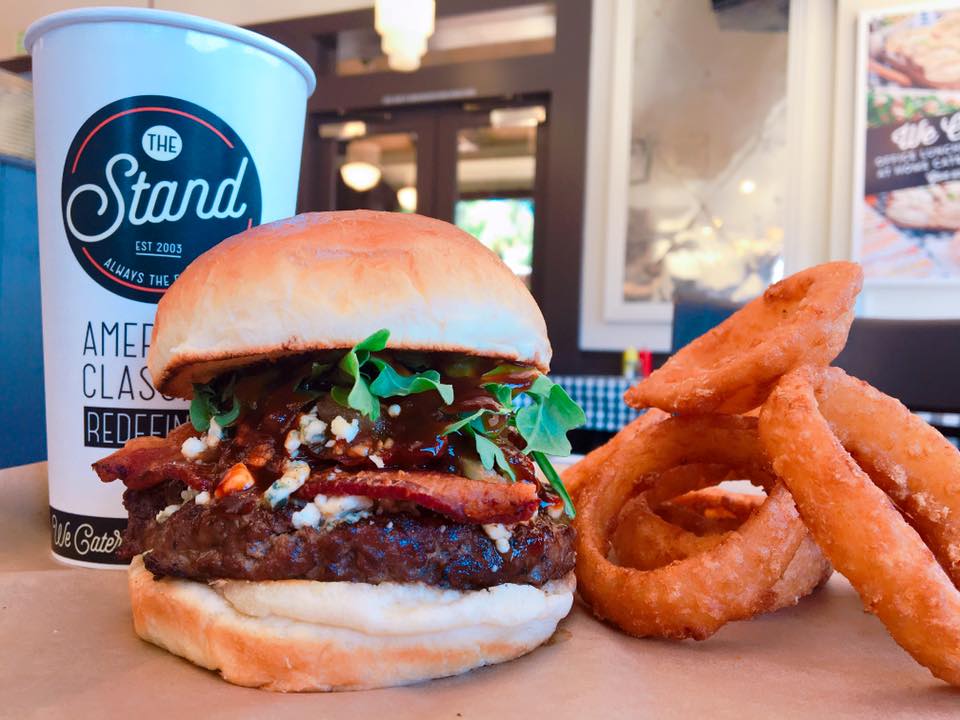 The Stand – Sometimes, the right combination of toppings can make an already delectable burger even more divine. This doesn’t mean you have to throw seventeen eclectic things on top of a perfectly cooked patty. Just a few balanced augmentations can do the trick. This Back Bay eatery proves this axiom through its Big Blue burger. Blue cheese, grilled onions, bacon, roasted tomato, arugula, and bbq sauce top this burger’s patty, resulting in a sandwich that’s equal parts earthy, zippy, peppery, smoky, and slightly sweet. It’s a burger that’s not merely made. It’s composed. On the other hand… 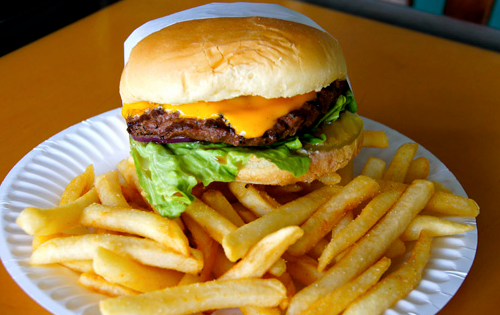 TK Burgers – …there are times when you simply need a straight-up, old-fashioned, no-nonsense cheeseburger to get you through the day. Enter the Cheeseburger created by this Balboa Peninsula fixture. It’s simply a char-broiled patty topped with secret sauce, pickles, onions, tomato, lettuce, special seasoning, and a thick slice of American cheese. There’s nothing remotely fancy about it, yet that’s what makes it so wonderful. It’s precisely the kind of burger you want to carry with you when you stroll along the Balboa boardwalk on your way to the beach. Of course, it’s so tasty, it may not actually make it down to the beach.