Newport Beach has Several Places that Put the Fun in Fungus

Mushrooms are fungi. That truism alone lends substantial credence to any argument about it being the weirdest food we consume on a regular basis. The argument doesn’t even include the fact that you may die if you start munching on one freshly plucked from a field (don’t do this, by the way).

However, such weirdness comes with a wealth of reward for those that indulge in the safe, picked-by-a-pro variety. The dense earthiness packed into each bite of delicious fungi instantly adds a dimension of flavor complexity virtually unmatched by any other ingredient. This mighty power makes it a tremendous asset to any dish or even all on its own. There are several ways you can discover their singular goodness throughout Newport Beach. Don’t worry – all the mushrooms featured in the dish won’t harm you. However, they may leave you wanting more. 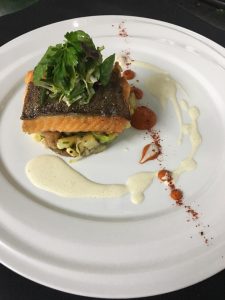 The look of an edible mushroom isn’t just limited to the round-capped, skinny-stemmed version that readily fills your local grocery store’s vegetable aisle. Chanterelles may provide the most definitive, delectable proof of that axiom. These golden-hued, horn-shaped mushrooms possess a nutty, herbaceous flavor with a slight tinge of pepper, making them a perfect match for a wide range of dishes. This is demonstrated rather well in the Crispy Skin Salmon dish prepared by this venerable Mariner’s Mile venue. Executive Chef Jon Blackford pairs the fish with an indulgent chanterelle hash, creating a dynamic duo of ideally balanced flavor. Add some leeks, corn, harissa and Laurel crème into the mix, and you have a killer dish that’s worth its weight in gold.

There are certain main dishes that mushrooms were seemingly made for pairing. Braised short rib is one of these entrees, and their intertwining flavors are so ideally suited for each other, they can be enjoyed in virtually any setting. This is even the case when the hearty duo is served up mere steps from the beach, as the Braised Short Ribs dish prepared by this legendary Crystal Cove establishment demonstrates. Topped with an indulgent red wine sauce and served with a heaping helping of wild mushrooms along with walnut gorgonzola ravioli, it’s the kind of dish that may appear to be an exercise in cognitive dissonance when you glance out at crashing ocean waves. However, it’s so absurdly flavorful, you won’t mind. 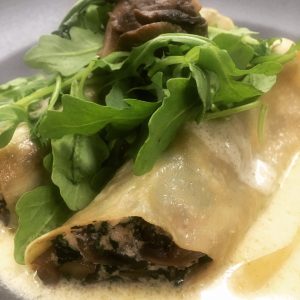 When we think of pasta dish toppings, our main may gravitate to obvious choices like meatballs or a tangy marinara sauce. But mushrooms are a sneaky good addition to any plate of pasta, as they offer a near perfect textural and flavor balance to properly prepped noodles. The wonders of the wondrous pairing is the driving force behind the Mushroom & Spinach Cannelloni dish crafted by this venerable Corona del Mar establishment. Hand-made pasta tubes are generously stuffed with fabulous fungi and fresh ricotta and accompanied by spinach and a rich parmigiano fondue, resulting in a dish that’s so sinfully rich, it feels kind of naughty – but in the best way possible.

Pizza Nova
Of course there’s going to be a pizza on this list. And with good reason, too – the combination of earthy mushrooms, gooey cheese, and rich tomato sauce is pretty terrific, even if you’re not much of a fungus fan. This trio of ingredients can be a stopping point at some pizzerias, but it’s just the beginning for this special Mariner’s Mile pizza joint when they assemble their Portobello and Pancetta Pizza with Black Truffle Oil. The naturally intensified flavors of the famously oversized mushroom are tempered by the smoky flavors and fragrant aromatics of the pie’s other two stars, making each slice consumed taste more like an indulgence rather than a mere treat.

3 Thirty 3
Mushrooms make outstanding burger toppings. Yet a truly pleasurable meat and mushroom inner-bun experience rests in the quality of the beef. The Filet Mignon Sliders put together by this Newport Harbor-adjacent restaurant most certainly nails this all-important aspect. Yes, the duo of sliders is not a classic burger per se, but that’s a moot point. What really counts is the fact that these babies feature fire-grilled beef tenderloin topped with sautéed mushrooms and caramelized onions. We’re guessing you’ll agree with this sentiment after one bite.