Warm Up for Winter with Mac ‘n Cheese in NB

Newport Beach may not have winter the way Chicago does, but the weather does eventually take a cooler turn, with stiff winds picking up along the coastline. When the rain finally sets in, thoughts turn to comfort food, and there’s no more satisfying comfort food than mac ‘n cheese. Chefs throughout Newport Beach have made the classic casserole their own, with not a single blue box or powder packet in sight. 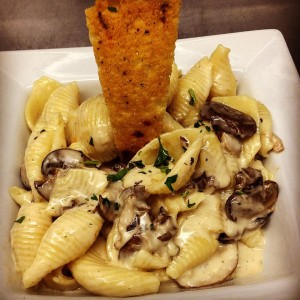 No restaurant celebrates mac ‘n cheese as much as Patty Macs, located just steps from the Balboa Ferry on the peninsula side. There are eleven separate “macs” on their menu, with everything from the classic cheeseburger mac, to buffalo chicken mac, to higher-end fare like lobster mac and truffle mac. During their reggae-themed happy hour on Wednesdays, Jerk Mac and Rasta Mac cost just $6, with a dollar off Red Stripe beers, all perfect to wind down. 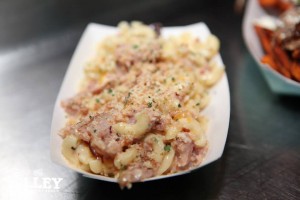 People flock to the Alley, a comfortable, wood-paneled pub on Coast Highway, for its generous happy hours and its easygoing atmosphere. The mac ‘n cheese at the Alley, goosed with bacon and mushrooms, seems to be on half the plates in the restaurant, but it’s a match made in heaven with the bourbon meatloaf served on Thursday nights. 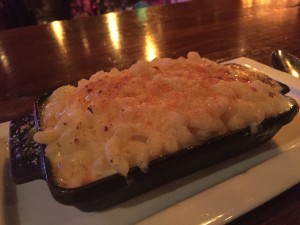 A Restaurant, located right at the beginning of Mariner’s Mile, has become much more ambitious since its original debut as The Arches in 1926. Now one of their red leather booths is the perfect place to hole up on a cold, rainy night. Chef Jonathan Blackford’s mac’ n cheese, made with Hook’s 10-year-old Cheddar cheese, provides a sharp tang not normally found in the dish. 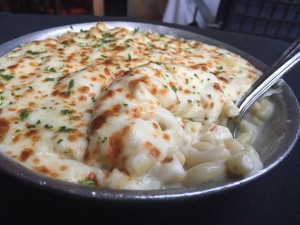 Mastro’s Ocean Club is a jewel of the Crystal Cove Promenade, and their mac ‘n cheese reflects the restaurant’s upscale location. A rich, creamy béchamel is enriched with Gorgonzola cheese, then tossed with al dente pasta, spooned into miniature cast iron skillets, baked, and served still bubbling. Heads turn as this passes, with other diners looking on jealously.

A beloved Newport Beach institution, Eat Chow continues to grow and expand locations throughout Orange County. Their mac ‘n cheese uses penne rather than elbow macaroni, which means that by the time the dish comes to the table, the sauce will have soaked all the way through the center, making each bite burst with cheese. 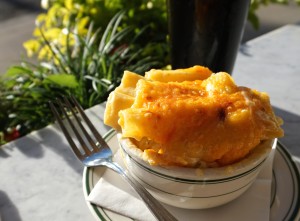 At Corona del Mar’s Summer House, you’ll have to wait for a table, even in winter. Once you’re seated, order their popular mac ‘n cheese. The sauce manages to be both rich and light, and the bowl is topped with Cheddar cheese before being run under the broiler. You can add bacon or grilled chicken to make it more of a meal than an appetizer, but the mac’s great all on its own. 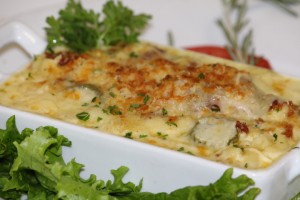 The weather may be cool, but the mac ‘n cheese at the Porch on the Balboa Peninsula is hot, spiked with jalapeños and bacon and baked until the cheese on top bubbles and crisps. Mac ‘n cheese is one of the featured items on the Sunset Specials happy hour menu; order a refreshing drink to cool the heat from the peppers.

What could possibly be more satisfying than a bowl of mac ‘n cheese? How about a mac ‘n cheese pizza? At Pizza del Perro Negro on the Balboa Peninsula, the only U.S. outpost of a popular chain that dots upscale parts of Mexico City, they take homemade mac ‘n cheese and put it onto a thick, hearty pizza dough spread with either tomato sauce or homemade barbecue sauce, then cover it in even more cheese. This pizza is the perfect reward for kids!

At Wildfish Seafood Grille, mac ‘n cheese isn’t just a side dish, it’s a prime side dish. Though the restaurant focuses on lighter fare through its fish preparations, their mac ‘n cheese is an indulgence: a huge portion of gooey, creamy pasta shot through with black truffles whose flavor permeates the whole dish. There’s no truffle oil here! 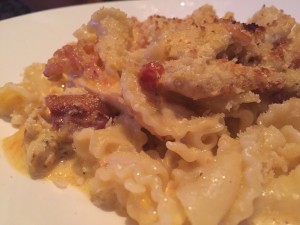 Yard House at Fashion Island is justifiably famous for its impressive selection of beer taps. But what goes well with beer? Mac ‘n cheese, of course. [Mac ‘n Cheese]², or mac ‘n cheese squared, is their signature macaroni and cheese. Chicken, bacon and wild mushrooms dot the bowl, giving the rich dish a special umami flavor. Sounds like another beer is needed! As a holiday bonus, they’ll also have a lobster mac ‘n cheese on the menu.