Beat the Heat with 7 Cool Treats

It would sometimes seem like the only thing that rivals our anticipation of summer is our complaints about the temperature once the season arrives. Though NB temperatures rarely pass 85 degrees, sometimes a good summer heatwave elevates cravings for a cool treat.

Thankfully, Newport Beach has several edible and drinkable ways to help you cut though those extra warm days. From classic treats that have been refreshing residents for generations to indulgent delights served up by relative newcomers, the city is well-equipped to help cool your cravings. 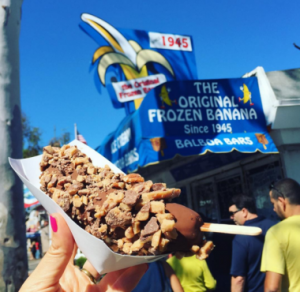 Sugar ‘n’ Spice/Dad’s Donut & Bakery Shop
One of Newport Beach’s most contentious debates over the past half-century has been over who invented the Frozen Banana. Despite claims laid by the fictional Bluth family from the cult Orange County-based TV show “Arrested Development,” the genesis of the fruit-based delight’s OC origin story traces back to one of these Balboa Island landmarks. It all depends on whom you ask. We’re not ones to stir up debate around here, so in the spirit of fairness, we’re going to recommend you get the treat from both of the places. That way, you can say you had an OC original with great confidence. Also, you get two frozen bananas out of the deal.

Pipeline’s North Shore Shave Ice
There are two things you should know about shave ice. First and foremost, there is no “d” to be found in the treat, and you should prepare yourself to be curtly corrected if you call it “shaved ice” in front of a true shave ice aficionado. Secondly, this Hawaiian treat consisting of snow-like ice drenched in flavored syrup, is arguably the best thing you can consume when the thermometer nears triple digits. This Balboa Peninsula joint is a terrific place to put this argument to the test. There are some two dozen flavors served here, but we recommend going with the Passion Fruit Hawaiian Shave Ice option because it’s one of the most traditional tastes on the menu. You can always explore the other flavors when you stop in for a needed return visit. 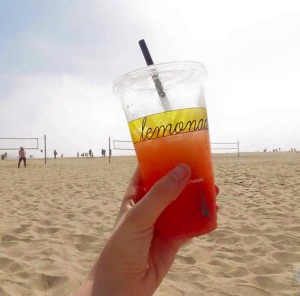 Lemonade
When you name your venue after a childhood summertime staple, as is the case with this Fashion Island restaurant, you’re going to have a few menu items to help put a dent in heat-addled discomfort. But it’s not just that this place offers lemonade; it’s that they offer fun, delicious variants that go well beyond the lemon-dominant norm. Take their terrific Blood Orange Lemonade, for example. All of the tartness you’d expect from a lemonade is present, but it’s enhanced by the unique berry-kissed citric flavor that makes blood oranges so exceptional. Think of it as a kid beverage that grew up. 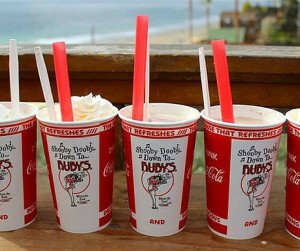 Ruby’s Shake Shack
People howled in protest when the venerable chain restaurant took over Crystal Cove Shake Shack in 2006. Those cries of derision died down considerably once it was made known that the tiny re-branded venue within Crystal Cove State Park would still be making the same Date Shake it slung for decades. Another thing that hasn’t changed here is the spectacular ocean view that you can enjoy whilst plunging your straw into the thick, creamy treat. It’s a physical trait that makes the indulgence even more irresistible. 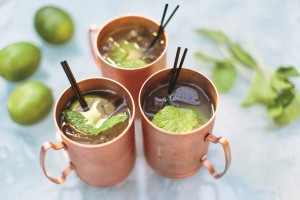 Aqua Lounge
When it comes to dealing with hot weather, it’s sometimes best to not go it alone. During these times strike, you’d be wise to gather a few friends and partake in the Tableside Dutch Mules concocted by Island Hotel Newport Beach’s relentlessly sleek lounge. Made with vodka, ginger beer, and fresh lime juice, these babies are served in a copper mug to help keep the drink consistently cold. They’re also served tableside specifically for groups of 8 to 10, so it’s safe to say the beverage is a conduit for good times. Better yet: the venue opens at 11:00 AM, thus allowing your crew to joyously explore the near-infinite merits of day drinking.

Alta Coffee
A bona fide independent coffeehouse probably doesn’t spring to mind when you’re thinking of ways to beat the heat. But if you look beyond the organic roasted coffees brewed by this Balboa Peninsula icon, you’ll find refreshing beverages like their Lemonade Slush. The abundance of icy shards packed into each cup creates a thickened tart treat that’s dainty despite its voluminous appearance. It’s a delightful concoction that tastes even better when its slowly sucked down within the confines of their homey patio. 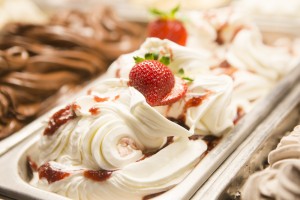 Gelato Paradiso
There’s nothing wrong with having a good ol’ scoop of ice cream to help cool you down. But if you really want to do some temperature-related damage control, you should always consider gelato; ice cream’s thicker, richer cousin. The increased density found in gelatos like the ones served up at this Fashion Island locale create more intense flavors. Hence, when you drop by and order their strawberry sauce-infused vanilla concoction Fragola e Crema, the sweet fruitiness of the treat is bound to be all the more revitalizing. You really can’t ask much more than that from a dairy product on a hot day, can you?