Newport Beach developed into a tourist community towards the late part of 1906, after the commercial shipping industry moved to San Pedro. It became an incorporated city in August of that year. Twenty years later in 1926, Pacific Coast Highway opened up and allowed visitors from Los Angeles to travel with ease to the Newport shores. Soon, restaurants, bars and culinary attractions would open, drawing travelers from California and beyond, to its beautifully sunny climate and sandy shores. Many of the original establishments still stand today with decades of history passing down from generation to generation. Here are ten of those iconic, history-laden places which have remained notable landmarks in Newport Beach.

A Restaurant
In 1925, Coast Highway opened from Huntington Beach to Newport Beach, that same year, construction on The Arches began. Originally built as a restaurant and service station by John Vilelle and James Sturgeon, it was named by 10-year-old Victor Chatten in a contest advertised in the Balboa Times. The distinct Mediterranean style of the original buildings, with arches and red tile roofs, quickly made it a recognizable staple of Newport Beach as it helped shape and inspire the town in its early stages. The Arches began as a basic roadside diner, featuring steak, seafood and celebrities in the 40s, 50s and 60s. The restaurant and its menu flourished together, and was touted for its French food by the early 1970s. 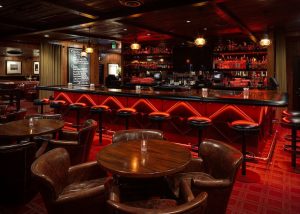 The Arches became A Restaurant in 2008, and while its appearance and function have changed over time, its commitment to customer and community has not. With its seasonally-inspired, contemporary new American menu, Chef Jonathan Blackford and his team showcase the restaurant’s relationships with many local farms and purveyors. His regularly changing menu consists of sophisticated dishes of land and sea that pair perfectly with A’s cozy, romantic and lively atmosphere. This year, A Restaurant celebrates 90 incredible years and is the oldest operating restaurant in Orange County.

The Newport Beach location opened in 1975 and another in Corona del Mar 20 years ago in 1996. The Avilas credit the longevity of their family restaurant to the love and unity of their family, Mama’s authentic recipes, their pledge to serving fresh food made from scratch and a decision to have a member of the Avila family oversee each restaurant. Dining at Avila’s is like being a part of their family. 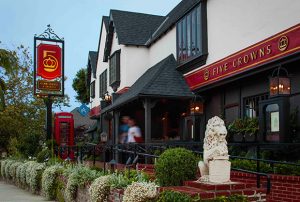 The Five Crowns opened quietly on the night of April 14, 1965 without any pomp and circumstance. There were no fanfares, no spotlights – and certainly no advance advertising. The historic building housing Five Crowns had been the site of a series of restaurants, all of which had failed. Nestled in the then-sleepy little village of Corona del Mar, the new restaurant was off the beaten track– nearly two hours’ drive away from the closest urban center, Los Angeles. At the time, large stretches of Orange County were undeveloped, and the restaurant had to rely on summer tourists and a small community of local residents for existence. A decade later, Corona del Mar, Newport Beach, and all of Orange County would boom and Five Crowns became the most popular restaurant in OC and a leading dining spot for all of Southern California. 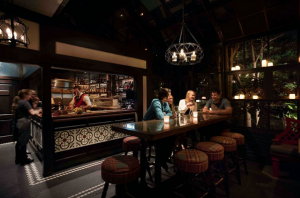 Five Crowns’ founder, Richard N. Frank, was captivated by things British and dreamed of creating a restaurant that would bring the cozy warmth and charm of an old English country inn to Southern California. Most of all, he wanted his restaurant to stand the test of time – to be a place that would welcome guests again and again through many years with extraordinary food, excellent value and friendly, caring hospitality. It seems Richard’s dream has become a reality. Five Crowns has been noted in guidebooks and historical papers as a landmark – the most authentic replica of an English country inn in North America. Most importantly, it has served generations of loyal customers, many of whom visit it to celebrate the most special occasions of their lives. 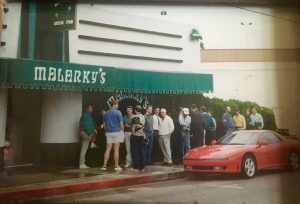 Malarky’s has long been a well established restaurant and bar on the Newport Peninsula for over the past four decades. Founded in 1977 by Bill Hamilton (owner of The Cannery) he owned and operated the pub until Spring of 2010, when he decided to retire. Malarky’s has been a center for social and dining events loved by regulars and tourists alike. Here, you’ll find them sitting side by side at the bartop sharing stories over a cool beer or a hot meal.

The new owner is a local restaurateur who has been working hard to restore Malarky’s to its original luster – updating the areas that needed modernization while simultaneously preserving its historic atmosphere. Upgrades to the restrooms, kitchen, and decor as well as nearly doubling the number of flat panel HD TVs and installing a new audio system are just a few highlights of the improvements made to the restaurant. 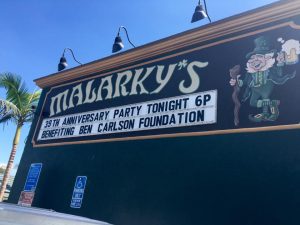 Malarky’s serves a full lunch and dinner menu, with weeknight specials and Newport Beach classics, such as the famous Tuesday Prime Rib Dinner, still offered at $11. Malarky’s is also known for its lively after-hours where you’ll find OC residents and tourists converging together at the bar both weeknights and weekends.

Mama D’s
The story of Diane Davidson (Mama D) begins in New York where she raised her family and cooked for her husband and seven children, before moving out west to southern California. The move was largely due to their love for the beach. 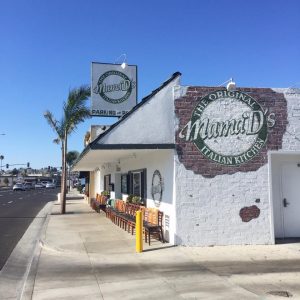 The original restaurant opened its doors in Manhattan Beach in 1992 and in 2005, another followed in Newport Beach. Using her Italian grandmother’s old fashioned and time tested recipes, using the very finest ingredients, Mama D’s strives to provide customers with an experience unlike any other. On a busy night, you will have to wait for a table, but while lingering outside, or sitting on the sofas in front of the kitchen, you’ll be treated to little bites coming out of the kitchen, just like you would if you’re dining at Mama D’s house.

Age-old favorites such as the garlic bread, fried calamari, and stuffed mushrooms are unrivaled, as are any of the pastas with the restaurant’s signature marinara or vodka sauces. 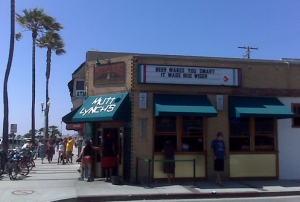 Mutt Lynch’s
If you have been to Mutt Lynch’s, you’ll know that this is one of Newport Beach’s best dive bars since 1976. If you have not, this long-time favorite sits on the water’s edge with views of the pier and Catalina Island. Locals have been hanging out at the Newport Beach Peninsula ocean front joint for four decades where everyone, including out-of-towners, newbies and old hands all come out to enjoy the food, drinks and fun.

The menu today includes a wide range of items such as salads, sandwiches, wraps, exotic pizzas, and fish and chips are among the favorites. On game day, come out to support your team with any of the flat screen TVs dotted throughout Mutt’s. Sure, they used to call themselves “the frat house that blew up”, but these days, Mutt’s has matured into a friendly house of libations for all to enjoy. 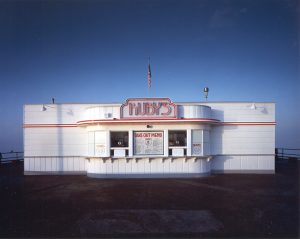 The idea for Ruby’s Diner was born in 1980 after a run on the beach. Doug Cavanaugh had just returned to his native Southern California after successfully restoring and running a restaurant on Nantucket Island off Cape Cod. A dilapidated building at the end of Balboa Pier caught his eye, and though in bad shape, Cavanaugh believed its architecture lend itself well to that of a 1940s diner.

He invited some old high school buddies to throw in some money and work with him on the diner. Everyone thought he was crazy except Ralph Kosmides, a junior high friend. To make the restaurant feel authentic, Cavanaugh and Kosmides combed antique and memorabilia stores throughout Southern California to find 1940s artifacts, and did most of the remodeling of the building themselves. 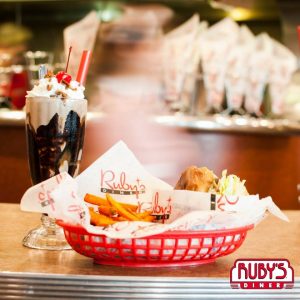 Today, Ruby’s Diner is synonymous with southern California dining offering a large variety of breakfast favorites, vegetarian selections, as well as a ‘lite menu” and fountain treats. The signature red vinyl booths and white Formica tables are instantly recognizable by young and old alike. Cavanaugh and Kosmides still take an active role in the operation of each restaurant today, never losing sight of what they consider the ‘basics’ of providing great food and spectacular service in a sparkling clean restaurant. 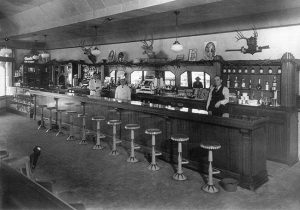 Located on the Balboa peninsula at McFadden Square just steps from the Newport Beach pier, The Stag, quickly became a favorite watering hole among locals and visiting tourists alike.

The Stag Bar and Hotel first opened its doors in 1908 following the completion of the historic two story building it has called home for over a century. The Stag’s illustrious history includes one of gambling, as well as several of the hotel rooms above the bar serving as a brothel. During prohibition, it became Stag Cafe, rumored to offer beer upstairs, while sarsaparilla and billiards kept the doors open at the bar downstairs.

In the early 1930s, The Stag saw a complete remodel eliminating the saloon-looking taxidermy, gun rack and spittoons, making way for more upscale fixtures, including a restyled bar and back bar with period art deco features. The Stag continued its popularity in the 70s and 80s even though the old familiar place was showing its age. 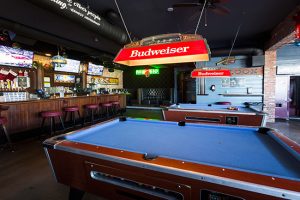 In 2014, the bar underwent a complete restoration and expansion for The Stag’s centennial, restoring the bar to its former grandeur and was rechristened The Stag Bar + Kitchen upon completion in late 2015. The rooms upstairs were also converted into luxury suites, available for weekly and seasonal rental. The Stag retains the warmth of a historic establishment where visitors continue to enjoy a libation or two while socializing and shooting pool. 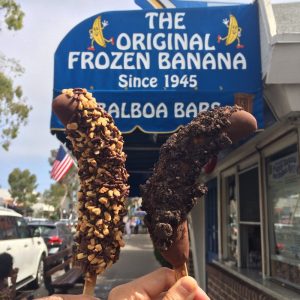 Though not a restaurant, Sugar ’n Spice on Balboa Island has remained a landmark since they opened their doors in 1945. The shop was the first frozen banana and is the one-and-only “Original”, being the very first frozen banana and Balboa Bar shop on the Island. Bob and Dorothy (Dot) Cook opened Dot & Bob’s Candy Shop on Balboa Island in the 1940s. When their son, Don, was about 12-years-old, his mother asked him to put some bananas in the refrigerator but he mistakenly put them in the freezer. When found, the frozen bananas were about to be tossed out when Bob had the idea to dip them in fudge. They dipped another and rolled it in English Toffee crumbs. They were so good that Dot & Bob’s started selling frozen bananas. In 1945, Dot & Bob’s was sold and became Sugar ‘n Spice.

In 1995, Helen Connolly bought the business from a woman named Betty who taught her how to make the perfect Balboa Bar. Connolly, Sugar ‘n Spice’s third and current owner, has been the proprietor of the shop for more than 20 years.
Last year marked Sugar ‘n Spice’s 70th Anniversary, and as much as times and fashions have changed over the years you can always count on each and every banana and Balboa Bar being made-to-order, hand-dipped – TWICE – in milk chocolate, then rolled in the favorite toppings of their choice.

Corona del Mar’s The Bungalow restaurant has been a local favorite for two decades now. Whether it’s a casual dinner, or celebrating a milestone, the restaurant promises diners an evening of excellent food, wine, cocktails, atmosphere and service. Co-owners Jim Walker and Louie Feinstein are proud of the friendships they’ve established over the years and look forward to continuing their vision now and for the future.

Located at the crossroads of Coast Highway and MacArthur Boulevard, The Bungalow’s shingle façade, striking black awnings, and Arts and Crafts font displaying the restaurant’s name exude the feel of dining in a charming Craftsman retreat. The menu specializes in USDA Prime Steaks, fresh seafood and handcrafted cocktails, and oenophiles will delight in the 160-label wine cellar featuring exclusive premium vintages.