To the cynic, the word “trend” could easily translate into “fad,” which is shorthand for “ideas that won’t be around after a few months.” Sometimes, their dour outlook is spot on. It’s safe to say Pokemon Go fits this description.

The hopeful person, on the other hand, looks at the word “trend” and secretly hopes that he or she can use it to rebuke the cynic. This is done when a trend develops staying power; a special kind of momentum that eventually allows it to level up and join the realm of permanency. Brussels sprouts are no longer a trend because they’ve been ubiquitous for nearly a decade, and they show no signs of somehow growing unpopular with the masses.

What follows is some of the culinary trends that you may encounter as you go out and about during Newport Beach Restaurant Week. We like to think these trends will not fit the parameters of the cynical viewpoint. Rather, we’d prefer to assume they will be foundational delights when the 2018 iteration of restaurant week rolls around. 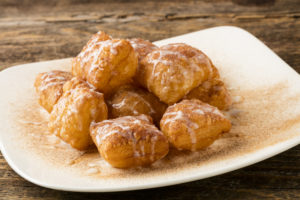 Dessert for Breakfast – We’ve all heard that breakfast is the most important meal of the day, to the point where it probably sounds like a cliché. While there’s tremendous value to such sentiment, it inadvertently draws attention away from breakfast’s other superpower. That is, it can be the most decadent meal of the day. More and more restaurants are taking this concept to its obvious conclusion, offering end-of-the-evening-meal treats whose building blocks are poached from the beginning of the day. The Beignets at Lighthouse Bayview Café provide an exceptional way for you to say good morning at night’s end. Pillow light, sprinkled with cinnamon sugar, and drizzled with cream cheese icing, these New Orleans-inspired breakfast treats practically poof into nothingness when you pop them into your mouth, leaving behind an indulgent cloud of sweet, doughy essence in the process.

Fermentation – When you hear the word “fermentation,” your mind may automatically gravitate toward the realm of winemaking. Not that you’d be blamed, of course; it’s the reason your favorite Cabernet Sauvignon doesn’t taste like grape juice. Yet this unique process of converting natural sugars to acids is not fully reserved for the fruits of the vineyards, and chefs are exploiting this truism more than ever. It’s lead to the proliferation of dishes whose typical flavor profile gets bent by intriguing notes that fluctuate between zippy and sour. This even includes items that were themselves considered trends not too long ago. The Kimchi Brussels Sprouts by The Cannery is a prime example of this, as the popular cult-to-mainstream veggie undergoes a tart transformation thanks to the traditional Korean fermentation method. The dish is also topped with a sunny side egg to take the edge off. It’s a well-composed side that instantly adds tremendous depth to whatever main entrée it accompanies. 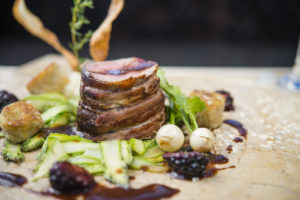 Meet the “New” Meats – Move over beef, poultry, and lamb. There’s new game in town, as bison, elk, venison, and other alternate proteins are making an ascension from hunting targets to legit dining options. It’s a trend that’s been a long time coming. After all, a good chef can subdue the gaminess that sometimes give these meats notoriety. When a master chef like Yvon Goetz deploys his skill set on the various cuts, a treasure trove of utter succulence awaits. You can experience Goetz’s immense skill in this arena for yourself when you Take a Walk on the Wild Side at The Winery Newport Beach.  Each night, he prepares a rotating special of fresh fowl and wild game or fowl, from squab and partridge to all-natural Colorado buffalo to Australian kangaroo. Regardless of what the star of the night is, it stands poised to delight your taste buds – that is, if you’re game enough to try.

Creative Food Waste Reduction – The amount of food that gets thrown away by restaurants, grocery stores, and other enterprises associated with edible product is staggering. Studies show that as much as 40% of all food produced in the U.S. gets tossed out. Reducing this number is a monumental task, but a greater number of enterprising chefs are taking aim at whittling down this unfortunately large percentage by finding creative ways to turn pieces and parts of fruits, veggies, and animals that would seem destined for the dumpster into delicious dish components. Not surprisingly, one of the local chefs leading the charge in this unique spin on sustainability is Farmhouse at Roger’s Gardens Executive Chef Rich Mead, who was doing the farm-to-table thing before farm-to-table became an official thing. His Roast Carrots and Burrata Cheese offering showcases the entirety of the root vegetable, as carrot top salsa verde is served as an enticing accompaniment. It’s the kind of dish that satisfies, and not just because it tastes good. 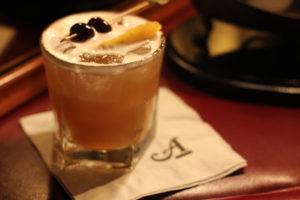 Spice up Your Life – There was a time when spice was a pillar of intimidation for the average palate. This is no longer the case. This interest in kicking things up a notch has also been accompanied by a keener interest in traversing diverse avenues of spice, from relatively milder flavors like cilantro to more prominent stuff like Cayenne pepper. Restaurants all over Newport Beach have used this interest in spice to spark a wealth of creativity, but such matters of flair aren’t solely contained to the kitchen. This is definitely the case at A Restaurant, whose perpetually popular bar serves up spice-driven beverages like the Uptown Funk. This potent potable builds spicy ginger shrub, lemon, honey, and egg white atop a rye whiskey base, resulting in a killer cocktail that enlivens the palate just as much as it refreshes. 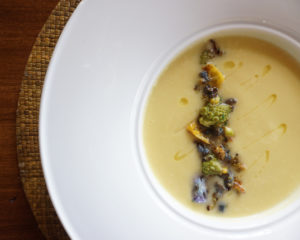 Cauliflower Marches On –  Vegetables are continuing to dominate the dinner plate in 2017, including the darling of the cruciferous variety: cauliflower.  A few Newport Beach Restaurant Week menus are in on the trend.  If the beachfront locale of Tackle Box isn’t enough to reel you in, their infamous Buffalo Cauliflower will seal the deal.  Top Chef alum, Brian Huskey, has this dish mastered. It is tangy, spicy  and cooked to perfection.  For just a moment, you may forget you’re eating a vegetable.  Andrea at Pelican Hill, known for their locally sourced, Tuscan inspired cuisine, offers an Heirloom Cauliflower Soup, enhanced with spiced cauliflower florets.