Is there any better way to celebrate National Beer Day than by the coast, sipping on a cold craft beer, and munching on some tasty snacks? Really, that’s probably the only proper way to honor this fine holiday taking place on April 7th. Check out these great Newport Beach spots to broaden your craft beer palate.

Grab a flight of some incredible brews and small bites and cheers to National Beer Day! 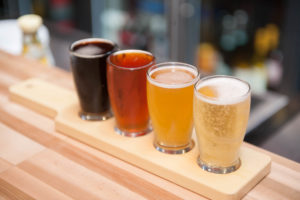 With a diverse menu of delectable American classics and an impressive list of draft beers, Parkstone has a little something for every taste. They use locally-sourced produce when possible and are all about creating an inviting, comfortable experience for guests. Not sure which brew this day calls for? Pick a flight of four from their list of over 50 draft beers — they have you covered (and then some). Parkstone offers some gnarly fries to go with beer that you can’t miss out on. The Cajun Steak Fries served with chipotle ranch and the Sea Salt Steak Fries mean serious businesses. 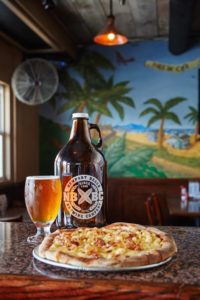 Situated on the Balboa Peninsula, Newport Beach Brewing Company (NBBC) offers a wide selection of award winning brews and tasty, high-quality bites. With one of the most spacious outdoor dining areas in the neighborhood, NBBC is the perfect place to enjoy a handcrafted beer and watch a sporting event. NBBC holds the spot as the only Craft Brewery in Newport beach and this local brewery has won Gold Medal at the Great American Beer Festival. Head over to this local favorite and grab their signature BrewCo Ceviche or BrewCo BBQ Style Nachos and a Newport Beach Blondie. 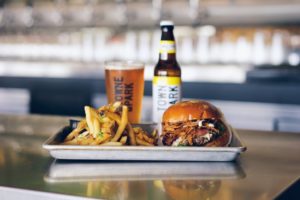 Great beer, killer burgers, and an engaging environment are all in play at Crow Burger Kitchen. The menu features a diverse group of over 15 craft beers, many of which are from local Southern California breweries. Crow Burger Kitchen works with farmers, ranchers, and markets to get the fresh-daily ingredients that are used in their signature burger and other delectable bites. So stop by Crow Burger Kitchen and pair excellent Belgian ale with the Chicken Lollipops (served with buttermilk aioli and house hot sauce) and I promise, your day just got a whole lot better. 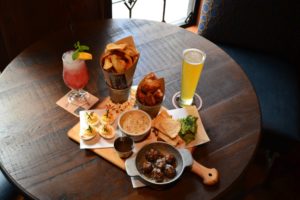 Offering a casual, friendly environment, SideDoor is the ideal place to grab a beer (or two) with friends. At this English-style gastropub, you’ll find excellent service, fresh seasonal menu choices, and an impressive list of international craft brew. Can’t pick just one? Try a flight of beers. This charming restaurant, located in a historic building in Corona del Mar can be adored by craft beer and artisan food lovers alike. So grab a Bell’s Amber to go with the Chef’s Cheese or Charcuterie Plate. 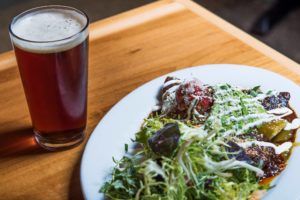 Within Eat Chow’s list of craft beers sits “Not Just For Breakfast Beers.” From a dark, caramelly, rich espresso beer to the lemonade beer with light hops and a refreshing finish, these artisan brews are just a taste of Eat Chow’s list of local and international craft beers. Not up to try an espresso beer? Go for the citrusy and spicy, crisp Einstok Icelandic White Ale or Bear Republic Racer 5 IPA, a west-coast IPA with bold hops. Whichever craft beer you’re feeling that day, don’t leave Eat Chow without grabbing a bite to eat. You can’t go wrong with the Truffle Parmesan Fries or Grilled Artichoke! 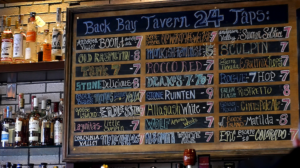 Situated inside Whole Foods Market at Fashion Island, Back Bay Tavern serves up local and organic craft beers and quick bites with a gastro-tavern vibe. It is one of the best hangout spots in Fashion Island and the tavern’s patrons understand why. Their brew selection, written in chalk on a blackboard, boasts over 20 craft beers and the food options use fresh, locally sourced ingredients. Unsure of which beer to order? Their bartenders are extremely knowledgeable and can help you choose the perfect one. Grab some Tavern Sliders or for a lighter option, Cauliflower Nachos, and a cold beer at this quaint Newport Beach spot. 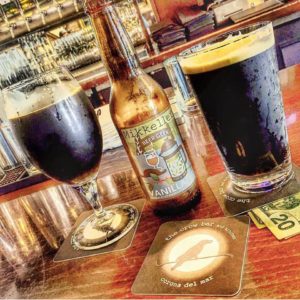 Think of a traditional pub. Now think of a trendy, innovative eatery. Combine the two and you have The Crow Bar and Kitchen. With an extensive list of flavorful craft brews (over 20 of them) and list of upscale pub food, this spot is perfect for a night out. The creative beer list includes Stone Brewing Company’s Arrogant Bastard Ale, a strong, sophisticated beer, and Ballast Point Brewing Company’s Ballast Point Bonito Blonde, a well-balanced brew, to name a couple. Some crowd favorite bites are The Sausage Trio (served with a fresh baked pretzel, beer mustard, and “crow krout”) and the Tots, which can be ordered plain, covered in bacon and cheddar, or truffle and goat cheese. Hop and over to The Crow Bar and Kitchen for a great craft brew and tasty bite!