Fathers in TV commercials are far too often portrayed as bumbling idiots who, without the intervention of his wife, children, or the family pet, are a constant threat to turn their home into a pile of rubble because of their abject stupidity. This is most unfortunate, because this archetype tends to undermine how valuable a dad is to the family unit.

A good father is a coacher of little league teams and a fixer of bicycles. He’s a teacher imparting lessons on how to handle life’s rampant unfairness to his children; He’s a yeoman who puts in overtime so his kids can have that toy or video game they so desperately want. He’s a wise sage whose guidance is underscored by a desire to transform the next generation into fine, upstanding citizens of the world. When you put all of this into perspective, two things become clear. Firstly, dads are pretty awesome. Secondly, a tie makes for a lousy Father’s Day gift.

When you put all of this into perspective, it’s rather absurd that the clichéd Father’s Day gift is a necktie, especially since it’s something a lot of guys don’t really wear much anymore. The real way to show appreciation for pop should be far more substantial. Whether it’s rooted in material goods or tied to a thrilling life experience, a proper Father’s Day gift should symbolize the true worth of a strong, caring dad, even as we acknowledge that any symbol represents a mere fraction of dad’s genuine worth. In Newport Beach, these gifts can and should be paired with a meal. Regardless of what you end up buying for your beloved pop, you’re sure to find a dining venue in the city that extends the spirit behind the gift that’s given. 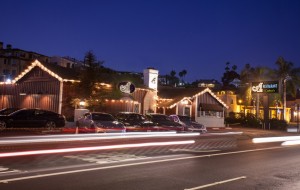 If your dad’s a gearhead that constantly named off his dream cars while he was teaching you how to do an oil change, why not make his fantasy a reality by gifting him an exotic or sports car rental? Newport Beach provides a perfect backdrop for this to happen, since Pacific Coast Highway hugs the coastline in glorious fashion around the Newport Coast area (the city is home to several exotic car rental places to boot). After your dad catches the thrill of the open road, meet him for dinner at A Restaurant, conveniently located at the intersection of PCH and Newport Boulevard. The restaurant is sleek and classic in its own right – its building has been a Newport Beach staple since 1926 – and Executive Chef Jonathan Blackford’s seasonally changing menu typically features progressive fare that is exotic yet approachable, much like the vehicle your pop may have taken for a spin. 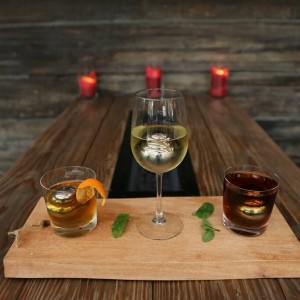 The true magic of a glass of premium scotch, whiskey, or bourbon is that it tastes like satisfaction, as if you earned the right to indulge in its complex aromatics and flavors. However, this feeling can’t be drummed up by the cheapo grog found on a grocery store’s bottom shelf. That’s why if you buy your dad a bottle of brown liquor – and he has earned such a purchase by being a dad – you better pick up a bottle of “the good stuff.” To help you and your dad determine what this might be, a trip to Bosscat Kitchen and Libations may very well be in order. After all, the venue is home to more than 100 brown spirits for you and your dad to explore, along with a sumptuous menu of Southern-kissed gastropub fare. Think of a visit here as market research; considering Bosscat’s spirits rotation changes on a monthly basis, the two of you could turn this into an ongoing research project. 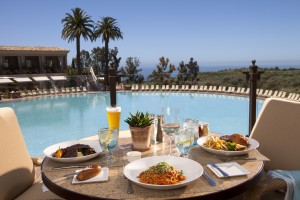 Gift: A Round of Golf at The Resort at Pelican Hill

The cynics may refer to golf as “a good walk spoiled,” but if your dad has a habit of picking up a bag of clubs and hitting the links, he probably views the game as an extended moment of Zen, with a couple of cold brews thrown in for good measure. Booking you and him a round at either one of the Tom Fazio-designed oceanfront courses at Pelican Hill Golf Club will turn his Zen into pure Nirvana. After spending a few hours draining putts and exchanging near-requisite “Caddyshack” quotes, retire to The Resort at Pelican Hill’s Coliseum Pool & Grill for an al fresco dining experience overlooking the coastline, which stretches out just beyond the infinity pool. Whether you swing by for a sandwich at lunch or a steak at dinnertime, one thing’s for certain: the “19th hole” has never looked this good. 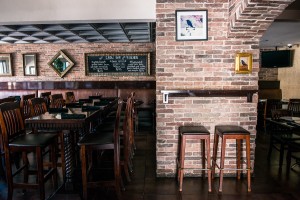 Society has gotten to the point where beer is no longer the red-headed stepchild in the world of adult libations. This is primarily owed to the explosion of craft beer; a category whose penchant for high-quality and complex flavors has turned brews into a most acceptable Father’s Day gift. Of course, you may need a little guidance if you’re not wise to the ways of this ever-burgeoning landscape. To that end, a visit to Crow Bar & Kitchen is a must. The Corona Del Mar eatery has been educating local residents on the magic of craft beer well before the term made the big boys in the brewing business fidget. Better yet, their beer-infused lessons can be paired with a seasonal rotating menu of intriguing New American and gastropub cuisine. 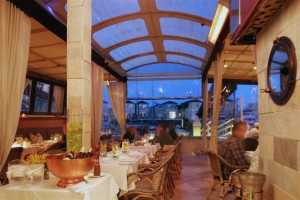 Even if your dad doesn’t own a boat, there still may be a part of his soul that yearns for the romance of the sea. This feeling’s particularly easy to cultivate in Newport Beach, where the siren song emanating from the perpetually alluring Newport Harbor tends to be cranked at high decibel levels. If your brood is lacking a seafaring vessel, then your best bet to answer this call is to rent a Duffy boat and tool around the harbor for the day. During your water-bound excursion, park your Duffy to the docks by Lido Peninsula and dine at The Dock, where you can enhance your experience with a sumptuous meal of classic continental fare from foie gras au torchon to rack of New Zealand lamb with fingerling potatoes. 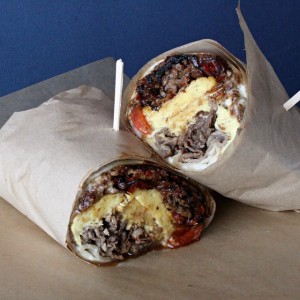 Meeting your dad out by the crashing waves of Blackies or Newport Pier may be the most Orange County thing you can possibly do to celebrate Father’s Day. Yet if you have fond memories of waking up early to catch a wave with your old man growing up, repeating the process may be the most endearing thing you can do together. Of course, you’re going to need to eat something to replenish your energy afterward, which means a trip to Dory Deli should be in order. The restaurant’s bevy of grab-and-go breakfast items like the egg, steak, and house-made cheese whiz-stuffed ‘Sweat Pants” burrito is ideal if the rest your day is packed with work or family obligations. It’s also a prime spot to chill with a burger or sandwich if your surfing session extends into the lunch hour. 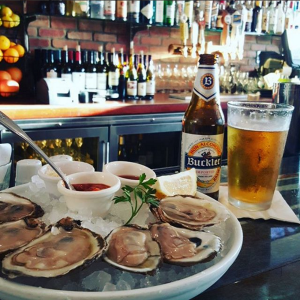 Gift: A Day at the Beach

If your father has long filled his days with tireless toil, he may not want nothing more than to do absolutely nothing. If this is the case, reserving a day where the primary activity is to dig his toes in the sand and gaze out at sun-glistened ocean waves may be the ultimate way to thank him for carrying out his fatherly duties. If you decide to set up his day of blissful nothingness along Balboa Peninsula, you can carry this singularly casual vibe through the dinner hour with a visit to Fly-N-Fish, where an unfussy experience reminiscent of an old-school seafood shack awaits. But don’t let the laid-back ambiance fool you: Executive Chef Julio Hawkins is a master of coaxing out exquisite flavor out of even the simplest looking fare, such as his mind-blowing take on clam chowder. 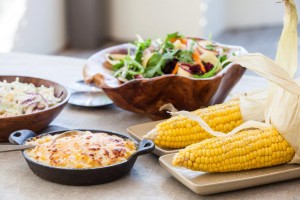 Barbecue. Bar-B-Q. BBQ. It doesn’t matter how you spell the word, because it ultimately translates into a culinary experience that will bring immense pleasure to your dad, provided he’s a carnivore. If you’re celebrating pop through the glory of smoked meat, it’s only fair that you take steps to ensure he’s not the one that ends up manning the grill. Perhaps the best way to ensure this doesn’t happen is to take him to Oak Grill at Island Hotel Newport Beach on a Sunday afternoon and have him dive into the restaurant’s Slow Smoked Sundaze menu. This special summertime feast features Executive Chef Marc Johnson’s exceptional take on essential cookout items like brisket, baby back ribs, fish, and even fried chicken. It’s a meal best experienced on the restaurant’s sprawling outdoor patio, which is to be expected. After all, it is a barbecue. Or a Bar-B-Q. 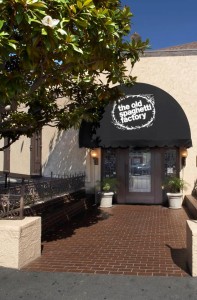 It almost sounds like a cliché, but the concept of your dad wanting to be surrounded by his family may be one that is sacred. Consider the reasons for this: Maybe your dad works long hours or constantly travels for business. Perhaps the demands of your own schedule have made getting together a difficult proposition. Or it could be that he’s just itching to spoil his grandchildren rotten. Whatever the case, a dinner at The Old Spaghetti Factory seems like the perfect backdrop for a special family meal to take place. Nobody has to cook or clean up, there’s plenty of menu items for even the fussiest of kids and grandkids to enjoy, and since the venue’s been around since 1975, it may even kindle fond memories of family gatherings past.

If your dad is a die-hard Angels fan, there’s probably a few things you’ve learned over the years. For instance, you know what a relief it was to him when they won the World Series in 2002. You also know to never bring up the 1986 ALCS in his presence under any circumstance (seriously, just don’t). And while the Halos may not be doing that great this year, your baseball-loving dad would still get a kick out of taking in a game with you. The club is up in Oakland playing the A’s during Father’s Day this year, but you can still head to Yard House in Fashion Island and watch the game. During the contest, you and your pop can dine on easygoing American fare and imbibe in craft beer selections you won’t find at the stadium. Even if the Angels lose, you’ll both win.