Enjoy Dinner & A Movie During the NB Film Festival

For the past 16 years, the movies showcased during the Newport Beach Film Festival have been evokers of raw emotion. These flicks do more than merely make us laugh, cry, cheer, and gasp. They reach out and activate touchstones within our hearts and souls with a touch that can be as gentle as a lilting caress or as fierce as a bare-knuckle roundhouse. Regardless of how the stroke lands, you’ll feel alive when it happens.

Good food acts in a similar manner. A delicious, well-composed plate of food won’t just satiate your hunger. It plays upon memory, becomes a conduit for warm conversation amongst friends and loved ones, and renders the persistence of time and life obligations irrelevant, if only for a few scant hours. It too brings life, and not in the mere biological sense.

If you are going to enjoy one of the fine films being shown during this year’s Newport Beach Film Festival April 21-28th, it only makes sense to prepare for your evening of cinema with a sumptuous culinary indulgence from one of Newport Beach’s esteemed eateries. What follows is not only a list of dining venues to enjoy, but suggested movie pairings to create an even fuller experience. 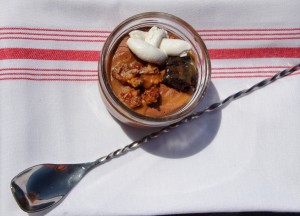 In the movie The Violin Teacher, a talented musician must transition his life’s journey from pursuing his dreams to showing teenagers how to follow their passions. It’s a path he finds to be bumpy and difficult, yet ultimately deeply rewarding. You can honor this journey in a unique way by dropping by the Balboa Bay Resort’s charming gastropub and ordering up the Rocky Road; a sinful dessert consisting of milk chocolate mousse, brownie, walnut, and homemade marshmallow. As its name implies, the dessert isn’t exactly smooth, but that’s a big reason why it’s so delightful. 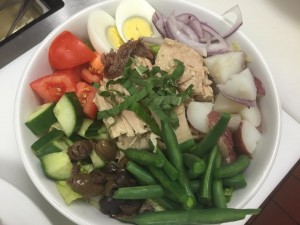 Sometimes, a connection between film and food can be as simple as the movie title. This is the case here; the Fashion Island French bistro connects with the festival’s French Spotlight film Too Close to Our Son (Au Plus Pres Du Soleil) solely based on the latter’s non-translated moniker. This shouldn’t stop you from checking out the taut drama, nor should it prohibit you from paying a visit to the restaurant and diving into their beautiful, bountiful Nicoise Salad. The dish’s classic mélange of tuna, anchovies, heart of romaine, eggs, potatoes, green beans and other garden goodies create a complex earthiness, while the inclusion of a wine vinaigrette provides the right level of zippiness. It feels cosmopolitan yet unmistakably Newport all at once – a trait most certainly shared by the festival.

Part of the political satire My Internship in Canada takes place in rural Quebec. What better way to prepare for a poke at Canadian government than indulging in this waterfront restaurant’s Chowder Fries? Found on the eatery’s Lounge menu, the dish itself is a bit of a skewer of the classic Quebecois bar food, replacing the dish’s traditional gravy and cheese curds with a generous pour of chunky, creamy chowder and an accent of sriracha. It’s a delicious bite, and that’s no joke. 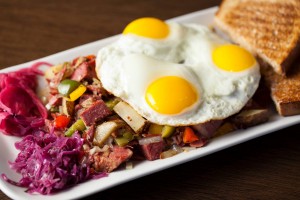 The titular character of the festival’s Irish Spotlight film My Name is Emily embarks on a journey to track down her father. While not a road trip movie per se, viewers do get a chance to feast their eyes on the inimitable Irish countryside. So why not feast on some traditional Irish grub as well? This venerable Balboa Peninsula Eatery’s Corned Beef Hash & Eggs breakfast dish certainly fits all the requirements of a dish befitting the Emerald Isle. It’s straightforward in its presentation and hearty in its portion size, so don’t expect anything but a big plate of deliciousness. Ultimately, that’s what makes the dish beautiful. 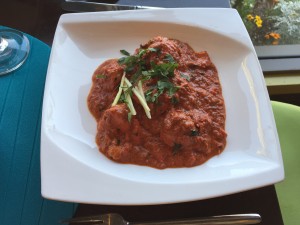 The Man Who Knew to Infinity is a film about a young Indian man who overcomes challenges fueled in part by wrong-headed perception to become a math pioneer. It seems fitting to ponder this film’s plot by stopping in this cozy Corona Del Mar eatery to enjoy their Chicken Tikka Masala, chiefly because Indian cuisine seems saddled with an abundance of misinformation. This traditional dish consisting of roasted chicken and a tomato-based sauce will not burn the taste buds off your mouth, nor will it arrive to your table buried in a heap of curry. It will, however, provide you with a proper appreciation for the true, nuanced flavors of Indian food.

The plot of the film kicking off the festival, After the Reality, focuses on a reality TV show contestant. As such, it makes perfect sense to celebrate this film with a visit to the Mariner’s Mile restaurant co-owned by celebrity chef and reality show personality Mario Batali. It also makes perfect sense to save room at the end of your meal for the venue’s signature dessert, the Caramel Copetta. The eponymous gelato is tremendous on its own. When scooped up with the dish’s accompanying marshmallow sauce and salted Spanish peanuts, it becomes otherworldly. 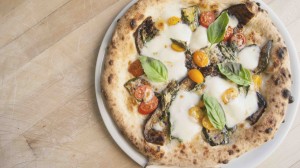 The crux of this year’s Italian Spotlight Film Me Myself & Her explores a relationship that’s substantially more complex than it appears. A well-crafted pizza mimics this deceptive depth in its own way merely by being a transcendent pie. Case in point: The Capricossa pizza whipped up by this semi-hidden gem near Balboa Island. It looks like a simple red-sauce pizza topped with all sorts of goodies like mushrooms, prosciutto, artichokes, and homemade mozzarella. Behind this basic build is an immense depth of flavor that stretches well beyond whatever you used for fuel during late-night collegiate study sessions.

It feels virtually mandatory to dine at this Fashion Island venue before you head across the street to Edwards Big Newport to check out the film Epitaph. After all, the film takes a pretty deep dive into Mexican history – specifically, it takes place in 1519, during the era of Spanish conquistadors. Conversely, the man behind Red O, Rick Bayless, built his celebrity chef status through years of exploring the possibilities of genuine Mexican cuisine. His culinary spelunking results in sumptuous traditional dishes like the Carnitas in Red Chile Gaujillo, where succulent pork is served atop a slightly sweet and ideally piquant orange-chile sauce and accompanied by whole black beans and jicama-citrus petite salad. Think of the dish as the history lesson before the history lesson. 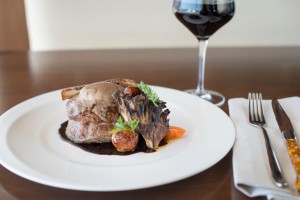 The film High-Rise offers a glimpse of how luxury’s ritzy affectations can mask the basic nature of humanity. This motif lends itself rather well to this waterfront fine dining establishment. The sheer elegance is palpable within the blue and silver-accented venue, courtesy of elements like large harbor-facing windows and chic chandeliers. The existence of the restaurant and its exquisite ambiance is driven by a basic need to eat and drink, and the Bone-in Filet Mignon deftly walks this fine line drawn between substance and sustenance. It is meat at its core; the inclusion of foie gras butter, hen of the woods mushrooms, and black garlic marmalade make it meal worthy of the restaurant’s opulent setting. 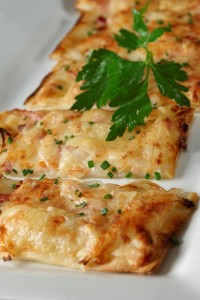 A good story often requires the audience to do a little digging, and a little excavation is needed to appreciate the connection between the film Baby, Baby, Baby and the gorgeous two-story waterfront eatery. After all, the film is about two artists trying to balance a love of art and each other. However, the link crystalizes when you realize the restaurant’s Executive Chef/Partner Yvon Goetz’s unofficial catchphrase is “Oh, baby.” You may join him in this saying when you order YG’s Alsatian “Pizza”: a sumptuous flatbread starter topped with crème fraiche, Applewood smoked bacon, onion, and gruyere cheese. The dish’s well thought-out flavor composition and delightful texture make it an edible that’s artistic in its own right.