Winning Bowl Options to Dig Into in Newport Beach

Back in the day, bowls were the most boring component of a place setting. When you saw one, you knew that its purpose was to either welcome a salad into its convex shape or as a makeshift trash can for seafood shells. Sure, there was the potential for a scoop of ice cream at meal’s end, but you knew there’d be a separate bowl for the melty treat, so that didn’t count.

These were simpler times; an era of hunks of meat and scoops of potatoes. We know better now. From vibrant cubes of fresh fish to earthy, seemingly infinite strands of ramen noodles, the content within a bowl’s confines can represent a wealth of enticing possibilities. And no offense to salads, but these are a little more exciting than pile of leafy greens. 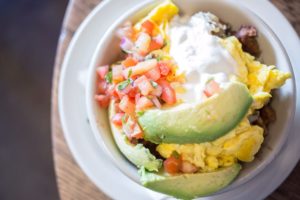 Alta Coffee – No breakfast item screams SoCal more than a plate of chilaquiles. Notice the word “plate” in that last sentence. It’s there because that’s what it’s usually served on. Yet this famously cozy Balboa Peninsula coffee shop doesn’t opt for the usual when they whip up a Bueno Bowl. All of the classic elements of chilaquiles are present and accounted for here: Two scrambled eggs, black beans, potatoes, bacon or veggie sausage, and cheddar cheese, all sandwiched between layers of tortilla chips and topped with salsa, avocado, and sour cream. It’s just in bowl form. It’s a little unorthodox, but its sublime flavor makes such matters of unorthodoxy irrelevant. 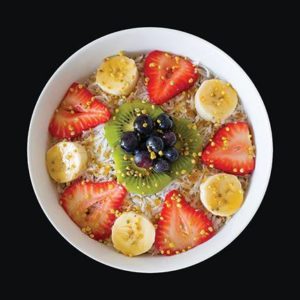 The Original Banzai Bowl – At first glance, the acai berry may come across as a hip health food trend geared toward the granola and yoga set. And there’s no denying that this Brazilian fruit is a superfood that’s packed with health benefits. Yet when the berry is part of a proper acai bowl, it can be the centerpiece of a good-for-you breakfast treat that tastes more sinful than a dozen donuts. This Balboa Peninsula joint whips out several iterations of the sneaky-decadent breakfast delight, each of which jam packed with flavors that taste more indulgent than they are. The Sharks Cove, for instance, mixes acai with strawberries, bananas, and either apple juice or hemp milk, then tops it off with granola, blueberries, gogi berries, more strawberries and bananas, and honey. It’s a treat that’s poised to take you to nirvana. All you need is a spoon…and maybe a confessional booth for later. 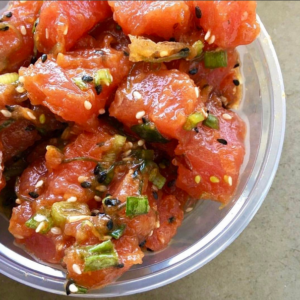 Bear Flag Fish Co. – Poke bowls are the new white-hot food trend in Orange County, replacing whatever hip and happening trend that we’ve already forgotten about. Of course, for this legendary Balboa Peninsula spot, their Poke Bowl has been more of a trendsetter, as people have been ordering containers of fresh cubed fish here long before your neighborhood joint took over the address where the now-defunct cronut shop once stood. And even when the poke craze flames out, this succulent item will still be going strong; a testimony to the excellence that governs the presence of each poke-packed container. 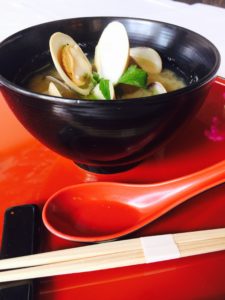 Bluefin – Miso soup, when prepared properly, sits at the intersection of simplicity and satisfaction. Indeed, the basic combination of miso paste and dashi stock – think soybean and fish – exudes a natural form of elegance by themselves. If you’re going to add something to this wonderfully balanced dish, it better be good. This truism is something this venerable Crystal Cove restaurant takes to heart, as evidenced through their lovely Clam Miso Soup. All that is added to the dish’s basic duo is a few sumptuous littleneck clams and some scallion. This slight augment keeps the integrity of a classic miso soup in place, even as it adds a thrilling touch of nuanced depth. 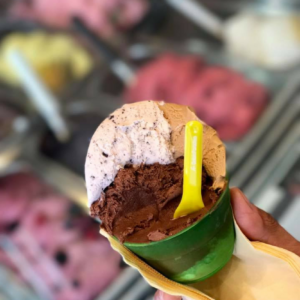 Gelato Paradiso – We had to include a traditional dessert item on the list. As such, we may as well reach for the stars. The polite way to describe gelato is that it’s ice cream made in an Italian style. Yet the more accurate description may be that it’s what ice cream wants to be when it grows up. Lower in fat and air but higher in sugar and more flavoring, gelato is far richer and denser than its ice cream counterpart. So now that you want to grab some, head on over to this Fashion Island institution and order up a scoop of Cioccolato post haste. Yes, it’s just chocolate gelato, but don’t let that deter you in the least bit. Remember, sometimes the simplest pleasures in life can be the most pleasurable.

Lotus Bistro – In some ways, pho is the cornerstone of Vietnamese cuisine. It’s a simple dish at first glance, but when you dive into whatever bowl it’s served in, you’ll discover an eclectic profile of disparate flavors that magically remain in perfect harmony with each other. The Rare Beef Pho served up by this humble little spot just north of Mariner’s Mile is a fantastic example of what happens when a wide swath of flavors manages to play nice with each other. The dish is served simply enough; slivers of rare beef come to your table swimming in a flavorful beef broth surrounded by rice noodles. However, the ready-to-add accompaniments are what truly give the pho its soul. They look a motley crew of intriguing flavors: Green onion, cilantro, bean sprouts, basil leaves, lime, and jalapeno. But when you put them together – and really, no accoutrement should be skipped here – beautiful music is made. 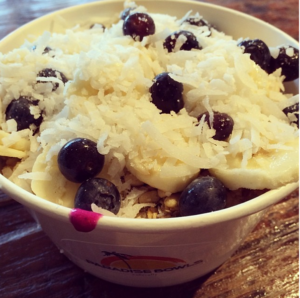 Paradise Bowls – Pitaya (also known as dragonfruit) might be the weirdest fruit to ascend to health-food superstardom. Crack open its red, cactus-like exterior, and you’ll find white flesh riddled with black seeds, giving it the appearance of white mint chip ice cream. While it looks odd, its slightly sweet, nutty taste makes it very easy to forgive its appearance. Much like the acai berry, pitaya has landed a starring role on the health food circuit, where its used in bowls whose indulgent tastes seem to contradict its good-for-you reputation. This spot near the Upper Newport Bay pushes the pitaya bowl’s dichotomy of health and decadence to the nth degree through its opulent Peanut Butter Pipeline offering. This sumptuous treat blends pitaya with banana, strawberries, blueberries, peanut butter, and coconut milk, then tops it off with a mélange of granola, honey, banana, blueberries, and coconut shavings. It really is healthy, we promise. 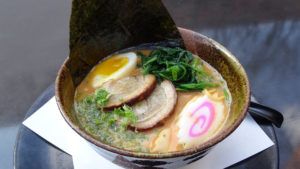 Sushi Roku – Forget the dried-up packets that come in rectangular plastic wrap – real ramen is a serious art form. The noodles undulate off the fork with more elegance. The broth contains more complex flavors. There are thin slices of protein involved, and no sliver packets of “flavoring” to be found. It makes for an exquisite meal, and the Hakata Ramen at this sleek Fashion Island venue flawlessly demonstrates just how mind-blowing the dish can be. A deep bowl of spicy miso pork broth provides the liquid foundation for a mix of delicate ramen noodles, succulent pork slivers, and other assorted goodies. You may never pick up a pack of the cheap stuff ever again. 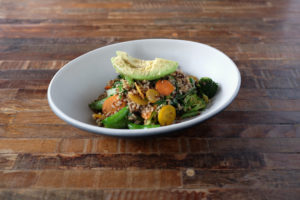 True Food Kitchen – Quinoa should no longer be considered a trendy foodstuff. The tiny grain seeds and its health benefits are here to stay. This is a good thing – when prepared properly, quinoa can add exquisite textural depth to any dish. It makes perfect sense that its crunchy goodness make an appearance here, especially since this popular health-driven restaurant calls Fashion Island home. The seed’s signature pop is at the forefront of the restaurant’s Teriyaki Quinoa Bowl, but it’s far from the only intriguing element in play. This bowl is also loaded with broccoli, heirloom carrots, mushrooms, avocado, toasted sesame, and avocado for your dining pleasure. You can also add a touch of chicken, shrimp, or grass-fed steak if you want to take the bowl to the proverbial next level. 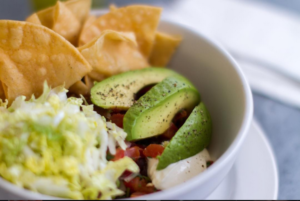 Zinc Café & Market – At its core, a proper breakfast burrito is brekkie in a convenient, hand-held form. But there are times when the encompassing tortilla can get in the way of what you truly want in the morning. Thankfully, this venerable Corona del Mar vegetarian venue has a terrific solution for these times. Their Breakfast Burrito Bowl is packed with scrambled eggs, vegetarian sausage, sautéed onions, white cheddar cheese, and other tasty accoutrements. All that’s missing is the tortilla. Of course, you can also order this dish in wrap form if you must eat your breakfast on the go.