Clean, briny, with nuanced vegetal notes, a perfectly plump oyster has more than enough flavor to excite your taste buds!

Newport Beach’s coastal presence makes the city a prime place to partake in a little bivalve slurping, as the following list demonstrates. You may not even have to slurp them up, depending on how they’re prepared. And while they do look a little funky – okay, maybe a lot funky – they’re so tasty, you won’t have to stare at them for very long. 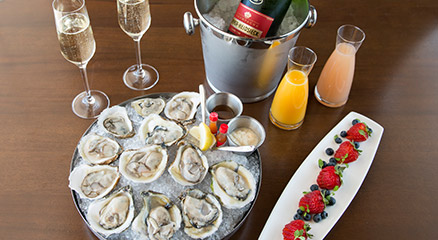 The Ritz Prime Seafood
Brunch pairings don’t get much more Newport Beach than oysters and champagne. While this dynamic duo is inherently decadent, pairing twelve plump, briny oysters with a premium bottle of bubbly can turn the mid-day feasting affair into something downright Bacchanal. By coupling Piper Heidsieck Champagne & a Dozen Oysters on their Brunch menu, this upscale Mariner’s Mile venue unabashedly aims to amp the pleasure as much as possible. Indeed, the combo of oysters and a bottle from the award-winning, historic champagne house nearly feels like a sin. But to paraphrase Martin Luther, if you’re going to sin, sin boldly.

Newport Landing
Close your eyes for a moment. You’re hanging out at Newport Harbor, perched on a second-story patio. The sky is a cloudless blue. Duffys, dinghies, sailboats, and yachts dart and glide on the water. The slight breeze strong enough to make sails billow, but not strong enough to force you to don a jacket. The deep bass of a distant boat horn gently intrudes. Don’t you want a ½ Dozen Oysters now? You should. To remedy this sudden need, get yourself down to this Balboa Peninsula restaurant, where the aforementioned ambiance – the patio, the boats, the oysters, all of it – is a daily occurrence.

Wildfish
Oysters can be a fabulous treat to indulge in during happy hour. They’re not too filling, they pair great with beer and wine, and they’re fun to down while chillaxing at the bar. Of course, no two happy hour oyster experiences are alike, as this north Newport Beach seafood venue demonstrate with their Angels on Horseback happy hour special. Each order yields a pair of seared prosciutto-wrapped oysters topped with parmesan and fig glaze, creating a complex flavor bite that’s sweet, briny, smoky, and tangy all at once. It’s the kind of bite that will restore your wings after a tough day at the office. 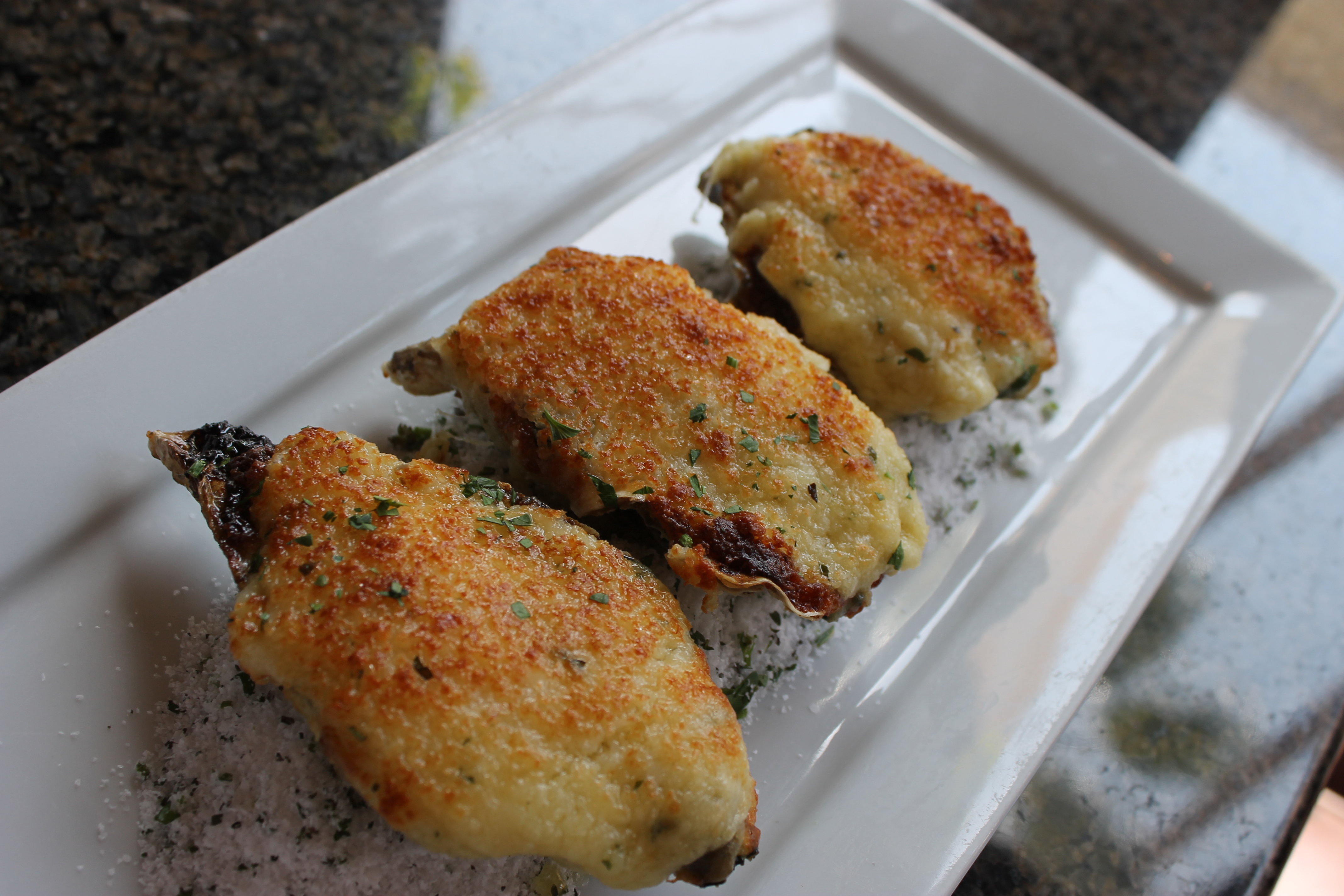 Bluewater Grill
Seafood and cheese usually make strange bedfellows, but there are a few exceptions to this rule. The most notable outlier is Oysters Rockefeller, where the presence of cheese along with some greens makes them a decadent indulgence worthy of being named after one of American history’s most famous tycoons. This essential Cannery Village restaurant creates an excellent version of the dish by using creamed spinach and melted Romano, thus turning the shellfish into sinfully rich bites filled with immense textural depth and complex flavors. John D. would be pleased. 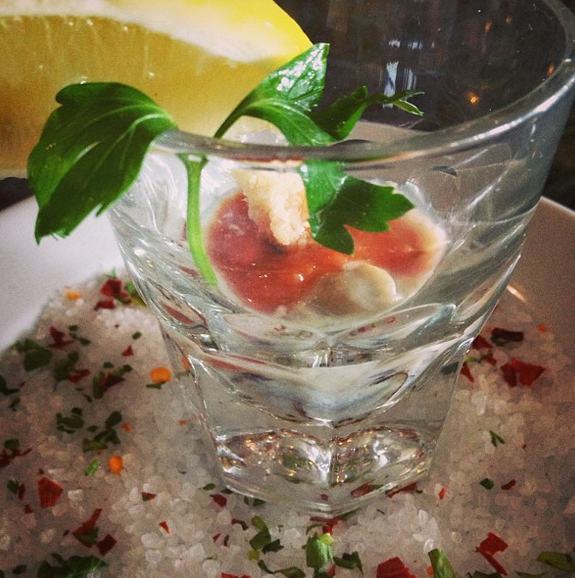 Fly ‘N Fish
There’s only one right way to eat a raw oyster: Quickly. This is why oyster shooters are a thing. If you’re going to take the time to move the oyster from shell to shotglass, you better make sure its new home isn’t boring. The Pacific Oyster Shooters served up at this oceanfront venue near the Newport Pier are certainly far from dull. The zippy accoutrements normally ensconced in the center of an icy oyster platter are conveniently added to the shot, so all you have to do is knock it back to enjoy its flavorful bliss. You can also request to add a shot of pepper-infused vodka or agave tequila into the mix if you want your shooter to have an extra bullet.

Crab Cooker
Oysters don’t take up much room on a plate, leaving plenty of space on larger platters for various seafaring goodies. This venerable Balboa Peninsula seafood spot takes full advantage of the oyster’s inherent willingness to share mealtime real estate by whipping together their no-nonsense plate of Oysters & Clams on the Half-Shell. The plump, subtly sweet flavor of the clams provides the perfect counter to the oysters’ briny notes, giving the dish a nicely balanced quality that ultimately makes it irresistible. Plus, the little guys are naturally smaller than oysters, which makes them slightly charming in an odd sort of way. 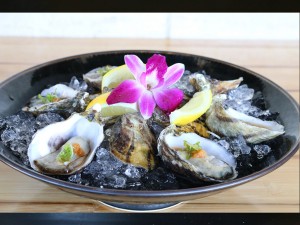 Sushi Roku
The Shigoku oyster was first developed in the Pacific Northwest in 2009. Seven years later, it’s become one of the most sought-after oyster varieties on the market. The Shigoku Oysters served up at this chic Fashion Island eatery brilliantly showcases why the relatively new shellfish are such highly slurpable bivalves. They’re accompanied by spicy ponzu, but all of their head-turning characteristics are still found at the forefront: clean, slightly sweet, and with a nuanced finish of cucumber and melon. 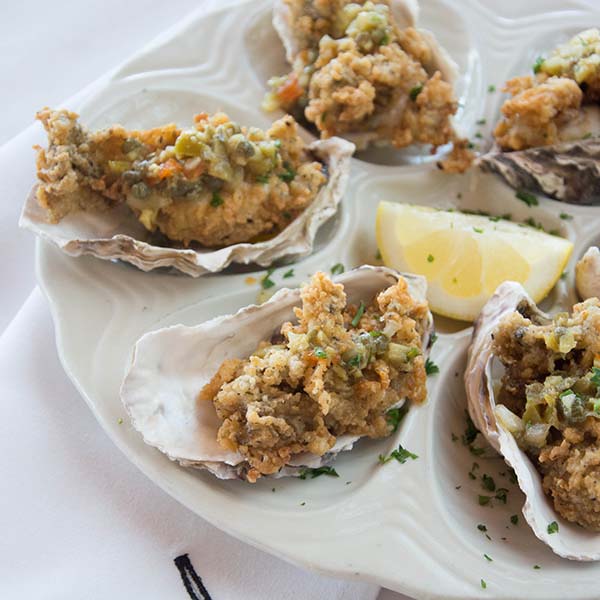 Gulfstream
Virtually everything tastes good when it’s deep fried, and oysters are no exception. This popular Corona del Mar venue/posh patio chill spot just doesn’t settle for good when their kitchen whips up a batch of Fried Oysters, which makes them an essential bite for any self-respecting oyster hunter. Armored with a crispy golden brown coat, these babies are accompanied by a “cowboy vinaigrette” that expertly supplements the level of brininess to ensure that critical flavor component doesn’t get buried by their substitute exoskeleton. It’s a thoughtfully composed bite that sets the right tone for a chic evening of epicurean shenanigans.

21 Oceanfront
Let’s face it: No seafood tower is complete if there isn’t a few oysters scattered about at least one of its icy troughs. Fortunately, you don’t have to fret about missing elements – oyster or otherwise – when you and your dining partner order the Seafood Tower for Two at this elegant fine Newport Pier-adjacent steak and seafood establishment. Here, the oysters co-star in a dazzling ensemble that includes prawns, salmon sashimi, seared ahi, lobster, and Alaskan king crab. Order this, and it’s solely on you if you feel something is amiss.