Consider the taco: simple, hand-held, and delicious. This dynamic food features a flattened circle made from flour or corn that’s charged with being the barrier between a burst of flavorful ingredients and your starched white shirt or knee-length board shorts. The taco’s versatility makes it ideal for Newport Beach’s on-the-go crowd, whether one is squeezing lunch in between meetings or en route to Balboa Peninsula’s boardwalk. As the following 11 options show, Newport Beach’s taco scene ideally matches the versatility of the tortilla-wrapped treat. You’ll find worthy bites in all kinds of eateries, with main ingredients that deftly showcase just how far the concept can be stretched. Just be sure to have a couple napkins handy – remember; tacos can get messy. 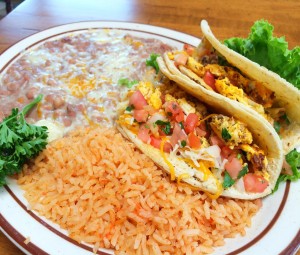 Avila’s El Ranchito
Who says you can’t start the day off with a taco? This Balboa Peninsula staple certainly won’t, as their Buenos Dias tacos are a fun take on the classic breakfast burrito. All of the essential ingredients can be found here – eggs, chorizo, cheese, and pico de gallo – while the accompanying rice and beans help round out a delectable meal. Although the restaurant is only open for breakfast on Saturdays and Sundays, don’t fret if you can’t wait to try these tacos – Avila’s serves them all day, every day.

Back Bay Bistro
This flagship restaurant amidst Newport Dunes has always felt like a getaway. This is especially true at lunch, when the combination of soft sunny weather and Newport Back Bay’s serene, boat-ensconced waters are the perfect antidote for a crummy morning. It’s a terrific setting for a taco, which is accentuated when you consider the exceptional quality of the bistro’s Baja Fish Taco. The excellence of these bites stems in part from Executive Chef Bruno Massuger’s commitment to locally sourced ingredients. Chances are, the grilled white fish, cabbage, avocado, and cilantro slaw found inside the corn tortillas were all culled from purveyors located less than 150 miles away. 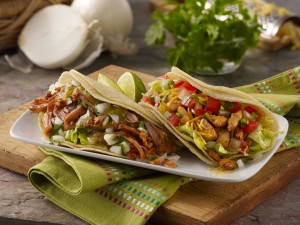 Chronic Tacos
The name of this popular taco chain was a ripe target for munchie jokes when Chronic Tacos hit the scene in 2001. However, its adherence to following recipes spanning three generations and unique assembly-line approach to taco creation are the reasons why this Balboa Peninsula venue is so habit-forming. Their pollo asado taco is a particularly perfect fit for Newport Beach, as the grilled marinated chicken that stuffs the shell provides patrons with a satisfying, somewhat health-conscious option. 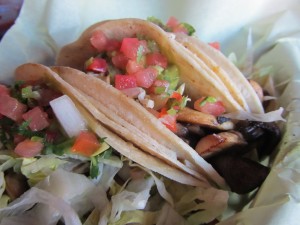 Great Mex
When visions of tacos dance in your head, chances are you picture them stuffed with some sort of protein. That snap judgment is precisely why the mushroom tacos at this laid-back Balboa Peninsula place are such a great revelation. There’s nothing too fancy about these tacos. Peek inside the flour or corn tortilla, and you’ll find grilled mushrooms, lettuce, guacamole, and pico de gallo. This simplicity allows the fungi’s wonderful earthiness to shine. It’s the perfect option for your next “meatless Monday.”

Picante Martin’s
It’s no secret that some of Orange County’s best tacos come from places that register little to no pretense. This cash-only, counter-service Balboa Island spot certainly falls into this category. The venue’s tiny dining space and bright orange walls make the place about as hole-in-the-wall as they come in Newport. This is the perfect setting to enjoy succulent al pastor tacos. Attempt to eat these bad boys the traditional hand-held way, but be forewarned: They are loaded with tender marinated pork along with an explosion of cheese, lettuce, and tomatoes. Have a fork ready just in case. 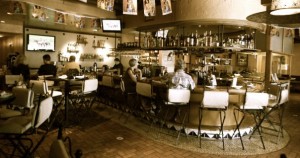 Taco Rosa
This Newport Hills Shopping Center restaurant serves Mexico City cuisine, so you’ll see plenty of regional dishes that you may not encounter at more casual Mexican eateries. This extra menu depth extends to their tacos, especially their alambre steak taco. This traditional taco, which gets its name from the Spanish word for “wire,” comes packed with ingredients that you may find on a shish kebab – think grilled steak, red onions, and peppers. The taco’s complex flavor profile is further enhanced by the addition of smoky bacon. Yep – bacon in a taco. Need we say more?

Las Fajitas
This Peninsula-based venue is known for filling up patrons with big burritos, generous platters and the kind of cheese-drenched combination plates that oftentimes serve as straight-up Southern California comfort food. Their delicious grilled salmon tacos prove that they’re not necessarily afraid to deviate from these expected classics. These lettuce and cheese-topped delights are typically tucked within the confines of a soft corn tortilla, but you can ask your server for a crisp shell if you want to add decadence. 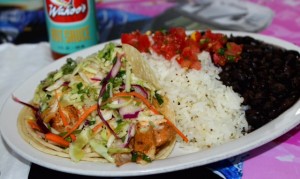 Wahoo’s Fish Tacos
Sometimes, a restaurant’s name says it all. Such a notion applies to this Newport Beach staple, whose Baja-inspired fish taco is one of the ultimate symbols of Orange County’s fast-casual culinary scene. The chain, which started in 1988 in nearby Costa Mesa, has come by its near-legendary status honestly, chiefly because its signature dish remains so simple. You’ll find nothing but perfectly grilled fish – either wahoo or mahi mahi – cabbage, and tomato inside your tortilla. Frankly, that’s all you need in order to achieve edible bliss. 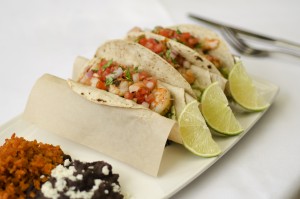 Red O
You’d expect that a restaurant tied to celebrity chef and Mexican cuisine impresario Rick Bayless to have some excellent tacos. The Fashion Island venue’s Mazatlan white shrimp tacos more than meet this expectation. There isn’t a whole lot to these tacos on the surface, which are available at lunch. They simply feature plump shrimp, marinated cabbage, and pico de gallo. Their basic nature makes sure each bite showcases the shrimp’s fresh, slightly sweet flavor. This is a textbook example of why the principle of less is more is oftentimes so vital in the kitchen.

Wild Taco
There’s an impressive pedigree behind this humble taqueria – the blokes behind popular Bear Flag Fish Market run it, and it’s located in Bear Flag’s original shack-like location near Lido Live. The restaurant delivers on the promise of its bones by infusing the Baja street taco concept with the kind of ingredient-driven quality that has given Bear Flag a cult following. Enjoy classics here, along with treats that display a bit of creativity, like the vibrant red snapper taco. Although the fish comes from the Gulf of Mexico, its fresh flavor burst will convince you it was hauled in straight from Dory Fleet. 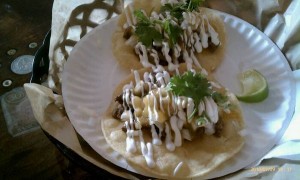 Sancho’s Tacos
The graffiti-tinged decorative nods to Dia de Los Muertos and hot-rod culture that festoon this Balboa Peninsula shack virtually demand that customers consume tacos. Their OG taco’s generous portion of tender tri-tip, fresh onions, cilantro, and sour cream would make for an impressive taco all its own. All of this goodness is further enhanced by a magical spicy yet sweet house-made substance, which they call Chubbie Sauce. How the sauce is made is a secret, but that only adds to the taco’s – and the restaurant’s – mystique.