Adding fish to your diet has proven to be beneficial to your health. Thankfully, Newport Beach is never short of fish dishes, being so close to the water. Whether you’re looking for something as quick and casual as a sandwich, or an elegant dinner date on the town, our fair city has an interesting fish dish for you. 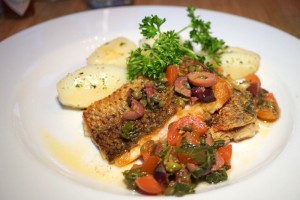 Whether you choose to sail to Newport Dunes Marina or drive to Back Bay Bistro, you’re sure to enjoy dinner and a marvelous view of the bay. The waterfront restaurant at Newport Dunes serves a variety of fish-focused items. Executive Chef Bruno Massuger prepares a casual blackened swordfish sandwich, indulgent panko-crusted Chilean sea bass, plus pan-seared branzino topped with a tomato, olive and caper relish. There’s plenty of parking, and Back Bay Bistro validates. 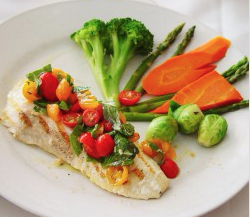 Barolo By The Sea 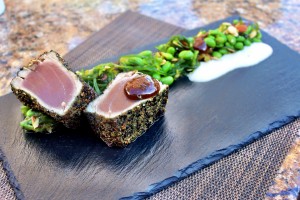 SHOR American Grill at Hyatt Regency Newport Beach has several fish offerings including an ahi tuna bowl and fish tacos on its lunch menu. For dinner, you’ll find a myriad of selections like halibut, salmon, bass, and trout. The true highlight just may be beautiful Asian-inspired ahi tuna dredged in Japanese furikake seasoning and seared to perfection before the fillet is finished with a black bean garlic sauce and horseradish mayo. 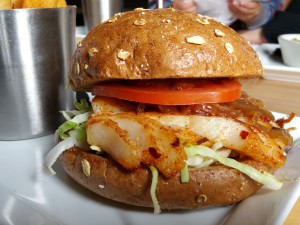 Parkstone Urban Kitchen, the fast casual concept from Utah, is new to Orange County. The branch across the street from the Newport Beach courthouse does not have a lot of seating, and it gets extremely busy around lunchtime. Parkstone features a variety of beer and burgers. However, pescatarians are not overlooked here. The fish sandwich consists of grilled, wild-caught rock cod dusted with a signature Cajun seasoning and topped with crunchy cabbage, tomato, grilled onions and a smoked jalapeño tartar sauce. Everything is cooked-to-order, which takes a while, but the fish is moist and fork-tender. 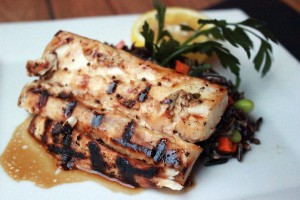 The Bungalow is nestled in the heart of Corona del Mar on PCH, just a stone’s throw from Fashion Island. This restaurant recently launched lunch service and diners may choose from fish tacos or grilled mahi-mahi marinated in wasabi soy vinaigrette and served over a cold wild rice salad. During dinner, a bigger selection is available including ahi poke or Greek-inspired grilled salmon salad to start. Expect a solid variety of fish entrees at The Bungalow: King salmon, swordfish, and ahi tuna. Miso-marinated Chilean sea bass is a customer favorite that’s served with coconut rice and a lemongrass ginger beurre blanc. 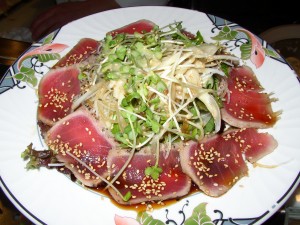 The old China Palace on PCH has revamped itself into a contemporary restaurant and lounge. CP, as it is currently known, is a one-stop-spot for a night out on the town. Start with dinner in the dining room, and then move into a lounge that transforms into a nightclub after hours. Your meal may begin with a handful of selections from the sushi menu. Fish entrees from the Chinese section consist of grilled salmon with miso, crispy white fish in a lemongrass citrus sauce, as well as grilled Chilean sea bass are featured. 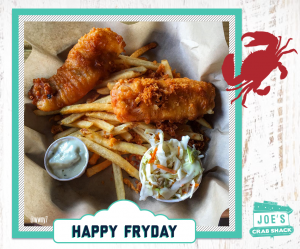 This Texas chain opened its doors in 1991 and now Joe’s Crab Shack is all across the country. In Newport Beach, the casual eatery sits on Mariner’s Mile where diners receive bibs to protect their clothing while they dig into buckets of seafood with their fingers. The fish and chips is a Samuel Adams beer-battered white fish served in a basket along with crispy French fries. If you’re looking for healthier options, choose the roasted cedar plank salmon, or mahi-mahi kabobs. Joe’s Crab Shack is probably one of the few places in OC you’ll find redfish, a fish variety widely abundant in the South. 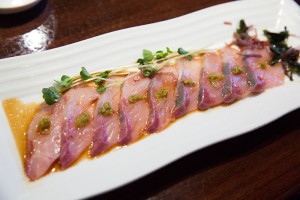 Don’t let this small, humble strip mall restaurant fool you. Nana San is an authentic Japanese restaurant on the corner of Jamboree & Bristol N. They offer a solid menu, as well as an omakase experience at the sushi bar that allows the sushi chefs to create a dining experience for you. Naturally, raw fish is the star here. However, stellar fish preparations including broiled Chilean miso sea bass with pumpkin mashed potatoes, broiled marinated black cod, and deep-fried flounder are also available. 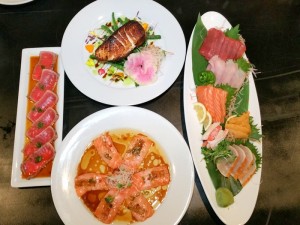 Sushi Dave is synonymous with OC sushi, and if you’re dining at TEN, you’ll probably see him behind the counter. This Asian fusion restaurant, off MacArthur Boulevard by Bosscat, has seen several changes through the years, but it has thrived in this current incarnation under the direction of Dave Fernandez. TEN’s endless fish selection will make pescatarians go into overdrive. Start with tuna tataki salad, before moving on to entrees such as soy butter Scottish salmon or miso roasted Chilean. Want sushi? Well, there is an abundance of that here, as well as sashimi. Fragrant halibut sea salt and yellowtail jalapeno sashimi are house favorites. 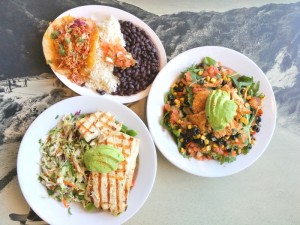 Wing Lam and his brothers founded Wahoo’s Fish Taco in 1988 to bring together their love of food and surf. The restaurant chain now stretches across the U.S. with 60+ locations, and another in Japan. Wahoo’s menu fuses flavors of Asia, Mexico and Asia under one roof. The Newport Beach location sits at Fashion Island and serves up fast, fresh and healthy food to shoppers and nearby office workers. Add fish such as salmon, mahi-mahi, and the restaurant’s namesake wahoo to tacos, salads, Paleo bowls, and burritos.