Winter calls for comfort. Rarely can you find bowls more soothing than when they’re filled with clam chowder or chili. Thankfully Newport Beach has plenty of both. Bonus: February 25 is National Clam Chowder Day and February 27 is National Chili Day. Learn about 10 of your best bets, and be sure to grab a big spoon. You’ll need it. 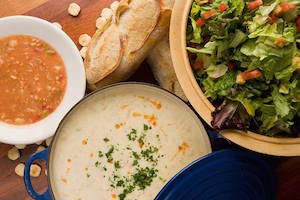 Since 1996, this Cannery Village restaurant with the neon blue marlin sign and prodigious patio has dispensed bay views and two varieties of clam chowder to diners. This chowder twosome features cups and bowls of both New England (milk or cream based) and Manhattan (tomato based) chowders. The only thing missing is Rhode Island-style chowder, which pours clear. Really, though, most chowder fans win with two styles. 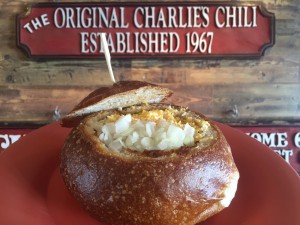 This popular casual restaurant near Newport Pier dates to 1967 and the Farman family continues to feature chili in many forms throughout the day. Grab a chili cheese omelette, chili cheese fries, or chili dog. On Wednesdays, you can score bottomless chili with garlic toast, cornbread or French fries for a reasonable $9.99. Charlie’s Chili even sells gallon tubs to go for parties. Longtime cook Jose Castillo has been making chili for the past three decades. The original beef-based chili incorporates old pots of coffee instead of water, to boost flavor. They also have a vegetarian chili with black beans, kidney beans, pinto beans, mushrooms, tomatoes, and onions. 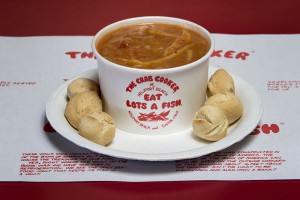 Bob Roubian founded this fish market and restaurant with a red, white and green color scheme in 1951 on Balboa Peninsula’s bend, which later spawned a Tustin spinoff. Their beloved clam chowder sports a tomato base and contains clams, vegetables, and spices. According to family member David Bolton, “Any more than that is a military secret.” 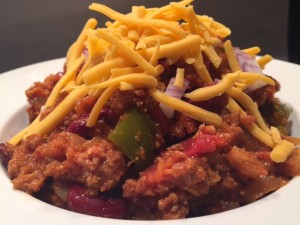 This comfort food emporium from Rand McDevitt and business partner Tina Voso debuted in 1989 is still going strong in Newport North Shopping Center. People pile into a comfortable booth or patio table for healthy but hearty food, including turkey chili. For over 25 years, they’ve been stewing ground turkey in a tomato-based sauce with kidney beans, onions, and green bell peppers. Each order of turkey chili comes with shredded Cheddar cheese, finely diced red onions, and a piece of crusty baguette. 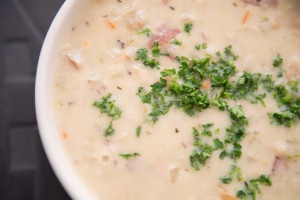 The Fashion Island outpost of this Beverly Hills born chain features over 250 items on their menu. Friday’s soup of the day is clam chowder, a stick-to-your ribs concoction with clams, heavy cream, potatoes, carrots, and onions that’s seasoned with salt and pepper. The Cheesecake Factory serves this soup a la carte, meaning you may want to supplement for a fuller meal. Perhaps consider a famed slab of cheesecake? 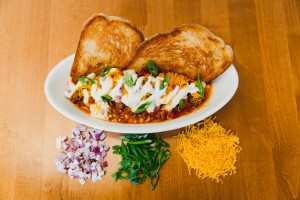 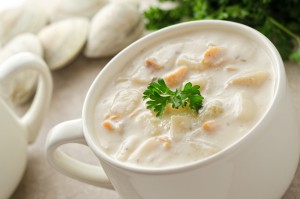 This waterfront restaurant provides diners with prized views of the marina and passing Balboa Ferry. Since Newport Landing is right on the water, don’t be surprised to learn seafood is the focus, and that they serve a serious bowl of clam chowder. Clams and clam juice join the fray, as does roux, bay leaves, thyme, potatoes, celery, onions, carrots, white pepper and fresh garlic. This zesty clam chowder draws people to the landing. 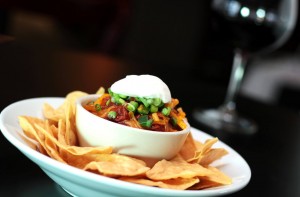 Buttermilk fried chicken may be the most popular dish at Christine Overstreet’s restaurant located in Cannery Village, but many people also make room for The Porch’s signature chili. Whether you order a small bowl or full entrée, all-beef chili comes with grated Cheddar, green onions, sour cream, and tortilla chips for dipping’s sake.

This Newport Beach institution dates to 1912. The party continues nightly under the direction of owner Steve Lewis and son/business partner Scott Lewis. The Blue Beet is perhaps best known for hosting live blues, jazz and rock music as people move to the beat. However, don’t sleep on the food, which has mass appeal, including New England style clam chowder by the cup or bowl. 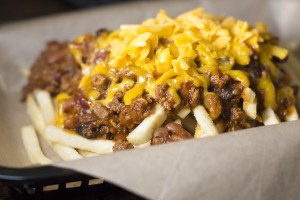 On the Balboa Peninsula, Jared Jones and business partner Mac Carlson cater to “rustic surfer style” at The Beach Barrel, a restaurant replete with reclaimed wood and hearty food that girds surfers against the formidable waves they’ll face later in the day. The restaurant’s chorizo chili features Ochoa’s lean chorizo made in nearby Santa Ana, a blend of secret spices, and a bean trio: kidney, black, and pinto. Chili is available on cheese fries, the Barrel burger, on a cheese dog, or in a solitary bowl.