The air is crisp and the temperatures have calmed down. The clocks have been pushed back to reveal skies that grow pitch black before the end of your evening commute. Preparation for various holidays has begun in earnest. Autumn has indeed arrived; considering the heat that boiled Newport Beach over the past few months, this season’s arrival couldn’t have come soon enough.

From a culinary standpoint, there’s nothing that quite embraces the elements of fall like a bowl of soup. It works so well within the season’s parameters because it carries such a broad definition. A soup that is congealed with thickness and stuffed with protein warms the soul in a wildly different way than a soup that is primarily a delicate, near-translucent broth. Somehow, both styles manage to scratch the same itch that begins to emerge once daytime temperatures stop reaching 80 degrees.

There are plenty of places to find comforting soup in Newport Beach. Much like the Newport Beach dining scene itself, these soothing bowls are eclectic in their nature. Their differences make them all the more intriguing to try, especially since the best time of the year to indulge in their goodness is at hand.

Newport Landing
Artichokes are a sneaky good vegetable. Sure, they’re a little unorthodox to eat, but once you separate the flesh of the veggie from its base, it earthiness is quite remarkable. Artichoke certainly makes for a wonderful counterpoint to crabmeat’s inherent sweetness, which is why the Crab and Artichoke Bisque at this venerable Balboa Peninsula establishment works so well. The yin and yang between the two main ingredients creates a soup equipped with a fully balanced flavor profile. If you’re a bit wary of eating artichokes on their own, this is definitely a great way to reap their tasty benefits. 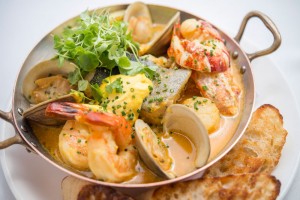 The Cannery
If you’re so close to Newport Harbor that some of your patrons arrive by boat, your seafood dishes better deliver the goods. Meeting up to this expectation has never been a problem for The Cannery, and Jack’s Bouillabaisse is definitely proof of that. While the venue’s take of the classic French soup doesn’t bear the name of Executive Chef Nicolas Weber, he makes the dish special by allowing fresh lobster, cod, clams, shrimp, and scallops to interplay with flavorful tomato saffron broth. This is an elegant, sumptuous entrée to enjoy regardless of what vessel you use to get to the eatery.

Pacific Whey Café
The mantra of this cozy Newport Hills joint is simple: “We Cook.” This simple philosophy extrapolates into house-made items that incorporate quality ingredients and a smidge of that universal secret ingredient, love. Both factors feature prominently in their spicy, smoky Tomato & Pepper Bisque. The soup’s thick, sweet cream-infused tomato puree is augmented with chopped fire-roasted tomatoes, strips of red pepper, and chipotle, providing each crock with a sense of warmth and just the right amount of inner coziness on a chilly day.

Lotus Bistro
For a lot of people, pho is Vietnamese comfort food. As a result, some may just assume that it can never be fancy. This mindset is what makes the Filet Mignon Pho served at this unassuming venue off Old Newport Boulevard such a reveal. The presence of tender meat adds a subtle upscale quality that permeates the dish’s rice noodles, herbs, and savory broth without changing the dish’s expected vibe. In a way, it’s the ideal interpretation of pho as filtered through Newport Beach’s luxe sensibilities. 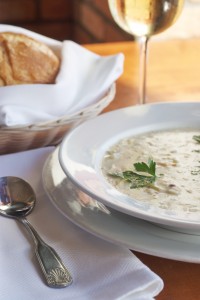 Fly N Fish Oyster Bar & Grill
The Newport Beach Boardwalk may not be a place that comes to mind as readily during the off-season as it does during summer. Yet Executive Chef Julio Hawkins’ decadent take on New England Clam Chowder is good enough to lure you to this section of town regardless of the weather. The soup is creamy to the point of being drinkable, and the generous chunks of fresh clams, potatoes, and leeks that are loaded in this base provide the perfect amount of textural complexity. Better yet, the restaurant’s compact, exposed-brick interior provides an appropriate setting for eating clam chowder this luscious.

Trattoria Mediterranean Cuisine
You may be surprised to find Baked French Onion Soup being served at this Balboa Island restaurant, especially since it has “trattoria” and “Mediterranean” in its moniker. However, it actually makes sense that this soup is on the menu. Despite its name, the dish’s origins trace back to the Roman Empire. All historic-fueled semantics aside, this hearty delight earns its spot on the menu – and on your bill of fare – for being properly made and immensely flavorful. From the richness of the broth to the gooeyness of the Swiss cheese, Trattoria’s French onion soup offers perfect little bites to fuel your island visit.

Rusty Pelican
A Southern-inspired soup may seem a bit odd coming from a restaurant that overlooks a watery outlet of the Pacific Ocean. Yet one bite of the Carolina Crab Bisque put forth by this Mariner’s Mile staple erases any doubt as to whether or not it belongs. This venue’s version of South Carolina she-crab soup is rich, creamy, and chock full of crab meat and walks the fine line between being too smooth and too chunky, resulting in a deeply satisfying soup, especially while gazing out at Newport Harbor’s waters. 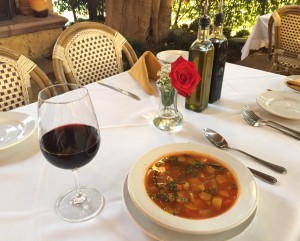 Sapori Ristorante
Since he opened Sapori in 1989, Owner/Executive Chef Sal Maniaci has been making some of Newport Beach’s finest Italian cuisine, in large part because he’s a firm believer in simplicity and freshness. These beliefs are on full display through his Minestrone Soup. There are no frills to this simple bowl of vegetable soup, nor are they needed. Anything extra would distract from the natural flavors that stem from the abundance of seasonal, fresh veggies that Maniaci places in each bowl, which sets the tone for an evening of Italian epicurean bliss.

Ten Asian Bistro
This sleek venue/nightclub near John Wayne Airport is famed for its sushi rolls and its ability to help people get their groove on. Yet the menu yields plenty of delights that go beyond the realm of raw fish. Case in point: their winning version of the classic Hot and Sour Soup. Their recipe swaps out the protein that is traditionally found in the soup with silken tofu, yet don’t let this switch deter you. The tofu absorbs the complex notes of the soup’s chicken broth, egg, and shiitake mushrooms, thus providing an intense concentration of flavors every time you take a bite of the soft substance. This soup is a terrific option even if you have no intention of dancing the night away.

Alta Coffee
Tucked in a narrow neighborhood near Balboa Peninsula’s Lido Isle, this former bookstore turned cozy, intimate café has long been sanctuary for people that seek refuge from the corporatized interpretation of a coffeehouse. The place is also known for serving up hearty bites, and nothing fits this bill quite like their bean and veggie-loaded Zuni Stew. This vegetarian delight is blended with Southwestern chilies and topped with cilantro and cheese, the ideal edible to enjoy whilst sitting on their heated patio and philosophizing with friends, just as you should in an old-school coffeehouse.