It doesn’t matter how old you are. Who doesn’t love a good slice of pizza? Some of the best and most authentic pizzas can be found in Newport Beach, including some versions that are certified Vera Pizza Napoletana. Learn about these 10 pizzas that can be found in different neighborhoods throughout town and listed in alphabetical order. 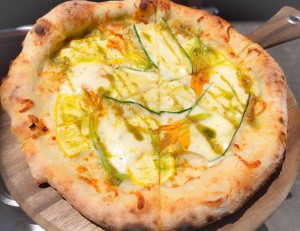 Chef de Cuisine Brent Omeste proudly offers a range of pizzas on the menu from the traditional Margherita, Bianca and Pepperoni, to seasonal pizzas, which rotate every two to three months. A sourdough starter gives the crust a unique flavor, and by producing wetter dough, the pizza is able to cook at a higher temperature and form the desired leopard spots on the crust. The Summer Squash Pizza ($14) is a perfect seasonal choice. It is nice and light with a slight tang from the Crescenza cheese and opal basil pesto. A dusting of fennel pollen adds brightness and another element of flavor to the pie. 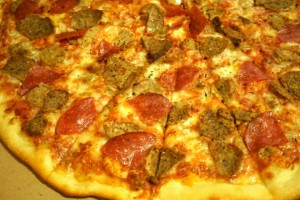 Owner Johnny Younesi, a New Yorker who moved to California as a teenager, opened his first pizza shop in Corona del Mar, and added a second location in Newport Beach. What makes Johnny’s pizzas different? Younesi has installed a special water filtration system that replicates New York’s soft water, helping to create the perfect dough. The pizzeria also uses original recipes from New York, which were being made in Sicily two generations ago. Johnny’s makes its dough, sauce and meatballs fresh daily. There are many specialty pizzas as well as build your own, but it is the Andolini – Johnny’s favorite – that is a sure winner! This meat lover’s specialty is topped with house-made meatballs, Genoa salami, sweet Italian sausage, fresh herbs, mozzarella and tomato sauce. 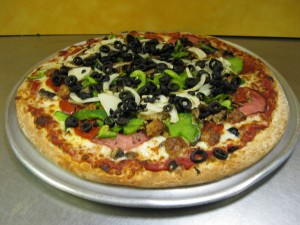 This Newport Beach institution started with the concept of giving everyone great pizza at wholesale prices. Two decades later, its original vision continues, but has grown to become so much more. The spot attracts the late night crowd, mostly those looking for something to eat after an evening of pub-crawling. However, it is still the low prices that draw people. Want a gluten-free pizza? Laventina’s fulfills that easily as well. A large cheese pizza will set you back less than $10. Opt for five or more topping for a few bucks more to really stave off those late night hunger pangs! 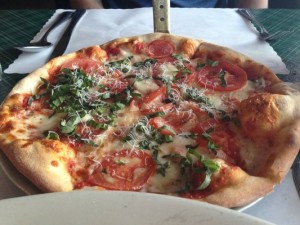 Besides its excellent customer service, this family-style Italian restaurant continues to draw in crowds every single day with its hearty and tasty food. Keith Davidson (Mama D’s son) owns this decade-long business in Newport Beach, with the original Manhattan Beach location dating to 1991. Mama D’s prides itself in welcoming diners like you would invite friends into your home. Specialty pizzas include the traditional Margherita, but you are encouraged to build your own pie from a list of available toppings, all created in traditional, thin-crust Neapolitan style. 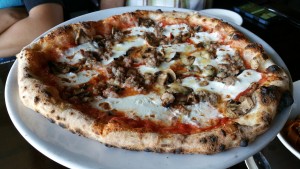 The charming and vivacious Alessandro Pirozzi is no stranger to the Orange County dining scene. His latest restaurant, aptly named Pirozzi Corona Del Mar, features a VPN-certified wood burning oven meticulously handcrafted by artisans in Naples, and imported especially for the restaurant. His authentic Naples-style pizzas cook in the 900-degree wood-burning oven that feeds on olive wood in less than a minute. More than 10 options are available on the menu. Start with the Margherita, a traditional favorite that pays true homage to Alessandro’s hometown of Naples, which is simple, perfectly blistered, and topped with the freshest of ingredients. 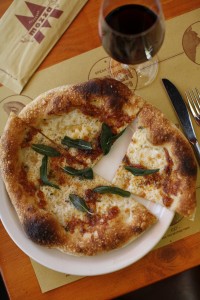 The collaboration between three notable figures in the culinary world – Mario Batalli, Joe Bastianich, and Los Angeles bread maven Nancy Silverton – sits alone on a stretch of PCH surrounded by luxury car dealers. The trio opened the Newport Beach location following the success of Pizzeria Mozza in L.A. The décor is almost identical to its Southern California counterpart, as well as its legendary wood-burning pizzas, especially the version topped with house-made fennel sausage, fennel, red onions and scallions with a smear of cream. 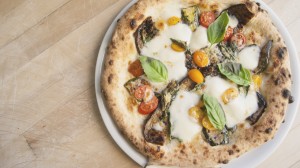 Pizzeria Sapori owner Sal Maniaci is no stranger to Newport Beach. His Sapori Ristorante, which sits next door to the pizzeria, has been a Newport Beach staple for 25 years. He has taken his Italian roots a step further with the pizzeria featuring Italian Neapolitan-style pizzas baked in a wood-fired oven imported from Naples. What sets these pizzas apart is the science behind the pizza dough. The “mother” dough from a strain of yeast dating back 80 years allows it to mature for 72 hours. The result is a crust that is soft yet crispy, thin but slightly chewy. Try the house signature Sapori ($19), a vegetarian offering topped with homemade mozzarella, grilled eggplant and zucchini, grape tomatoes, pecorino romano cheese and extra virgin olive oil. 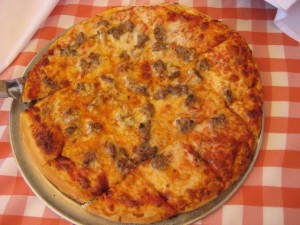 The Lido Shipyard Sausage Company, a long-time Newport Beach resident located on Lido Peninsula, offers Italian cuisine with recipes dating back 150 years to Sicily. The bustling restaurant is waterfront-adjacent, hence highly desirable patio seating. However, it is the coveted captain’s chairs tucked away in the back you’ll want for a quiet romantic evening out. Owner Peter O. Sabatino’s family developed the signature sausage back in 1864 and brought the recipe to the US in the 1930s. The secret recipe blends the sausages with a special goat milk cheese from Sicily. It is a no-brainer that when you order a pizza pie here, you top it with the restaurant’s signature sausage. 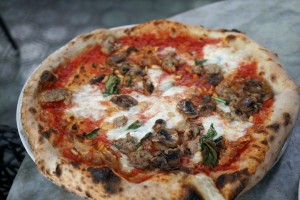 This Newport Coast Napoletana-style pizzeria offers diners the feel of dining in a small Italian village. In the evenings, vintage Italian films project on a back wall over leather lounges – think upscale “Cinema Paradiso” – as well as a row of living olive trees and a floor-to-ceiling wine wall. The Vera Pizza Neapolitan-certified imported copper oven reaches 1000 degrees and cooks the pizzas in about one minute, creating a true soft and foldable Neapolitan pizza with tell-tale blackened char spots on the crust from a blistering hot, wood-burning oven. All the ingredients are flown from Italy, in keeping with authenticity. Try its namesake pizza ($18) with crushed tomatoes, pancetta, wood-oven sausage, roasted mushrooms, toasted pine nuts, mozzarella, basil, and extra virgin olive oil 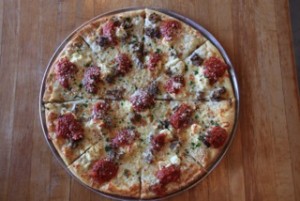 The Original Sgt. Pepperoni’s Pizza Store is a Newport Beach institution that reopened its doors in 2014 after a seven-day renovation and remodel. New owners are Newport Beach natives Jeff Roberts, Andy Hong, Rob Dodman and most notably, Stan Frazier, the founding member and drummer of the band Sugar Ray. Their slogan, “spreading love through pizza since 1976,” continues today with a secret dough recipe. Each pizza is hand-tossed and made-to-order. The large Meatball Ricotta Pie ($21) is generously topped with Frazier’s famous house-made meatballs, fresh ricotta cheese and tomato sauce, garnished with Parmesan and parsley.