Julia Child once said, “People who love to eat are the best people,” and she would have been 104 this month. To that end, one of the surest signs of a person being a legend is when they are honored on their birthday even though they no longer grace the earth.

It’s a birthday that deserves and practically demands annual recognition. Without Julia and her pioneering work on television, foodie culture as we know it would arguably cease to exist. But her legacy isn’t merely contained to her presence on the small screen. She made it okay for us Americans to set aside our burgers and baked potatoes and embrace the joys of French cooking; a grasp so tight, we often take for granted that some of our favorite things to enjoy were also hers.

This list celebrates some of Julia’s iconic dishes that thrive in the Newport Beach culinary community, and her spirit touches each of these items shared here.

Part of Julia’s gift in bringing French cuisine to the American masses was her ability to showcase flavor familiarity with the context of seemingly exotic dishes. It’s a motif this unassuming Balboa Island bistro upholds through their sumptuous take on Bouillabaisse. This hearty saffron seafood stew is chock full of baby veggies, fresh herbs, and fennel, which combine a complex flavor profile that tantalizes taste buds in ways that are quite accessible. It’s the kind of dish you’ll crave after spending a blustery afternoon on the city’s tiny isle.

Some of Julia’s most revered dishes weren’t necessarily bound by French borders. For instance, her roast rack of lamb recipe (or Carre d’agnaeu, if you wish to use the French term) looks like it could have originated here instead of the Old Country. This Newport Harbor-adjacent venue demonstrates this crossover rather well with their Oven Roasted Rack of Lamb. You may not even be aware of the dish’s French inspiration when you dig into the dish, which features lamb accompanied by Yukon gold mashed potatoes, seasonal veggies, and a grain mustard port wine sauce. That’s perfectly fine, of course – it’s a killer entree regardless of its roots.

Coq au Vin was Julia’s calling card on her legendary PBS show. The dish is so associated with her genius, in fact, that if you’re going to have the moxie to put it on your menu, you better do right by her. Not only does this quaint bistro in the city’s hidden Eastbluff neighborhood nail it, the venue brought its own hammers. They also brought their own unique touch, acknowledging their love of Italian fare by incorporating pappardelle pasta to accompany the dish’s traditional ingredients of chicken and Burgundy wine. We’re thinking Julia would be impressed.

We sometimes get the impression that the French fare that Julia loved was a complex melange of heavy sauces and fancy techniques. Yet some of the best items that hail from France are ones that lean toward the rustic and simple. The excellent French Onion Soup Grantinee from this venerable Corona Del Mar venue demonstrates this rather well. It’s an uncomplicated version of the classic second course delight, with only a slice of crostini being added to help you soak in its earthy, gooey goodness. This eschewing of fanciness is the very thing that makes it taste so regal. 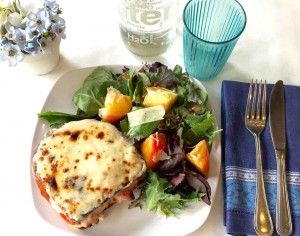 In French cuisine, some of the simplest dishes can also be the most decadent. The Croque Monsieur served up at this lovely Fashion Island venue perfectly demonstrates this axiom. After all, this devilish delight is a ham sandwich at its core, paired with tomatoes, provencal herb, and mustard. It also happens to be slathered in bechamel cheese, making it almost look like something you should feel guilty about eating afterward. But the only reason you should feel guilty after ordering this item is if you don’t finish it in one setting.

One of the beautiful things about French cuisine is how it can add complex elements to basic culinary concepts without altering its simplicity. If you want proof of this, swing by this Balboa Peninsula staple for lunch and order their Chopped Nicoise Salad. This is a “kitchen sink” salad in keeping with the classic French tradition – rare ahi tuna is surrounded by Bibb lettuce, haricot vert, hard boiled egg, caper, tomato, fingerling potato, olives, and pickled peppers, all topped with a lemon vinaigrette. Yet these flavors don’t overwhelm the senses; instead, they create a delectable harmony as sublime as the adjacent Newport Harbor’s waters. 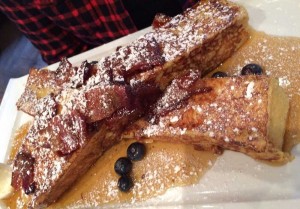 There is something decidedly French about a good brunch. After all, this dangerous liaison between breakfast and lunch should be marked by the pleasure-packed enjoyment of exquisite food and beverage and unbound by the constraints of time. To that end, the thick, sweet GM Brioche French Toast served at this Fashion Island venue effortlessly coaxes you sit down, relax, and dine as if you don’t have a care in the world. Which you don’t, because you’re eating exceptional French toast covered with hardwood smoked bacon maple syrup.

Steamed mussels are the quintessential French seafood dish, largely because of its simplicity. Jacques de Quillen, owner/chef of this relentlessly charming French bistro on Balboa Peninsula honors this by crafting a dish worthy of Brittany. The moules that are found in Chef Jacque’s Prince Edward Island Black Mussels Mariniere may not hail from the famed French harvesting village, but the plump, flavorful bivalves are expertly surrounded by the nuanced flavors that shallots, white wine, and garlic classically bring. If you can’t make it to the coast of Northwest France any time soon, this venue and this dish will certainly pacify.

It’s no secret that France has a history of decadence. While Moulin Rouge was sacred, it wasn’t exactly a holy place. So it make sense that the country would be home to some of the richest desserts on the planet. This sleek Corona Del Mar restaurant and music venue nicely taps into France’s indulgent side with their Chocolate Mousse Cloud. This creamy, whipped cream-topped delight shows off its naughty side by coming to you in a martini glass, and its sinful flavor doesn’t stop transgressing until the last bite. Julia would be proud – not to mention Lady Marmalade..

Without Julia, we may not have embraced French chefs as readily as we do. We shudder at this thought, if only because we know Newport Beach is home to this waterfront eatery co-owned by renowned Chef/Partner Yvon Goetz. But he’s here, and his venue is home to a pitch perfect take on an all-time classic French dessert. The simple appearance of the Tahitian Vanilla Bean Creme Brulee served here is underscored by nuanced flavors, as its accompaniment of berries and chocolate fleur de sel cookie provides calculated bursts of multi-dimensional sweetness. If you’re looking to honor Julia through the enjoyment of French cuisine, this dish is certainly a brilliant way to honor a brilliant woman.