At times during this busy season, Christmas spirit is best found within a glass. A nip of a seasonal beverage – or, at least a drink whose tastes evoke the pleasures of the season – can oftentimes be the impetus needed to lift us up during stretches of holiday-fueled stress. These drinks can do this not just because they taste good; their flavors can often bring back the happy memories needed to make us feel good.

As you run around Newport Beach to make sure 2015’s last couple weeks are punctuated with an exclamation point, you’ll have no shortage of spots around town to enjoy these kinds of vibe-evoking drinks. Whether you encounter traditional seasonal drinks or beverages brimming with warm, cozy flavors, enjoying their goodness will undoubtedly bring you tidings of good cheer.

Aqua Lounge
It may not snow in Newport Beach, but December still brings other harsh wintry elements around here. The combination of cold coastal temperatures and gusty winds can still chill hearty bones, to the point where a nice stiff drink is necessary. That’s why the Boulavardier made in the Island Hotel’s relentlessly sleek lounge is such an essential wintertime libation. This classic cocktail is made from equal parts bourbon, Campari, and vermouth and is about as burly of a drink as you can enjoy. Robust, insides-warming pop balances a simple elegance that works rather well with the surroundings. This drink will not only thaw you out – it will make you look sophisticated. 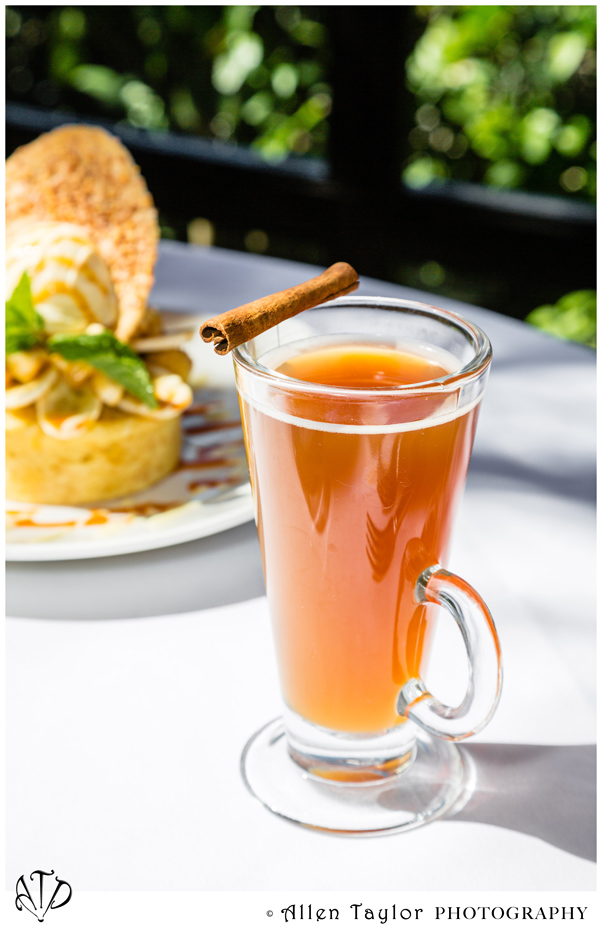 Bayside Restaurant
An apple cider worthy of the holidays should warm up your insides and strike an ideal balance between spicy, tangy, and sweet on the palate. Otherwise, you might as well be drinking apple juice. You certainly won’t have to worry about getting stuck with juice when you sidle up to this Newport Back Bay mainstay and order a glass of Warm Spiked Cider. All of the sensations that make holiday cider worthwhile are present and accounted for, as an apple cider base joins cinnamon, oranges, lemons, and cloves to create flavorful complexity. The drink’s spike comes from dark rum, which further amplifies the beverage’s stunning qualities. This cider is a pretty fantastic way to make merry.

The Crow Bar and Kitchen
Long before the White Russian became part of The Big Lebowski’s lore, this drink was known as a mighty fine adult libation. Thanks to the popular Corona Del Mar gastropub, it’s also the inspiration for a killer season-appropriate cocktail. Dubbed the Spiced Russian, this beverage uses Kahlua pumpkin spice in place of the White Russian’s traditional Kahlua in order to deliver the appropriate holiday jazziness. Add some crème and Tito’s Handmade Vodka into the mix, and you have a timely drink that The Dude would absolutely abide by. 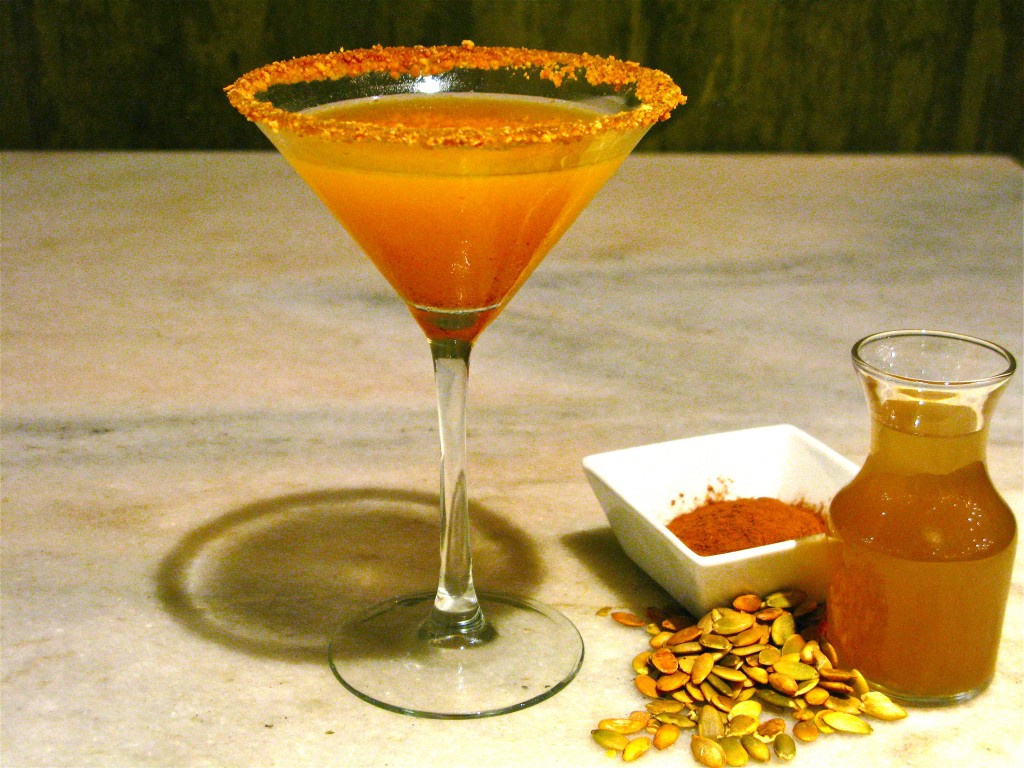 Fig & Olive
It’s fairly obvious that pumpkin-flavored beer has become an indelible seasonal staple. While they may be fun to drink, the Pumpkin Spice Martini that this Fashion Island venue whips up elevates the gourd to a level of sexiness rarely if ever achieved by a brew. The libation is certainly sensuous. Apple brandy, spiced pumpkin butter, fresh lime juice, and ginger enhance a base of house infused vodka. Add a generous dusting of Graham cracker to the rim, and you have a drink that is simultaneously autumnal and mirthful, just like the season itself. 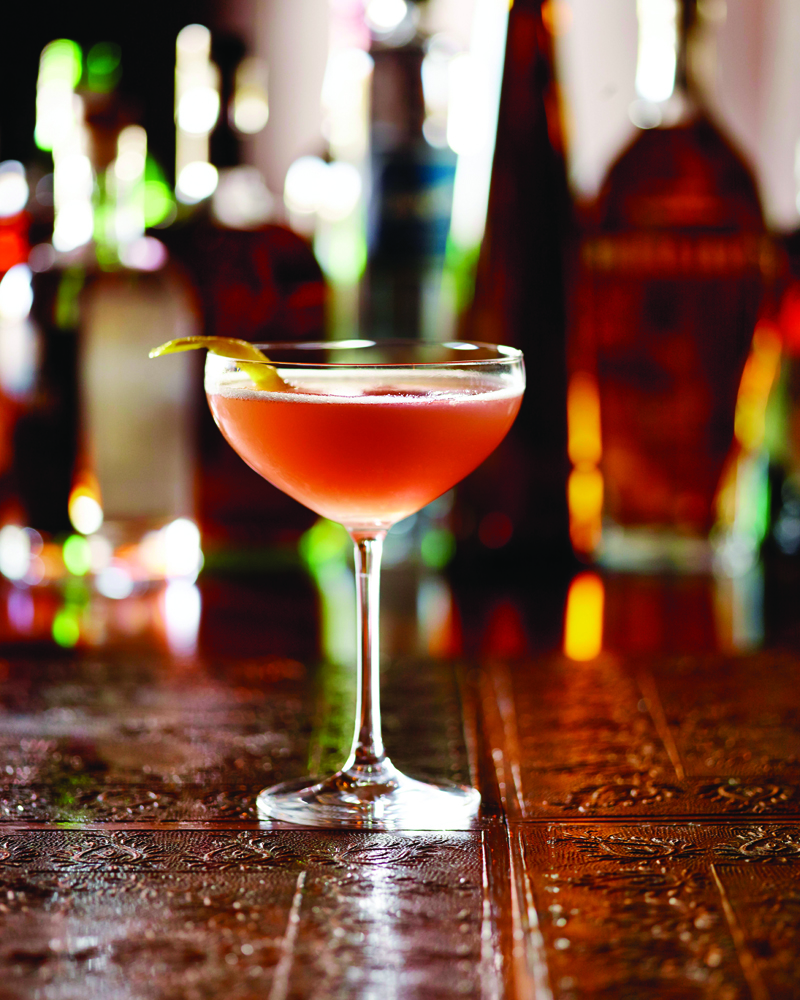 Fleming’s Prime Steakhouse & Wine Bar
Sometimes, you just need a pretty cocktail to get through the seemingly perpetual bustle of shopping, entertaining, and year-end business deadlines. To that end, all you need to do is claim a seat at the bar of this venerable Fashion Island steakhouse and order a Ward 8. The drink combines Maker’s Mark bourbon, pomegranate, and violets to give the libation a soft, blush-like hue that virtually sighs within the glass. This concoction isn’t just a looker. The drink is infused with vanilla and clove and carries complex, subtly sweet warmth that will slow down the season’s onslaught, if only for an hour or two. 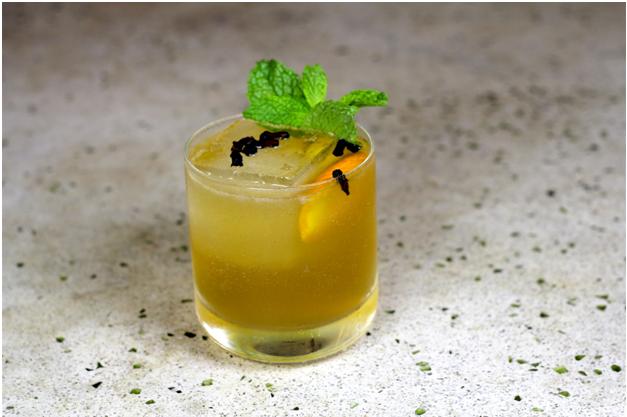 Great Maple
The holidays are a great time for stories, so it only seems appropriate to enjoy a warm, hearty cocktail that has a narrative hanging from its rim. This Fashion Island venue has a tale to tell, in the form of the N.S. Wolfhound. The drink’s story starts with an Irish bartender with the initials N.S., who one night crafted the drink while working behind the restaurant’s bar. In her skillful hands, she dressed up a base of Tullamore Dew Whiskey with vanilla, Cointreau Noir, Meyer lemon, and clove syrup. She then centered the beverage with a block of ice topped with fired cloves, putting a finishing touch on a drink that hits on a wide range of notes, from smoky and sweet to warm and slightly tart. It’s a delicious tale – one that nearly demands a sequel. 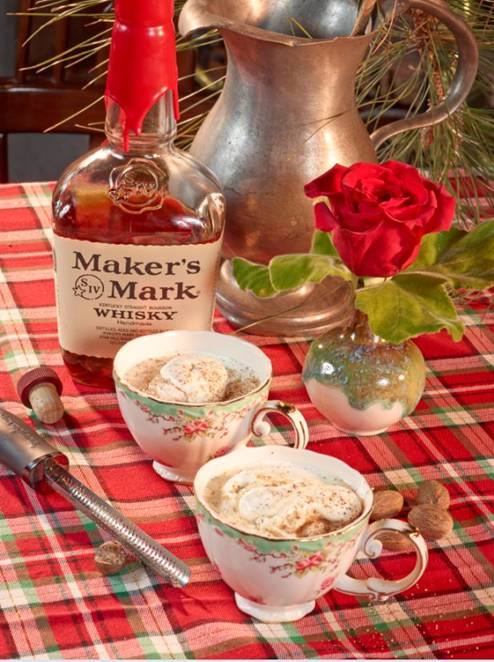 Muldoon’s Irish Pub
No drink is more closely associated with the holidays than egg nog. Well, other than mulled wine. It’s a debatable subject, really. So it’s a good thing that Newport Beach’s classic Irish pub has long been the go-to local place for people to order both drinks and determine which libation truly has the upper hand. Ultimately, it doesn’t matter what your position is on this argument. As long as you’re enjoying Muldoon’s perfectly spicy Wassail mulled wine or their incredibly rich Bog Nog egg nog concoction, you’re on the winning side.

Newport Beach Brewing Company
Okay, so pumpkin flavored beer isn’t the sexiest beverage you can enjoy. But it’s one of the most satisfying libations you can have, as its explosive popularity in recent years demonstrate. If you have a hankering for a hint of seasonal gourd in your brew, you’d do well to hit up this popular Balboa Peninsula joint and wrap your mittens around a glass of brewmaster Derek Bougie’s Daft Punkin. Simplicity makes this beer shine, as the medium-bodied ale is made with real pumpkin and spices. Plus, at just 6% ABV, you won’t have to worry about one brew making you too happy.

Port Restaurant & Bar
Coffee seems to taste better during the holidays, provided that it’s not drunk solely to inject caffeine into your slumbering veins. This is certainly the case when you add a smidge of alcohol into your brew; a maneuver that’s a bit of a specialty at this semi-hidden Corona Del Mar gem. While the restaurant offers a half-dozen variations of liquored-up java on their nightly dinner menu, their Brandy infused French Coffee feels particularly in tune with the mirth of the season. This is coffee the way it should be enjoyed. 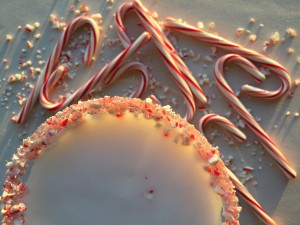 The Winery Restaurant & Wine Bar
Is there any holiday treat that sings to our proverbial inner children more than the candy cane? We don’t think so, which is why the Candy Cane Martini being poured at this Mariner’s Mile establishment is so fun to order. The beverage consists of vanilla vodka, white chocolate liqueur, and crème de menthe and perfectly evokes the distinct taste of the iconic hook-shaped delight. Plus, the rim is coated with simple syrup and crushed candy canes, which furthers its flavor flashback. This martini is enough to make the Scroogiest of Ebeneezers completely giddy. 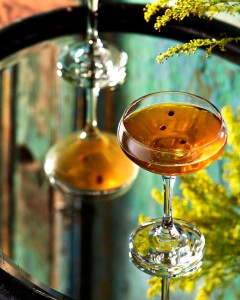 Tommy Bahama Island Grille
The holidays are filtered through the lens of Newport Beach a wee bit differently than other parts of the country. To wit: The city’s been doing the boat parade thing for over a century. It stands to reason that an ideal holiday drink around here would involve a little coastal tinge, and this tropically-accented venue delivers on that promise through its Old Sailor concoction. There’s a lot of moving parts to this beverage: Sailor Jerry’s spiced rum and Old Overholdt Rye blend with Benedictine, simple syrup, Angostura bitters, and orange juice. Yet the mélange of ingredients create a hearty yet breezy cocktail that’s the taste equivalent of how Newport Beach feels in December.