Go On 5 Star Whale Watching Cruise For Under $20 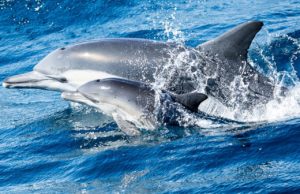 Newport Beach has so much to offer with beautiful beaches, the finest shopping, and one of the largest recreational harbors in the nation. But would you think to add whale watching to this list ? Whale watching is often more associated with remote locales and day long treks to view these amazing mammals, but Newport Beach doesn’t fit the norm for whale watching destinations with 2-2.5 hours cruises and viewing opportunities within 10 minutes of the start of your cruise. Why does Newport Beach rank as one of the top year round whale watching destinations in the world? Just outside Newport Harbor lies a giant marine protected park that stretches for over 50 square miles. The giant marine protected park was created to ensure a very special marine ecosystem would thrive for generations to come. Over 6 different species of whales and 4 different species of dolphin are found within the marine park and whale watching in the park is exceptional. 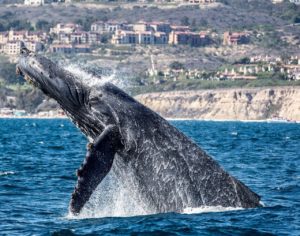 Winter and Spring months see 20,000+ gray whales migrate along the Newport Beach coastline. Many of the gray whales are newborn calves and their moms, a very special treat for whale watchers. Along with thousands of gray whales, humpback whales, minkes whales, and finback whales are also sighted in March & April. The whale watching is so good it is not uncommon to see 5 or more gray whales on a single whale watching cruise. And the grand slam of whale watching seeing 3 different whale species on the same cruise is also possible. Although the whales take center stage on whale watching cruises out of Newport, wild dolphin pods are a close second. Several species of dolphin reside year around off Newport including bottlenose, common, pacific-white sided, and the giant Risso dolphin (over 14 feet in length). The common dolphin gather in large to very large pods called Mega Pods that can number 1000 dolphin or more and is quite an amazing sight to witness with what seems like the whole ocean filled with jumping dolphin as far as you can see.

If visiting Newport Beach rather for the day or several days a whale watching cruise should be added to the “things to do” list. There are several whale watching cruise companies in Newport including Davey’s Locker Whale Watching and Newport Landing Whale Watching. Both are located on the historic Balboa Boardwalk and each company offers several cruise times every day. Davey’s Locker has a special kid’s free offer where two kids and parents could go whale watching for about $80 total. Newport Landing Whale Watching has a $16 whale watching cruise special that is valid for all cruise times and days of week/weekend. Make sure to bring a camera or have your phone fully charged and don’t forget to take in some of the most scenic coastline in California while on your cruise. You will not be disappointed.