“Rip currents are the leading surf hazard for all beachgoers,” says Lifeguard Captain Brian O’Rourke of the Newport Beach Lifeguard Department. Moving swiftly at one or two feet per second (“Speeds as high as eight feet per second have been recorded — that’s faster than an Olympic swimmer can sprint!”), they’re particularly dangerous for weak swimmers but can sweep even the strongest swimmer away in the right conditions. “Right now, we’re experiencing extremely heavy surf with big waves and strong currents,” says Brian, noting that it’s important to check for “safe spots” before you head to the beach. And if you do get caught in a rip current, Brian says, “Stay calm, swim sideways and wave for help.” People get into trouble when they panic, try to fight the current and tire themselves out. Here, Newport Beach lifeguards share other important rules to keep you safe in and near the water this summer.

• Trust your instincts: If in doubt, don’t swim out.
• For surf reports and “safe spots,” call 949-644-3171 and 949-644-3047, respectively.
• Swim at lifeguard-protected beaches. Newport Beach has 35 lifeguard towers that are staffed between 10 a.m. and 6 p.m. during summer months. In high-activity areas, hours are 9 a.m. until dark.
• Learn to swim, and never swim alone.
• Never swim while under the influence of alcohol or other substances.
• Always enter the ocean going into the waves. Never turn your back to a wave and allow it to hit you from behind.
• Leash your surfboard or bodyboard to avoid injuring fellow beachgoers.
• Don’t bodysurf, bodyboard or surf straight over the falls — ride the shoulder.
• During a wipeout, land as flat as possible with your hands in front of you. While bodysurfing, extend an arm out in front of you to protect your head and neck.
• Do not float in areas where you cannot swim.
• When boating, always wear a life jacket.
• When in doubt — or unknown waters — don’t dive. This is the leading cause of head, neck and spinal injuries, which can be permanent or fatal.
• Protect your skin with sunscreen when spending a day at the beach or in the water (or anywhere outside).
• Use caution when playing around beach fire pits or barbecues.
• Whether in the sand or surf, always be mindful of those around you.
• Keep an eye out for “shark sighted” signs, and swim close to shore. The farther out you go, the deeper into marine life territory you are — and the more difficult it is for lifeguards to get to you should you get into trouble. “Plus,” adds Brian, “there’s a lot of boating this time of year, so it’s safer to just stay close.”

OBEY THE FLAGS
“Newport Beach has a few spots that are typically calmer in the summer,” says Brian, including Corona del Mar State Beach and Blackies (24th Street). Others, such as The Point (18th Street) and The Groins (West/Upper West Newport) are known for their dangerously strong currents and should not be explored by less experienced swimmers. “And unless you’re an expert swimmer, stay away from The Wedge.” The colored flags you see on Newport Beach’s lifeguard towers work like a stoplight: Pay attention. 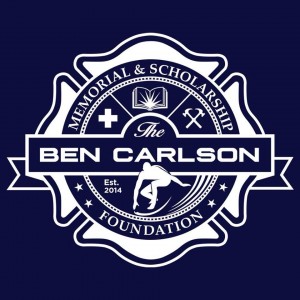 IN MEMORIAM
On July 6, 2014, 32-year-old Newport Beach lifeguard Ben Carlson, a 15-year veteran of the department, tragically drowned while making his final rescue during a busy Fourth of July weekend that brought rough seas and large swells. The man he dove from the Sea Watch II rescue boat he was patrolling on to save, survived. Ben was the first lifeguard to die in the line of duty in the department’s 100-year history, and has since earned four Medals of Valor as well as a dedication from the City of Newport Beach to rename the lifeguard headquarters. The Ben Carlson Foundation, subsequently founded by family, friends and colleagues to honor his memory and provide student scholarships, will remember Ben this July 6 through the unveiling of a new statue. Created by artist Jake Janz, the 9-foot-tall stainless steel image of Ben will be installed at McFadden Square near the Newport Pier. “The concept behind the design was to create a stoic and iconic figure overlooking the water that Ben so proudly protected for 15 years,” the foundation states on its website (bencarlsonfoundation.org). “It will not only be a tribute to Ben’s heroism, but it will also serve as a symbol of respect to lifeguards everywhere. We hope that this statue will forever be a reminder of the respect that the ocean ahead deserves.” The event begins at 7 p.m. and will include music and entertainment in celebration of Ben’s legacy.