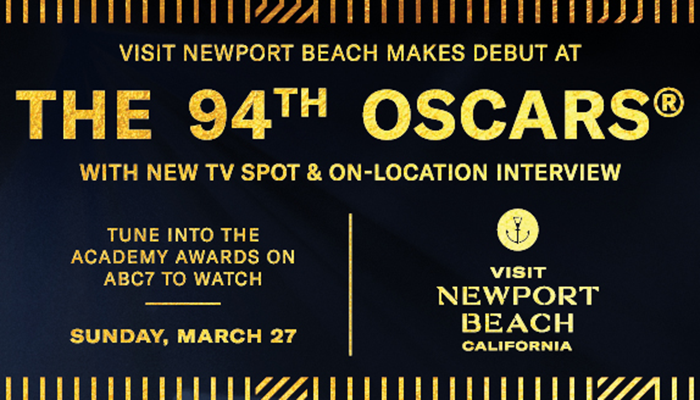 Newport Beach is in the Spotlight in the Award-Winning “On the Red Carpet After the Awards” show following the 94th Academy Awards; Integration Honors Destination’s Storied Cinematic History

NEWPORT BEACH, CALIF. (March 26, 2022) – Visit Newport Beach, the destination-marketing agency for the city of Newport Beach, is making its debut on Sunday, March 27in ABC7/KABC-TV Los Angeles’ entertainment special “On The Red Carpet After the Awards.” The new media integration celebrates the destination’s long-standing history with Hollywood. Newport Beach’s cinematic ties took center stage in several integrations for the award-winning “On the Red Carpet” during Oscars® week. Viewers from 51 markets around the country will tune in to ABC’s “On the Red Carpet After the Awards” the post-show following the Oscars® in the (9:00-11:00 p.m. PDT) time frame .While viewers nationwide are watching a special recap from entertainment reporters hosting from the most exclusive A-list Hollywood parties, they will also experience a custom-created 30-second commercial spot that will run several times, 90-second pre-packaged, on-location video segment, billboards ads, promotions and sponsorships.

“This year marked the 94th Annual Academy Awards, and well before the first Oscar was handed out nearly 100 years ago, Newport Beach has enjoyed a long-standing history with Hollywood serving as a silent film set, to a haven for Hollywood’s Golden Era actors and actresses to inspiring stories for TV and film today,” says Gary Sherwin, President & CEO, Visit Newport Beach. “We are inviting visitors to come an hour south of Tinseltown to walk in the shoes of Hollywood’s legends and feel like an A-Lister as our world-class hospitality industry rolls out the red carpet every day of the year.”

The 30-second commercial spot was specially created to appear on Hollywood’s biggest night, during “On The Red Carpet After the Awards.” and chronicles the destination’s colorful cinematic history, showcasing historical black and white images which animate to modern day to showcase the same gorgeous setting that Hollywood has been flocking to for generations. A pre-packaged destination segment was also debuted featuring Gary Sherwin, President & CEO of Visit Newport Beach, and Jenelle Riley, Deputy Awards and Features Editor at Variety and shot on location at Balboa Bay Resort.

While 2022 marks Newport Beach’s first appearance on Oscars® Sunday, the stunning seaside destination’s big break came during the silent film era from the original “Cleopatra” in 1917 and “All Quiet on the Western Front” in 1930, to modern-day TV shows such as “The OC” and “Arrested Development.” Legends from the silver screen made Newport Beach their personal coastal hideaway from destination’s very own first Miss Newport Beach, Shirley Temple to Bogart and Bacall’s storied romance out at sea. Newport Beach continues to be a haven for Hollywood, where guests from around the world retreat away for A-List vacations.

Building on the destination’s filmmaking roots, the Newport Beach Film Festival has continued the long tradition of cinematic excellence and established a reputation as the largest luxury festival in the United States. Last October, it honored 2022 Oscars host Regina Hall and hosted advanced screenings of Academy Award contenders including “Power of the Dog,” “The Lost Daughter,” “Belfast,” and more.