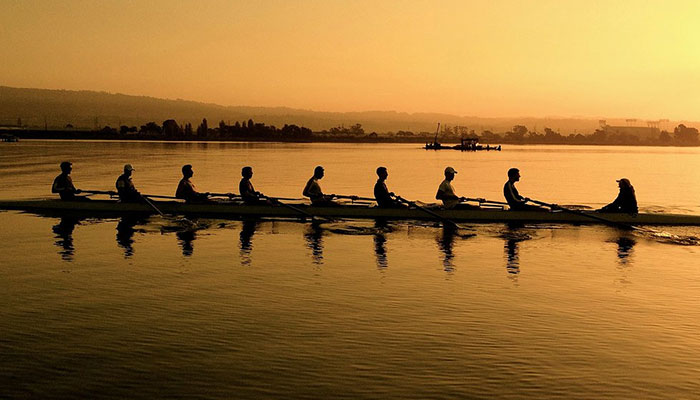 NEWPORT BEACH, CA (October 8, 2014)-The Rowing Club of the Newport Beach Sea Base will start a new tradition this holiday season as they transform their rowing boat into a reindeer sleigh on water, powered by 9 athletes representing each of Santa’s reindeer, as they glide around the harbor with Santa in tow for the 106th Newport Beach Christmas Boat Parade. They will participate in the final two nights of the Parade, Saturday, December 20 and Sunday, December 21.

Newport Beach locals Michelle and Aaron Green teamed up with the Newport Sea Base to bring a community driven rowing program this past August. With an emphasis on raising awareness in the greater Orange County area about the benefits of participating in the sport of rowing, Newport Sea Base Rowing is committed to bringing family and fun together to the community.

“One of the biggest draws for our program has been the college recruiting process that we have for our athletes, which includes a college recruitment advisor. College admissions has become more and more competitive, and by having your application flagged by a rowing program goes a long way toward getting into your dream school,” shared Michelle Green. She goes on to explain that Title IX, an initiative which increased collegiate funding to women’s sports, has been pivotal in the rowing community, with more high school athletes being recruited than in any other sport – and nearly 1 of every 2 female athletes receiving scholarships to row in college.

The Newport Sea Base Rowing program has many programs in place, which includes programs for junior high, a competitive high school team, an adult learn to row that meet on the weekends, ERG Classes during the week and they are planning on filling the calendar with many more options for the community to get out and row!

The theme for the 2014 Christmas Boat Parade is “Deck the Hulls with Bows of Jolly”.

For information on hotel packages or restaurants with specials during the parade go to www.visitnewportbeach.com.

For more information on the Newport Sea Base Rowing, go to www.seabaserowing.org or contact Michelle Green/949-396-1302.

About the Newport Sea Base
Since 1937, the Newport Sea Base has provided fun and valuable educational maritime-based programs to all youth. Year-round, girls and boys learn oceanography, marine biology, environmental science, boating safety, dinghy and keelboat sailing, canoeing, kayaking, motor boating, and other aquatic-related subjects. Newport Sea Base Rowing is open to anyone residing in Orange County, California.