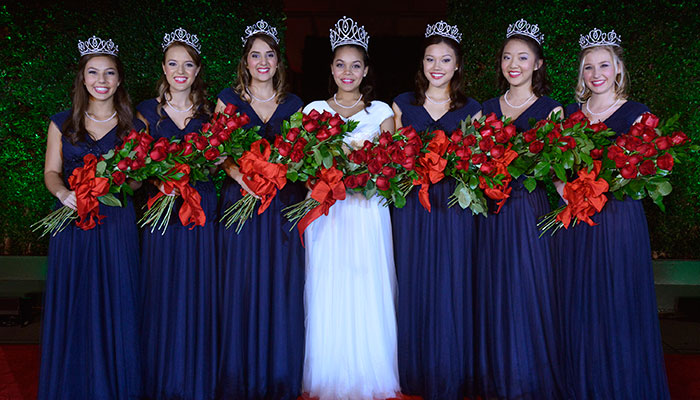 NEWPORT BEACH, CA (October 29, 2014)– The Tournament of Roses 2015 Royal Court will dazzle one of the boats this year on the fourth night, Saturday, December 20 2014, at the 106th Annual Newport Beach Christmas Boat Parade. This will mark one of approximately one hundred appearances for the Rose Queen® and the Royal Court before the official Rose Parade® on January 1, 2015. Having the beautiful ladies of the Royal Court participate in the Newport Beach Christmas Boat Parade celebrates and commemorates the extensive history of both parades by starting this new tradition. This year’s Rose Queen is Madison Tripett and the Royal Court is Bergen Onufer, Simona Shao, Gabrielle Current, Mackenzie Byers, Veronica Mejia and Emily Stoker.

The Newport Beach Christmas Boat Parade and Ring of Lights home decorating competition is Newport Beach’s Christmas card to the world. The boat parade runs for five consecutive nights, beginning Wednesday, December 17 and ending Sunday, December 21, 2014. Each night the parade starts at Bay Island at 6:30 p.m. and finishes at the same site at approximately 9:00 p.m., completing its 14.7-mile route around Newport Harbor. The theme for the 2014 Christmas Boat Parade is “Deck the Hulls with Bows of Jolly”.

“How fortunate that a parade that inspired my grandfather will be honored in our parade on water. Combining the rich history of both parades pays homage to the fun Southern California holiday pastime that people know and love, “says David Beek, 2014 Newport Beach Christmas Boat Parade Co-Chairman.

Since 1890, the Tournament of Roses has helped the world welcome the New Year. The magnificent floral floats in the Rose Parade and the exciting football action at the Rose Bowl® Stadium have become holiday traditions for millions of people around the world. Reigning over these festivities is the Royal Court. The first Rose Queen was crowned in 1905 and every year since 1929, the Royal Court has been part of the Tournament of Roses tradition. The 126th Rose Parade themed “Inspiring Stories,” will take place on New Years Day, Thursday, January 1, 2015.

For information on hotel packages or restaurants with specials during the parade go to www.visitnewportbeach.com.

For more information about the Rose Parade go to
www.tournamentofroses.com.

About the Pasadena Tournament of Roses®
The Pasadena Tournament of Roses is a volunteer organization that annually hosts the Rose Parade®, the Rose Bowl Game® and a variety of associated events. The Tournament’s 935 volunteer members act as ambassadors of the organization within the community and serve on one of 31 committees that ensure the success of the parade and game. Collectively, they contribute upwards of 80,000 hours of manpower each year. The 126th Rose Parade presented by Honda and themed “Inspiring Stories,” will take place Thursday, Jan. 1, 2015, followed by the College Football Playoff Semifinal at the Rose Bowl Game presented by Northwestern Mutual.