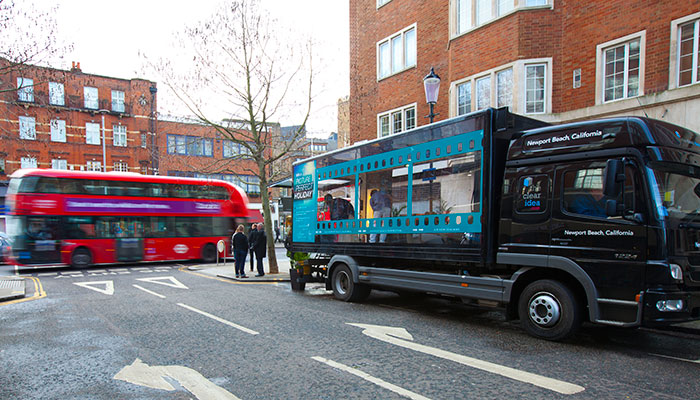 “We strategically chose the winter season to tell the Newport Beach story to countless consumers, travel journalists and tour operators throughout London” says Doug McClain, senior vice president and chief marketing officer, Newport Beach & Company. “The appeal of year-round Mediterranean climate in our luxurious and charming coastal retreat, resonated with consumers experiencing the warm beach ambiance on the truck during their coldest time of year.”

The truck embarked on a tour of central London, from February 2 – 6, 2015, throughout densely populated areas where locals frequent and districts where travel agents and media hubs are located. Visitors who entered the truck were encouraged to take a “selfie” on lounge chairs in front of the Newport Beach coastal scene and tag #pictureperfectNB to engage the truck visitors’ social media database.

The Picture Perfect sweepstakes was also launched, offering a lucky winner a dream vacation to Newport Beach. The sweepstakes package includes two round-trip international flights, compliments of Air New Zealand. The winner also will receive a hotel stay for nine nights, an all-access VIP pass to the Newport Beach Film Festival (including walking the red carpet on opening night), airport transfers, Fashion Island shopping gift card and a dining certificate. The models on the truck used iPads to encourage visitors to enter the online competition. Movado, an additional sweepstakes partner, offered luxury watches for seven sweepstakes runner-ups and promoted the campaign at point-of-sale and in its shop windows.

“Our outreach and partnerships in the UK have succeeded our expectations,” says Gregg Schwenk, co-founder of the Newport Beach Film Festival, “our event with Benedict Cumberbatch and Kiera Knightly was the talk of London, and we are looking forward to more exciting opportunities with our partners and luxury brands.”

Travel-Trade Program: Lastly, Newport Beach & Company executed a travel-trade program to engage travel agents and tour operators to book a Newport Beach holiday for their clients during the campaign. To add further incentive to participate, every tour operator who books a vacation to Newport Beach is entered into a sweepstakes to win a dream vacation to the destination. Black Diamond circulated a press release to alert travel trade media of the sweepstakes. For more information about the travel trade program, please visit www.visitnewportbeach.com/trade/

“After a week of non-stop media pitches, nationwide radio interviews, a star-studded reception, and a Newport Beach truck full of sand, sun and warmth, we can honestly say Newport Beach was the toast of the town. Aligning our gem of a city with A-list stars and out-of-the-box marketing elevated the Newport Beach brand to new heights in one of our top international feeder markets” says McClain, Newport Beach & Company.

About Newport Beach Film Festival
Celebrated as one of the leading film festivals in the United States, the Newport Beach Film Festival has evolved into a prestigious multicultural event, attracting over 55,000 attendees to Southern California. Committed to enlightening the public with a first-class international film program, a forum for cultural understanding and enriching educational opportunities, the Festival focuses on showcasing a fresh and diverse collection of studio and independent films from around the globe. The 16th Annual Newport Beach Film Festival will screen an international slate of over 400 independent and studio films, including feature-length narrative, documentary, short, animated and student films that will compete for a series of Jury, Festival Honors and Audience Awards. www.NewportBeachFilmFest.com