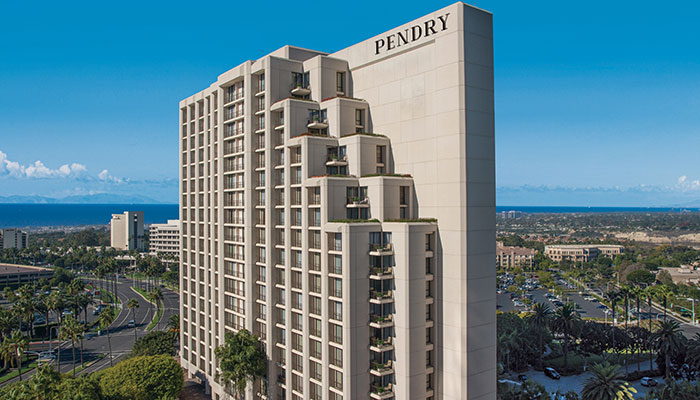 “We have had incredible growth with Pendry this past year, opening hotels from coast to coast in some of America’s most vibrant destinations,” said Alan J. Fuerstman, Founder, Chairman and CEO, Montage International. “Now we have an irreplaceable location for Pendry Newport Beach, and an opportunity to bring the Pendry experience ‘home’ to Orange County where both the Montage and Pendry brands originated,” Fuerstman said.

“As local owners, we are thrilled to be the new stewards of the former Fashion Island Hotel at the heart of Newport Beach. We are dedicated to continuously investing in Newport Beach and elevating the hospitality experience of our neighbors and guests,” said Kevin Martin of Eagle Four Partners. “We are grateful to the Irvine Company for entrusting us with this responsibility and sharing our vision as we collaborate with Montage International to create something extraordinary,” said Kory Kramer of Eagle Four Partners.

Pendry Newport Beach will feature approximately 295 guestrooms, including 82 suites, each with floor-to-ceiling windows that open to step-out balconies or private patios with ocean, harbor, and bay views. The hotel will deliver three unique lounge, restaurant, and bar experiences—including a pool, sundeck, and cabanas, in addition to a private membership club focused on creating community, delivering bespoke experiences, and connecting a diverse group of people from different backgrounds and industries. Pendry Newport Beach will feature more than 14,000 square feet of meeting and event space, including an 8,710-square-foot ballroom. The hotel will also feature fitness and wellness experiences including a fitness center, Spa Pendry, featuring eight treatment rooms, and a comprehensive signature health, beauty, wellness, and relaxation program. The hotel interior design will be completed by Studio Munge; architecture by WATG and landscape architecture by Burton Studio.

“It is an absolute thrill and honor to bring our vision for Pendry and new luxury to Newport Beach, the place we call home,” said Michael Fuerstman, Co-Founder and Creative Director, Pendry Hotels & Resorts. “Pendry Newport Beach will be a sophisticated, modern, and artistic luxury hotel for guests and locals, with an elevated dining, nightlife, wellness, and social scene, as well as a wholly original, one-of-a-kind community focused social membership club. We look forward to creating a distinct destination within Newport Beach.”

Pendry Hotels & Resorts is a new luxury hospitality brand from Montage International. Pendry combines inspired design with a celebration of culture and authentic service tailored to today’s cultured world traveler. Founders Alan J. Fuerstman and Michael Fuerstman’s well-seasoned experience in the hospitality industry serves as the foundation for the brand. Each property is injected with a unique perspective on contemporary style, and an emphasis on the arts and local community in the city it calls home. The portfolio of hotels includes Pendry San Diego, Sagamore Pendry Baltimore, Pendry West Hollywood, Pendry Chicago, Pendry Manhattan West and Pendry Park City. Opening in 2022 Pendry Washington D.C. – The Wharf. Opening in 2023 is Pendry Natirar, and Pendry Cincinnati and opening in 2024 is Pendry Tampa. Pendry Hotels & Resorts is a member of Preferred Hotels & Resorts. For more information on Pendry Hotels & Resorts, follow @pendryhotels or visit www.pendry.com.