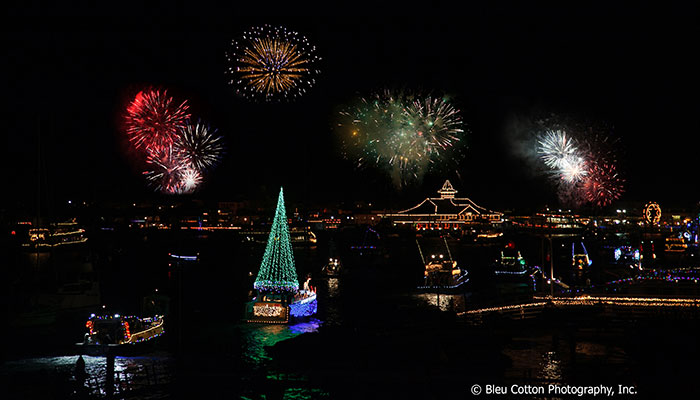 NEWPORT BEACH, CA (September 16, 2014) – Comedic actress Leslie Mann and Mark McGrath, actor, songwriter and lead singer for the band Sugar Ray have been named as the first ever Grand Marshals for the 106th Annual Newport Beach Christmas Boat Parade. Mann and McGrath have both called Newport Beach home since their childhood attending Corona del Mar High School and are looking forward to coming back to Newport Beach on opening night to take part in this historical and fun holiday event.

The theme for the 2014 Christmas Boat Parade is “Deck the Hulls with Bows of Jolly”.

“We are incredibly honored to have Leslie Mann and Mark McGrath as Grand Marshals for this year’s parade. It has been thrilling to watch both of their successful careers throughout the years and how wonderful to have them back in their hometown at the holidays. The Newport Beach Christmas Boat Parade embodies the spirit of generosity, kindness and a true passion and love for community akin to Dickens’ “A Christmas Carol” says Newport Beach & Company President and CEO Gary Sherwin.

Leslie Mann is Hollywood’s reigning funny girl. Funny and gorgeous, Mann’s breakout role came opposite Jim Carey in The Cable Guy, which is where she met her now husband, writer/director/producer Judd Apatow. Since then she has topped the box office in hits like, This is 40, Knocked Up and The 40-Year Old Virgin. She has also lent her voice to animated films, Mr. Peabody and Sherman, ParaNorman, Rio, and Rio 2. Among her other feature films are George of the Jungle, Big Daddy, Orange County, 17 Again and The Change Up. Most recently Leslie starred opposite Cameron Diaz and Kate Upton in, The Other Woman.

Mark McGrath began singing in 1988 and in 1994, his band Sugar Ray signed with Atlantic Records. Their first success came in 1997 with the song “Fly”. Since then, Sugar Ray has had numerous hits spanning five albums including songs “Every Morning”, “Someday”, and “When It’s Over.” McGrath, also an actor is known for hosting shows like ‘Killer Karaoke’ and ‘Extra.’ He was most recently seen in the campy TV phenomenon “Sharknado 2: The Second One.”

For more information about the 106th Annual Newport Beach Christmas Boat Parade, please visit www.christmasboatparade.com. For information on hotel packages, or restaurants with specials during the parade go to www.visitnewportbeach.com.