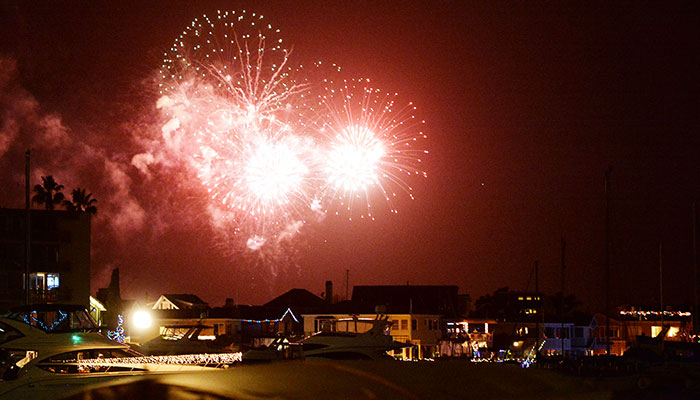 NEWPORT BEACH, Calif. – Now in its 107th year, the Newport Beach Christmas Boat Parade has announced a spectacular Grand Marshal lineup for the five-night holiday tradition. For the first time in its history, multiple nights of the parade will include Grand Marshal appearances by talented athletes, entertainers and distinguished members of the community.

Drawing millions of visitors annually, the Newport Beach Christmas Boat Parade is the longest- running, lighted holiday boat parade in the nation and the largest harbor parade in California. Hosted by the Commodores Club of the Chamber of Commerce, the boat parade begins Wednesday, Dec. 16, and ends Sunday, Dec. 20, 2015, featuring approximately 100 festive boats and the theme “Seas the Holidays.”

Nightly festivities include fireworks and an all-star Grand Marshal line-up as follows:

• Wednesday, Dec. 16 – Arte Moreno: Los Angeles Angels of Anaheim owner Arte Moreno has guided the Major League Baseball team to six American League West Division championships over the past 12 years. A leader both on and off the field, Moreno established the Angels Baseball Foundation in 2004 to invest in education, healthcare, arts and sciences and community-related youth programs throughout the region.
Fireworks will light the sky to kick off this year’s event and can be seen lighting the sky over the Newport Beach Pier about 6:15 p.m..

• Friday, Dec. 18 – “The Voice” Season 8 Contestants: Four alumni from the hit NBC singing show “The Voice” will bring their talents to Newport Harbor including: Brian Johnson, whose impressive vocals and range landed him a spot on the top 12 of the competition; Jacob Rummell, a singer-songwriter with powerful vocals reminiscent of Michael Jackson and Bruno Mars; Bay Brooks, a free-spirited singer with her own unique, soulful spin on country music; and Barry Minniefield, the soulful singer also known as “Hollywood’s Singing Chef” for his extraordinary talents in acting, singing and cooking.

• Sunday, Dec. 20 – Fireworks Finale: A stunning fireworks show will conclude the five-day holiday celebration. Visitors are encouraged to secure a spot near the Balboa Pier to view the show, which starts with a bang at 9 p.m.

“We’re thrilled to have such a fantastic group of athletes, entertainers and community members as part of this year’s parade,” said Steve Rosansky, president and CEO of the Newport Beach Chamber of Commerce. “It gets better with each passing year, and we’re looking forward to five unforgettable nights of festive fun.”

The parade will begin at Bay Island at 6:30 p.m. and end at the same site at approximately 9 p.m. each evening, completing its 14.7-mile route around Newport Harbor. The route offers multiple viewing spots around the harbor for residents and visitors to enjoy for free, as well as a number of restaurants around town offering beautiful harbor views.

Debuting December 5, Marina Park will be a brand new viewing area for this year’s parade. The 10.5-acre recreational center will provide ample space for parade-goers, with family-friendly activities planned there each night. A full map with all viewing locations and corresponding times can be found online here.

With a wide variety of participating vessels, the festively-decorated yachts, dinghies and kayaks will vie for the top prize in categories including Best Animation/Special Effects, Best Humor/Originality, Best Music and, of course, Best Lights.

Serving as the backdrop for the parade is the annual “Ring of Lights” contest. A spectacle all its own, beautifully decorated bayside homes and businesses surrounding the harbor go all out with their own holiday spirit, featuring everything from rooftop animated scenes to dancing Christmas trees. With its own judged categories and prizes awarded, the “Ring of Lights” has become as celebrated as the boat parade itself.

Boaters interested in participating in the parade can find out more information at www.christmasboatparade.com.

About the Newport Beach Chamber of Commerce
The Newport Beach Chamber of Commerce is a business organization of almost 800 members representing over 20,000 employees. The Chamber, with its five councils, committees, staff and valuable members, works with city officials, local businesses and the community at large to promote the local economy. More information can be found at www.newportbeach.com.