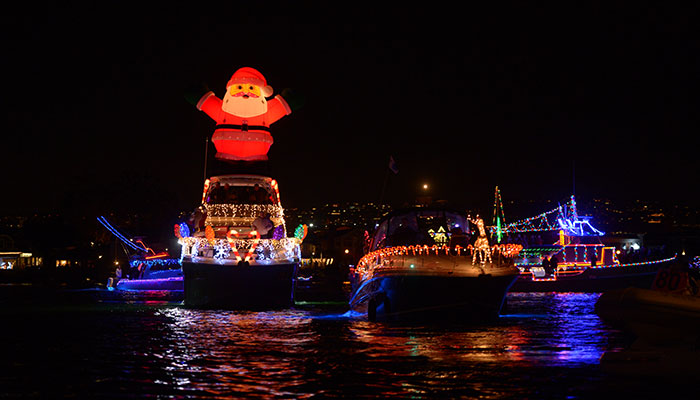 Drawing millions of visitors annually, the iconic Newport Beach Christmas Boat Parade is the largest harbor parade in California. Hosted by The Commodores Club of the Newport Beach Chamber of Commerce, the boat parade features approximately 100 festive entries motoring along a 14 miles course to give viewers in restaurants, yacht clubs, on public beaches, and in private homes a sight that has become a cherished tradition for residents and visitors for over a century. Serving as the backdrop for the parade, the “Ring of Lights” waterfront-decorating contest sparks a cheerful and competitive spirit amongst residents and businesses. With its own judged categories and prizes awarded, the “Ring of Lights” has become as celebrated as the boat parade itself.

The parade begins at Bay Island at 6:30 p.m. and ends at the same site at approximately 9 p.m. each evening. The route offers multiple viewing spots around the harbor for residents and visitors to enjoy for free, and a number of restaurants around town offering beautiful harbor views from their dining rooms.

Marina Park, which opened last year, will once again provide ample space to view this year’s parade. The new 10.5-acre recreational center welcomes parade-goers with family-friendly activities each night. A full map with all viewing locations and corresponding times can be found online here.

In addition to the boat parade, this year features a special charity event to benefit the American Childhood Cancer Organization. For the first time, the organization’s National Golden Ribbon Awareness Tree will be erected on the west coast in Newport Beach’s Marina Park. The Newport Beach Chamber of Commerce and Newport Beach & Company are teaming up to make a significant donation to the group.

The Christmas Boat Parade, which has been hailed as “one of the top ten holiday happenings in the nation” by the New York Times, is truly a holiday tradition for all ages. The parade continues to be a premier event during the holiday season in Southern California that brings joy and happiness to all who view it.

With a wide variety of participating vessels, the festively-decorated yachts, dinghies and kayaks vie for the top prize in categories including Best Animation/Special Effects, Best Humor/Originality, Best Music and, of course, Best Lights.

Exciting festivities include fireworks and an amazing all-star Grand Marshal line-up as follows:

“Our Christmas Boat Parade has become an honored tradition for over one hundred years now, and it just keeps getting bigger and more spectacular,” remarks Steve Rosansky, president and CEO of the Newport Beach Chamber of Commerce. “We have a terrific line-up of Grand Marshals, fireworks for our opening and closing nights, and millions of sparkling lights across our beautiful harbor.”

Boaters interested in participating in the parade can find out more information at www.christmasboatparade.com.

About the Newport Beach Chamber of Commerce
The Newport Beach Chamber of Commerce is a business organization of almost 800 members representing over 20,000 employees. The Chamber, with its five councils, committees, staff and valuable members, works with city officials, local businesses and the community at large to promote the local economy. More information can be found at www.newportbeach.com.