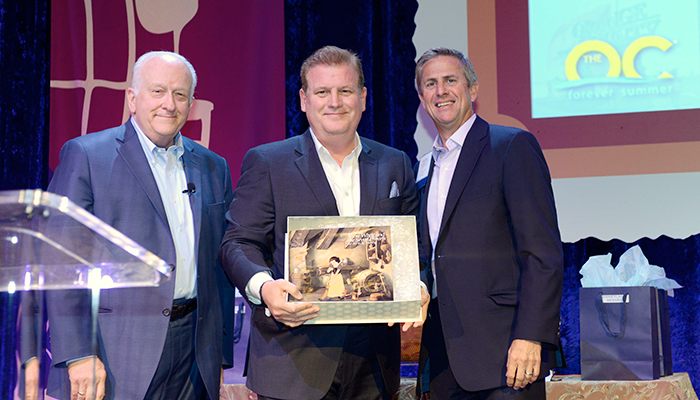 NEWPORT BEACH, Calif. – The Orange County Visitors Association (OCVA) honored Newport Beach & Company president and CEO Gary Sherwin with the Legacy Award at the annual Orange County Tourism Conference on May 6. The Legacy Award recognizes a visionary in the tourism industry for contributing to the awareness, positive reputation and growth of tourism in Orange County.

Since 2006, Sherwin has led the organization that serves to promote Newport Beach as a premier luxury conference and leisure destination. He was instrumental in the creation of the city’s first Tourism Business Improvement Districts (TBID), as well as a variety of business units – including Visit Newport Beach, Dine Newport Beach, Enterprise Newport Beach and Newport Beach TV – that work in tandem to grow the economic vitality of Newport Beach. Under Sherwin’s leadership, the city has seen a 625 percent increase in conference sales room nights, from just over 10,757 to the projected 2015 goal of 78,000 room nights.

In addition to his role as president and CEO of Newport Beach & Company, Sherwin served as the president of the OCVA board of directors for three years, where he played a critical role launching Orange County’s international offices and driving 47.1 million visitors and $10.7 billion in visitor spending to the region.

“Gary’s dynamic leadership and innovation have been instrumental to Orange County tourism and produced remarkable results,” said Ed Fuller, OCVA president and CEO. “He is an invaluable asset to the region.”