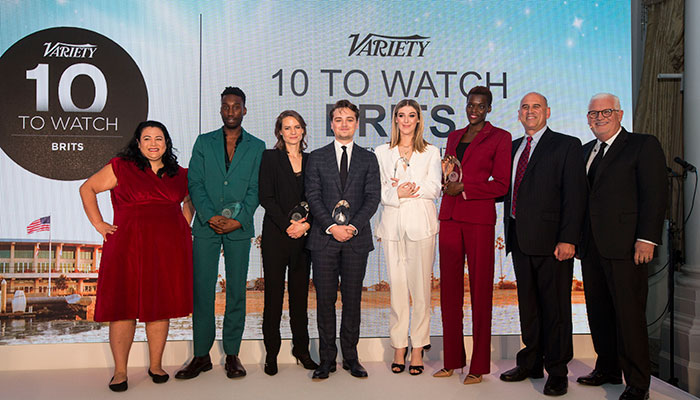 Additionally, Variety, the entertainment industry bible, has partnered with the Newport Beach Film Festival to present their annual list of 10 Brits to Watch at the UK Honours ceremony.

ICON:
Richard E. Grant (Can You Ever Forgive Me? Gosford Park)

Sir Ian Holm (The Lord Of The Rings film trilogy, Chariots of Fire)

“The Newport Beach Film Festival is proud to recognize such outstanding U.K talent at our 6th annual honors event. For over two decades, the Festival has placed a spotlight on amazing performances from across the United Kingdom. We are excited to continue our incredible partnership with Visit Newport Beach and Variety with this very special evening celebrating the best of British talent. We look forward to honoring these exceptional artists in London and at the Festival in April.”

“Newport Beach is a picture-perfect destination, boasting a rich cinematic heritage as a movie set since the silent film era and the inspiration for some of pop culture’s greatest TV hits. By bringing a little California sunshine to London this month, we hope the British community is inspired to travel to Newport Beach and experience a vacation like Hollywood royalty.”

Presented by Jenelle Riley, deputy awards and features editor, Variety’s 2020 10 Brits to Watch are as follows:

Laura Solon (writer, Let it Snow, Back to Life)

Images from 2020s event will be available via Getty.

Located between Los Angeles and San Diego, Newport Beach is the gem of the California Rivera and a popular vacation destination for the global jetsetter. This idyllic chic seaside city is the ultimate destination to relax and unwind among its natural beauty, recreational yacht harbor, eclectic coastal cuisine, wellness offerings and world-class shopping. Comprised of ten distinct neighborhoods, each lend a unique culture, charm, history and local flavor to explore. Connect with us at VisitNewportBeach.com or @VisitNewportBeach on social platforms.

About The Newport Beach Film Festival

Celebrated as one of the leading lifestyle film festivals in the United States, the Newport Beach Film Festival (NBFF) seeks to bring to Orange County the best of classic and contemporary filmmaking from around the world. Committed to enlightening the public with a first-class international film program, a forum for cultural understanding and enriching educational opportunities, the NBFF focuses on showcasing a diverse collection of studio and independent films from around the globe. The 21th annual Newport Beach Film Festival runs April 23 – April 30, and will spotlight over 300 films from more than 50 different countries.

Recognized and respected throughout the world of show business, Variety is the premier source of entertainment news. Since 1905, the most influential leaders in the industry have turned to Variety for timely, credible and straightforward news and analysis — information vital to their professions.