A one-of-a-kind, man-made treasure, Balboa Island is a gem whether you drive, walk, bike or take the Balboa Island Ferry to the island. Balboa Island’s Marine Avenue is home to chic coastal shops featuring unique nautical designs, stylish beach fashions, art and jewelry. It’s also home to quaint Balboa Island restaurants and bistros serving up a variety of dishes bursting with flavor. There may be nothing more iconic than the island’s two famous desserts, the Balboa Bar and Frozen Banana.

Initially founded in 1906, Balboa Island was formed from the dredging of a channel on the north side of Newport Harbor that deposited the sand and silt on tidelands that would help form it. At one point, the lots were being sold for as little as $25, with promises that all streets, sewers and streetlights would be installed with a ferry and bridge to follow. Considerable Balboa Island property was sold to residents of Pasadena, and this is one of the reasons that so many longtime residents continue to have strong ties to that area. The Island grew slowly at first, but in 1916 it officially became part of the City of Newport Beach. In those early days, water came from the famous “Wooden Water Tower” on Agate, and Park Avenue was the only paved road on the entire island! 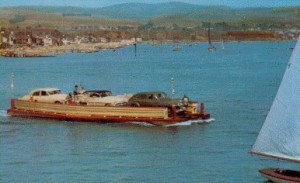 In 1919, Joseph Allan Beek, who played a crucial role in the development of Balboa Island, contracted for the first ferry between the Island and Balboa Peninsula. By 1920, the first car was pushed across the bay for a mere ten cents! In 1922, Beek got a fifteen-year franchise for the ferry that has continued until this day, now with three 64-foot boats that can carry three cars each. In the 1920’s and 30’s, many movies were filmed on Balboa Island, making it the new getaway for Hollywood stars like Humphrey Bogart and John Wayne.

Over the years, Balboa Island has developed into a wonderful community, home to families, retirees and celebrities alike. Those same Bayfront homes that sold for $25 in the early 1900s are now appraised at over $3 million! And yet, Balboa Island maintains its charm and small-town feel with about 3,000 residents.

Balboa Island will be celebrating the 100 year anniversary of Balboa Island being incorporated into the City of Newport Beach. More information and how you can join them in this celebration click here.