Brunching, Boating and the Balboa Fun Zone: A Full Day of Family Fun in Balboa Village

Mention Balboa Village, and for anyone that’s been, you immediately conjure up the best summer days of their childhood, with boat rides, carnival games, and hands sticky and sweet from melting Balboa Bars. Balboa Village has been the heart of Newport Beach for over 100 years, starting back when the Balboa Pavilion was built in 1905. Beachgoers originally used the first floor of the Pavilion to slip out of street clothes and into bathing suits before heading out to frolic and play in the calm waters of Newport Bay. Whether you’re nostalgic for the past or it’s your first visit, you’re sure to find a whole day of fun!

Contest prize: A Balboa Village Staycation for four including the following:

Once a winner is selected, the prize must be redeemed within one year. Contest is open to all. Contest is not affiliated with Instagram in any way. 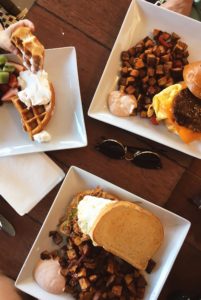 Recipe for Success: Start the day at Balboa Lily’s

Great days start with great meals (in my humble opinion), so you’ll guarantee yourself a good one by snagging a seat on Balboa Lily’s open-air patio. Walk one block down and you’ll be at the beach, or one block up and you’ll be gazing out across the bay. Though it’s hard to beat the location, owner Eunjoo Pluenneke has been working hard to make this spot a local favorite on menu alone. Their signature lattes are artfully crafted and made with locally roasted KÈAN coffee. The Honey Lavender Latte is a fan favorite.

The morning menu is mostly savory, with options like omelets, burritos and sandwiches. You can’t go wrong with the egg and sausage sandwich, but the house specialty slow roasted pulled pork sandwich was so good it had me wondering why I don’t see it on breakfast menus everywhere. If you still have a hankering for something sweet, try the Belgian waffle with caramel sauce. Everything is house-made, from the chipotle cream to the whipped cream.

Soak up the sun with a ride through Newport Bay 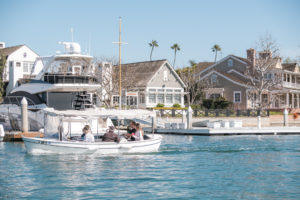 After leaving Balbo Lily’s, slather on the sunscreen, grab your sunglasses, and get ready to hit the water in a Duffy Boat from Boat Rentals of America – Balboa Boat Rentals . If you aren’t already familiar, a Duffy Boat is a 10-passenger boat that is completely electric. These fun little boats are perfect for cruising through the harbor’s glassy waters; in fact, they were invented over 45 years ago right here in Newport Beach. Lifetime resident Marshall “Duffy” Duffield modified an old motorboat by switching out the original motor for a golf cart motor. Soon thereafter, the best way to explore Newport Bay was born.

An hour on the water is the perfect amount of time to circle Lido Island, admire the homes of the rich and famous, and find the only named pier in Newport (charmingly dubbed the “hickory dickory dock”). Stars from Hollywood’s Golden Era, including Shirley Temple, John Wayne, and Humphrey Bogart, all owned homes in Newport Harbor, earning it the title, “The Hamptons of Hollywood.” Though you will have to return your boat at the end of the ride, there’s no harm in enjoying the champagne lifestyle, if just for your tour of the bay. 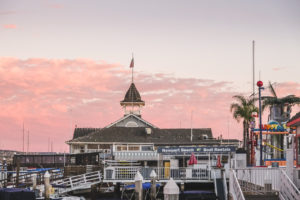 Whatever your lunch craving, there’s something for everyone in Balboa Village. If you opted for a big breakfast, try something light like an açaí or pitaya bowl from Green Element 365. Indulge your love of great Mexican food at the Great Mex Grill (especially on Taco Tuesday); the fish, al pastor, and carnitas are all delicious. Find more upscale fare including fresh seafood and a bay view at the Harborside Restaurant inside the historic Balboa Pavilion. You can’t leave Balboa without indulging in a frozen banana or famous Balboa bar, so make sure to swing by Balboa Beach Treats. See a complete listing of food options in Balboa Village here. 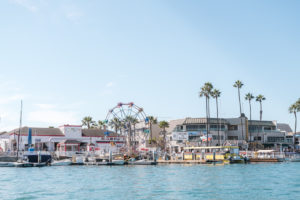 Get in the Zone

Just strolling along the buzzing Balboa Village Fun Zone with its vintage boardwalk feel and old-school arcade can make for an enjoyable afternoon, but if you have kids in tow, you’ll probably want to purchase an all-day wristband for $25. With a wristband, you have an all-access pass to the amusement park rides lining the bay. Practice trampoline acrobatics, scale a coconut tree, or shoot 18 feet up in the air! An all-day pass to the Fun Zone also includes the Discovery Cube’s Ocean Quest and an educational center with interactive exhibits perfect for young and inquisitive minds. Make and race your own paper sailboat, watch a vortex develop before your eyes, or see dry ice sublimate in water. You can even try your hand at being your favorite news channel weather reporter on the green screen exhibit. 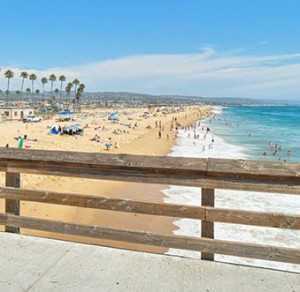 If you find yourself with a few hours to spare before sundown, there’s plenty more to explore around Balboa Village. Rent bikes to go up and down the Newport Boardwalk, or take a walk along the Balboa Pier. Boats leave the bay several times a day for whale watching or deep-sea fishing excursions. If you want more time on the water, rent a stand-up paddle board or kayak to weave around the over 9,000 boats docked in the harbor. 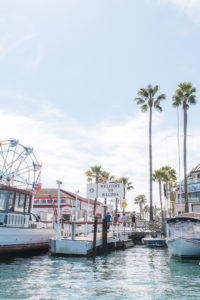 Take a Twirl on the Ferris Wheel at Sunset

Make one last stop on the boardwalk with a spin on the historic Balboa Ferris wheel. Ride at sunset to watch the skies turn cotton candy pink and the lights flicker on at the historic Balboa Pavilion, making a picture-perfect ending to your day in Balboa Village.