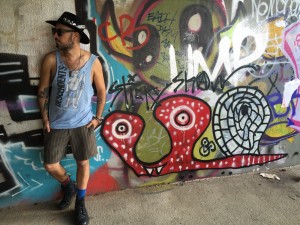 Growing up on Balboa Island, Robert “Sticky” Shaw says he felt different — weird — compared to other kids at school. He wore all black and struggled with dyslexia and had separate interests from his peers. “Newport Beach is a proper place, and I was the kid that liked punk rock and snowboarding and skating — things the ‘bad’ kids liked,” Shaw says. He turned to artwork as an escape: “With art, there is no wrong or right answer. There’s just freedom.” Through his older siblings (he’s the youngest of three), Shaw connected with surfers “Punker Pat” Towersey and Troy Eckert, who were sponsored by Volcom soon after the birth of the surf|skate|board brand. His friends would eventually introduce him to a career in arts, hiring him to collaborate on product design and even hand-paint gear. “Being around Volcom in the early days was amazing,” Shaw recalls. “It influenced my lifestyle and art in so many ways.” The artist continues his relationship with the industry that shaped his future, while evolving into other mediums and forms of expression. Most of his paintings, which have appeared in pop-up shows on the Peninsula, contain layers upon layers of color, text and imagery. Many depict an abstract animal or sea creature. Here, Shaw gives us a peek into his multidimensional profession, as well as his roots in Newport Beach.

What’s in a nickname: “Sticky” comes from junior high, when I would wear my hair slicked back. 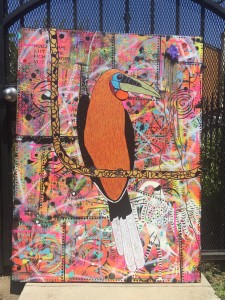 The great escape: Music, nature, cities. These are the things that inspire my work.

A man of many layers: You can see how I try to make the background of my painting look like a city, with graffiti or a dirty punk rock club. Then I will paint a beautiful animal on it. I layer with all sorts of stuff — acrylic spray paints, pens, newspapers, journal entries and other things from my past. (Shaw has been known to include such personal items as love letters, music lyrics and even blood on his canvas.)

The notebook: I have a sketchpad, where keep most of my ideas. This is where the pieces start. 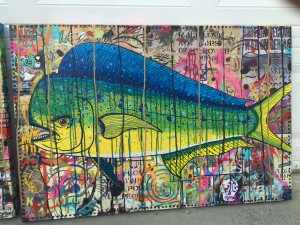 Palette to palate: Growing up in “Newps” was a big influence on my art, and still is. You can see it in the sea life I paint. I’ve always loved the beach, for body surfing and … looking at girls. It’s such a beautiful place. I like to go for bike rides. The Crab Cooker and Bear Flag Fish Co. are some of my favorite places to eat.

Window to the world: I have been traveling, and really like how my art is evolving through my travels. I never know what my next influence will be, or what I’ll want to try that’s different.

Tag team: Street art — tagging — is something else I do. I just got back from Berlin, Germany. I was there for 80 days, running around the streets, finding new spots to spay on. It’s too bad we don’t have this in Newport Beach, because it’s really exciting, and can be really beautiful. Right now I am collaborating with my friend James Haunt on a wall in L.A. I really like working with friends, and think our styles will go well together.

Artist’s Republic for Tomorrow: A lot of my work is shown at this gallery in [nearby] Laguna Beach.

For the record: If I wasn’t an artist, I’d be a band tour manager. And selling T-shirts.