While some might consider Newport Beach’s hotels works of art in themselves — with their lushly landscaped lawns and beautifully designed pools, just to name some standout features — these properties take it to another level with everything from amazing 16th-century tapestries to a notable fountain.

A trip to The Resort at Pelican Hill is like taking an excursion to the museum. Art is displayed throughout the public areas, event spaces and accommodations, and guests are invited to pick up a free self-guided art and architecture tour booklet from the Concierge Gallery or to take a 45-minute guided walking tour Wednesday at 4 p.m. to learn more about the resort’s collection. Of special note: more than 120 contemporary California plein air paintings commissioned specifically for Pelican Hill (in many cases by local artists) and depicting scenes and views surrounding the resort, as well as Renaissance tapestries and antiques in keeping with the resort’s 1500s Palladian-style architecture.

The Fairmont Newport Beach Hotel  also has partnered with a gallery to showcase art in its public spaces, with Galerie Moderne setting up displays of 20th-century works on paper by modern European and American masters form Pablo Picasso to Andy Warhol Tuesday and Wednesday from 6-9 p.m. 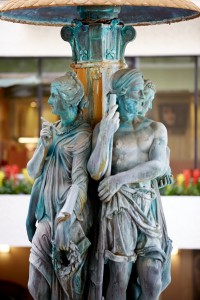 And now for a fun story of how a 30-ton, 115-year-old fountain wound up in the atrium of the Newport Beach Marriott Hotel & Spa. Fashioned in Europe in 1859 by artists E. Vittoz and I.I. Jaquet, the brass and granite fountain-sculpture that features four life-sized figures representing the arts, science, navigation and agriculture was first displayed at the 1868 Great Paris Exhibition. As the story has it, the fountain then was purchased by a wealthy Englishman and shipped to Leighton Hall in Lancashire, England, where it remained for 100 years before landing in the hands of two separate antique dealers. It was then sold to the Marriott Corp. (to Mr. Marriott himself), disassembled and shipped to the U.S. via the Panama Canal. The fountain was stored in a warehouse until construction on the Newport Beach Marriott was completed, and when it came time to re-assemble the sculpture it was discovered that several important pieces had been stolen and sold to a scrap metal firm. As luck would have it, some pieces were saved from the scrap furnace, returned and reassembled, with only the fountain’s large shells having to be recast. It made its debut at the hotel’s opening in April 1975.