Getting Your Toast On in Newport Beach

Whether the year treated you well or stunk on ice, it’s coming to its calendar-appointed conclusion. Good or bad, its concession to 2019 is enough grounds for celebrating with a champagne toast. And let’s be honest: The final fleeting hours of December 31st are really just a fancy excuse to raise a bubbly-filled flute, but who cares if it’s an excuse? There’s champagne involved. Even if 2018 was rotten, drinking sparkling wine is never a bad idea.

Newport Beach’s restaurant scene affords you several opportunities end 2018 on a bubbly note. All the following places will be raising a glass promptly at midnight, each in their own unique ways. If you’re usually in bed by the time midnight hits the east coast, you may want to take a mid-day nap to make sure you have a proper level of energy.

(NOTE: If you’re going to attend any of the following festivities, please bring a designated driver or arrive via Uber or Lyft. Not doing so could have dire consequences for you and for others. Be smart out there, party people).

Aqua Lounge – Black-tie New Year’s Eve events don’t need to be stuffy affairs. Fashion Island Hotel’s lively lounge proves this. Behind the shindig’s formal façade, guests can cut loose with music spun be a DJ, party favors, a champagne toast, and so much more. If you’ve ever been to this spot, you already know that “more” can be to a near-endless cavalcade of possibilities. There’s also bottle service offered if you’re feeling particularly swanky. 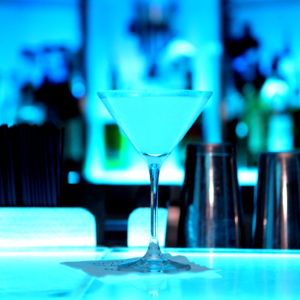 Javier’s in Newport Beach – Music is synonymous with fancy New Year’s Eve celebrations. Often, the type of tunes you hear will be pumping from a DJ booth, a rock band, or a jazz combo. This popular Crystal Cove venue offers something a little different than the expected. A mariachi band will be playing traditional music all throughout the evening as patrons enjoy the venue’s signature Mexican cuisine. You can enjoy a champagne toast at midnight, but nobody would fault you if you substituted the bubbly with a margarita instead.

The Resort at Pelican Hill – There is no right or wrong way to celebrate New Year’s Eve, as long as it’s being celebrated.  This axiom may be why Newport Coast’s exquisite hilltop resort property rolls out so many options for guests to ring in 2019. Andrea and Pelican Grill offer two separate dining options, and there’s also a couple family-friendly choices if you feel your kids can hang until the ball drops. You can also go back in time to celebrate the calendar’s forward progress by attending the Great Room Social Lounge Prohibition Parry, a themed party complete with jazz music, small plates, cocktails, and you in your best period-appropriate flapper and dapper attire. One thing to bear in mind: The bubbly you’ll be having at midnight will be Prosecco – an appropriate touch for this Italian villa-themed venue. 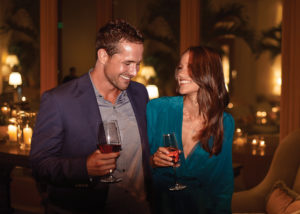 Ten Asian Bistro – If you’re going out to celebrate New Year’s Eve, you may not want to just party. You may be in the mood to par-TAY. Yes, there’s a difference, and know the distinction may want to get their groove on at this Airport District joint’s NYE fete. Revelers will be treated a night of talented local DJs pumping out the hottest jams, spread out over three different rooms. The energy generated by the music and the crowds will sustain you well beyond the midnight champagne toast, which is a good thing. Par-TAYS don’t stop when the clock strikes twelve. 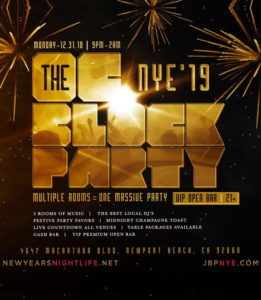 Topside at Lido House – In most of the country, having a rooftop masquerade to chime in the New Year would be a zany suggestion. Newport Beach is not most of the country. It’s a killer idea here, and the Lido Island Hotel’s sleek rooftop bar is bringing it to life. A stunning view of the Balboa Peninsula and Newport Harbor provides the perfect backdrop for a decadent evening featuring champagne, a caviar station, a DJ, and late-night. You’ll have a great time, and you won’t be freezing off your bottom like you would elsewhere (we’re looking at you, Times Square). 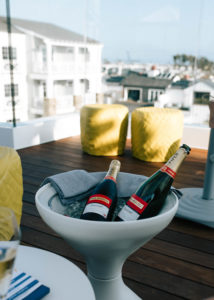 The Winery – We reached peak party as a country in the late 1970s. One of the reasons why was Studio 54, the legendary New York City nightclub that proudly operated under the philosophy of “anything goes,” probably because anything did indeed go. The days of the disco have long since passed, but for one night only, this chic Mariner’s Mile venue will be channeling the club’s singular spirit with “A Night at Studio 54,” an evening designed to put a different spin on pure decadence. Things kick off with an indulgent second seating dinner featuring divine offerings like duo of beef tenderloin and Maine lobster, prosciutto-wrapped Chilean seabass, and bacon-wrapped New Zealand venison. This deliciousness sets the tone for a ribald evening of music and dancing, leading up to an exquisite midnight toast with Taittinger champagne. If you still have a pair of platform shoes in your closet, you may want to break them out.