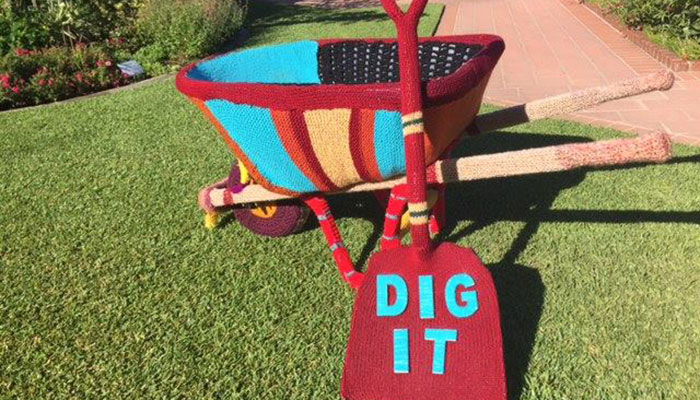 Sherman Gardens has fallen victim to the worldwide phenomenon known as Yarn Bombing.

This artistic revolution of street art known as “knit graffiti” is an international guerrilla movement that started as an underground urban hipster phenomenon and is now embraced by crochet and knitting artists of all ages, nationalities, and genders. Its practitioners create stunning works of art out of yarn, then under dark of night “yarn bomb” public spaces as part of a covert plan for world yarn domination.

Corona Del Mar’s local knit graffiti gang known as the Yarn Bombing Bandits have been lurking around Sherman Gardens all week. They were picked up on surveillance video around the Gardens. the Gardens increased patrols and added extra security but to no avail! The staff arrived at the Gardens on Friday morning to find the Yarn Bombing Bandits had evaded security and completed their colorful guerilla “knit graffiti” assault on the Garden.

While yarn installations may last for years, they are considered non-permanent, and, unlike other forms of graffiti, can be easily removed if necessary. While other forms of graffiti may be expressive, decorative, territorial, socio-political commentary, advertising or vandalism, yarn bombing was initially almost exclusively about reclaiming and personalizing public places. It has since developed with groups graffiti knitting and crocheting worldwide, each with their own agendas and public graffiti knitting projects being run. The Corona del Mar Yarn Bombing Bandits gang agenda is to bridge the generational divide, support community art and remind the world that without plants we cannot knit, breathe, eat or live!

Yarn Bombing exhibit will run through November 22, 2015 and is included with admission.