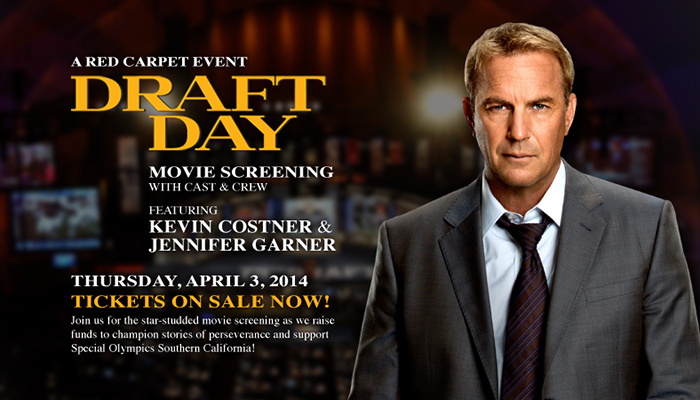 Join cast and crew of major motion picture “Draft Day” for an exclusive screening and the film’s West Coast debut on Thursday, April 3, 2014 at 7:00pm. Priced at $25 per person, the screening will benefit the Foundation for the Undefeated, which champions stories of perseverance in sports to inspire greatness in others.

The event is presented in association with Summit Entertainment—a Lionsgate Company—and will be held at the Big Newport Theater in Newport Beach. The film features Kevin Costner and Jennifer Garner, and Costner will walk the red carpet prior to the special screening, while the film’s director, Ivan Reitman, will introduce the film.

Following the screening, All-Access Pass holders are invited to the Newport Beach Civic Center for a private after party – also benefitting the Foundation for the Undefeated – beginning at 9pm. Attendees will enjoy cocktails, hors d’oeuvres, music, and dancing and will receive gift bags that include a $20 Uber gift card. All-Access Passes include admission to the screening and the after party and are priced at $175.