Anthems UK vs. USA at Back Bay Bistro 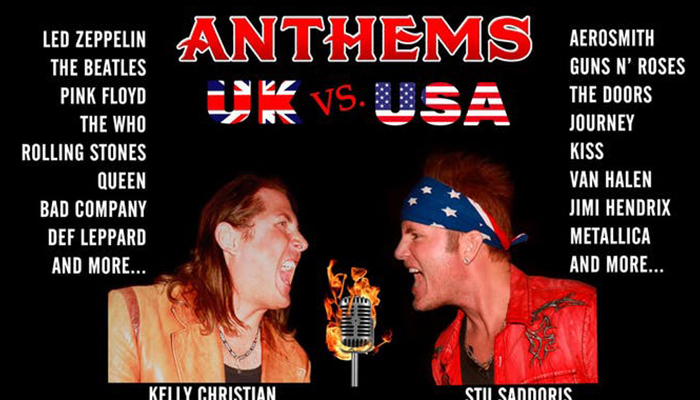 A night of international battle of rock anthems, appropriately named ANTHEMS, brings the traditional concert experience to a new level with ‘song for song’ battle between American and British heavyweight rock legends of the classic rock era.

Some of the battles including The Who versus Guns n Roses, The Beatles versus Aerosmith, Queen versus Journey, The Rolling Stones versus The Doors, Led Zeppelin versus Kiss, Pink Floyd versus Bon Jovi, and so much more. The finale will include a mash-up song featuring both singers battling face to face. This performance will feature Las Vegas’s premiere tribute singer, Kelly Christian of Yellow Brick Road fame, along with former International Recording Artist, Stu Saddoris and his acclaimed tribute band, Trinity.

ANTHEMS is a must-see show that will leave the audience thrilled and ready for more. Dinner seating is available.