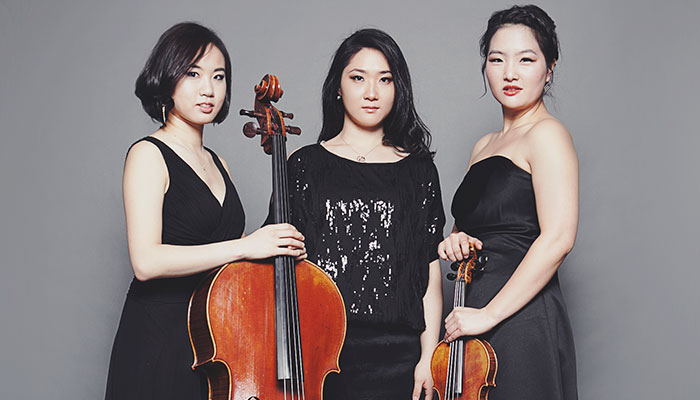 The Newport Beach Public Library presents a Sunday Musicale featuring the Allant Trio, on Sunday, November 16 at 3 p.m. The concert will be held in the Friends Room at the Central Library, 1000 Avocado Avenue, Newport Beach. Admission is free and open to the public.

Allant Trio is an exciting young ensemble featuring pianist Dr. Beth Nam, violinist Anna Park and cellist Alina Lim. The trio formed in 2010 at the Juilliard School, each with extensive and distinguished careers in chamber music and music pedagogy. They have already distinguished themselves by winning the prestigious Beverly Hills Auditions in 2013 and have performed at the Seoul Arts Center in Korea, Carnegie’s Weill Recital Hall in New York City. the Norfolk Chamber Music Festival, the Yehudi Menuhin Chamber Music Festival in San Francisco, The Banff Centre in Canada and Hill and Hollow Music in New York.

This event is funded by generous donations from the Friends of the Library. Seating is limited and available on a first-come, first-served basis.

The Allant Piano Trio is quickly establishing itself as one of the most exciting young ensembles today. Winners of the prestigious Beverly Hills Auditions in Los Angeles in 2013, they were also awarded the Jonathan Madrigano Entrepreneurship Grant from the Juilliard School. Pianist Dr. Beth Nam, violinist Anna Park and cellist Alina Lim formed the trio in 2010 at the Juilliard School, each with extensive and distinguished careers in chamber music and music pedagogy. The trio received coaching and direction from Juilliard professors Toby Appel, Rohan DeSilva, Jonathan Feldman, Clive Greensmith, Nicholas Mann and Vivian Weilerstein.

Most recently, the Allant Trio released their first album titled ‘Ignition’ under Sony Classical and gave a performance of Beethoven’s Triple Concerto at the Seoul Arts Center with the Seongnam Philharmonic Orchestra which was broadcasted by Korea’s MBC network. Through the US Embassy in Seoul, they performed at the Embassy Youth Forum and the US ambassador’s residence in Korea. Earlier this year, the trio also gave a highly acclaimed debut recital at Carnegie’s Weill Recital Hall in New York City. The Allant Trio has participated at the Norfolk Chamber Music Festival, the Yehudi Menuhin Chamber Music Festival in San Francisco, as well as the chamber music residencies at The Banff Centre in Canada and Hill and Hollow Music in New York. They were named semifinalists at the Trondheim International Chamber Music Competition in Norway. The trio performs often throughout the New York City metro area and has given a recital at the South Orange Performing Arts Center in New Jersey.

As passionate educators, they have been sharing their experience with the younger generation. In addition to leading private studios, they have been guest teaching artists at various schools. The trio is also committed in reaching out to communities that have limited access to classical concerts. They have given performances at various community facilities including the Bailey House, the James Lenox House for seniors in New York City and at the soup kitchen of Calvary-St. George’s Episcopal Church.