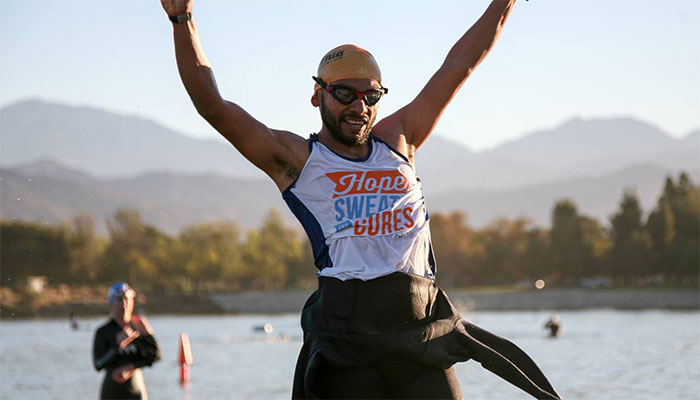 Newport Dunes Waterfront Resort and California Triathlon are pleased to present the 2018 Newport Dunes Triathlon taking place on Sunday, November 4, 2018. The inaugural event will draw participants from far and wide to the picturesque shores of Upper Newport Bay.

The story of California Triathlon races is best represented by a snapshot of the inspiring athletes competing. Of the 750 participants in the Newport Dunes Triathlon, thirty percent are competing in their first race, while the race has drawn a number of professional competitors including Russ Jones who has completed over five hundred events.

The race welcomes participants of all ages and skill levels including the young and young at heart. Among the competitors in the November 4 event include a nine-year-old contender from Monrovia, California, a 76 year-old athlete from Pasadena, California and two blind and visually impaired athletes. The Newport Dunes Triathlon will also draw celebrity competitors like Emmy Award-winning actress, Katherine Kelly Lang, best known for her role as Brooke Logan on CBS’s
The Bold and the Beautiful.

During the Olympic and sprint distance races, athletes will swim in Newport Dunes’ waveless lagoon, bike along the scenic 8-mile circuit which includes the Mountains to the Sea Trail & Bikeway, Upper Newport Bay State Marine Conservation Area and Upper Newport Bay Nature Preserve, and then return to Newport Dunes for the run.

Newport Dunes will feature a “TRI-CATION”
camping experience the night before the race with RV or tent camping options just steps from the race course. Available for both families and teams, athletes and their supporters will enjoy food trucks, s’mores and an outdoor family movie the evening prior to the event. The Newport Dunes Triathlon Village will open on Saturday afternoon for athlete registration & packet pickup, mandatory race briefings as well as check-in for Saturday night campers.

California Triathlon is a 501(c)(3) charity that provides a premium no-fee membership to over 4,500 athletes worldwide.

For additional information about the 2018 Newport Dunes Triathlon, to register and to find out ways you can get involved in this year’s race, please visit newportdunes.californiatriathlon.org.