Time for the Toshiba Classic Tee Off! 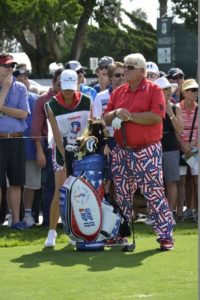 Set for Wednesday, March 7, through Sunday, March 11, expect to see more than 80 of the most recognizable and accomplished PGA TOUR Champions in the game — from 2017 Toshiba winner Jay Haas to all-time greats such as Fred Couples, John Daly, Tom Watson, Colin Montgomerie and many more —competing for a total purse of $1.8 million.

This year marks Hoag Hospital’s 20th anniversary as host of the event, which generates more than $1 million annually for charity. And the new clubhouse also is ready for this year’s tournament, complete with panoramic views of the golf course and Pacific Ocean and rooms that flow seamlessly onto upper-level terraces.

Returning this year is the third-annual Military Appreciation Day presented by Microsemi Corp. Saturday, March 10, with all former and active military members and three of their guests honored on that day with free admission and food and beverage vouchers to thank them for their service. The patriotic morning kicks off with an opening ceremony featuring a color guard procession, national anthem, charitable donation presentations and a C-47B flyover, courtesy of the Lyon Air Museum. Fans also can help the tournament thank the military by leaving a personal message on the “Messages for Military” board found near the admission gate and main putting green. The day culminates with a closing ceremony and “Party on the Pond” on the 17th hole that features live music by John Daly.

On Sunday, March 11, students ages 18 and younger will get in free and have the chance to participate in the Student Day Putting contest and a Kids Fun Zone from 10 a.m.-4 p.m., as well as an opportunity to win scholarships, tickets to local attractions, tournament merchandise and golf equipment. In addition, children ages 11 and younger are admitted free Wednesday, March 7, and Saturday, March 10.

Last, but definitely not least, this year’s tournament will benefit the Mary & Dick Allen Diabetes Center at Hoag for the eighth consecutive year.

To interact with the Toshiba Classic on Facebook, visit facebook.com/ToshibaClassic, and follow the tournament on Twitter and Instagram (@toshibaclassic) for fun social content, behind-the-scenes photos and videos, and contests. And don’t miss the Toshiba Classic’s Social Media Lounge behind the 18th green, where you can check out the Twitter wall, take photos and more. To purchase tickets, log on to toshibaclassic.com/tickets/, call 949.660.1001, or visit participating Roger Dunn Golf Stores with one-day tickets priced at $25 in advance of the event ($30 at the gate). For more information on this year’s tournament, visit ToshibaClassic.com.