Sunset Jazz at Newport Take in the Soothing Sounds 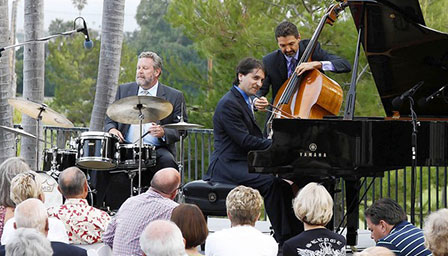 Looking for a mid-week getaway? Check out the Sunset Jazz at Newport Summer Concert Series.

You don’t have to go a dark club on Bourbon Street in New Orleans to hear some sweet sounds of jazz.

Surround yourself in the soothing sounds in a lush rose garden setting at the fourth annual Sunset Jazz at Newport concert series at the Newport Beach Marriott Hotel and Spa.

The seating for the show is intimate, as the Rose Garden has been upgraded with a new beautiful gazebo, ground lighting, and a level Astroturf deck. Reconfigured seating offers better sight lines and more comfortable seating.

The sessions are one hour and there are two sessions each Wednesday night, one at 6pm and the other at 7:30p.

Here’s a little preview of each concert:

July 10: The Four Freshman: A unique vocal harmony experience since 1948.

July 17: Holly Hoffman and the Mike Wofford Trio present an evening of jazz standards as well as selections from their current CD, Turn Signal.

July 31: John Pizzarelli Quartet features the longtime jazz guitarist, vocalist, and songwriter who has had headlining engagements at Carnegie Hall, the Hollywood Bowl, and the Lincoln Center to name a few. He has opened for Frank Sinatra and Paul McCartney

August 7: It’s Jeff Hamilton’s birthday and his trio will celebrate two performances. Jeff is a regular at the Sunset Jazz event and most recently received the prestigious Mainstream Jazz Drummer of the Year award from Modern Drummer Magazine.

August 14: Ken Peplowski, a critically acclaimed clarinetist and saxophone player – that earns comparisons to Benny Goodman — returns with his quartet to the Newport Jazz Party.

August 21: The Dori Caymmi Quartet brings a mix of Bossa Nova and Brazilian sound to the Sunset Jazz event. Dori has performed for 60 years, following in his parents’ footsteps.

August 28: The Byron Stripling/Bobby Flood Quartet is an intoxicating blend of Stripling’s wide trumpet range and Floyd’s passionate piano, organ, and keyboards. They are return performers to the Jazz Party

September 11: Wycliffe Gordon salutes a foundational influence in Jazz in “Hello Pops… A Tribute to Louis Armstrong.” This seven time Trombonist of the Year performs hard-swinging straight-ahead jazz for audiences.

Hotel room options include ocean view rooms for $159 and standard rooms for 139. Ticket prices range from $18 to $40.

For more information go to www.VisitNewportBeach.com/SunsetJazz